Learn More about Finn, Rey and Poe, Moments Before The Force Awakened.

I saw The Force Awakens several multiple many times in the theater, plus a couple lot more via Apple TV since then. Despite all those viewings of The Force Awakens, I still need more of Finn, Rey, and Poe. 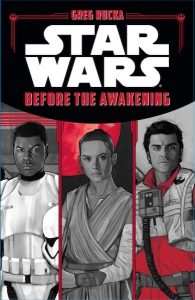 Luckily, Greg Rucka wrote a book called Before the Awakening that gives readers a little snapshot into the lives of Finn, Rey, and Poe immediately before we saw them for the first time on screen in The Force Awakens.

Before the Awakening is a quick, easy read. I knocked the whole book out in just under an hour, which isn’t terribly impressive as it’s a YA book coming in at just 215 pages. But grown men can read YA books, so there.

It consists of three stories, one each for each character. The stories are almost like an “origin” story in a way, and each is engaging. They are also terribly interesting as they add little pieces of trivia to the characters, and provide some fun background to the characters we saw on screen.

So I don’t get too spoilery, I’ll only go through each character’s story very briefly, rather than stretching this into a 600 word post like a tenth grader stretches out an essay.

FINN: Before the Awakening

Finn’s short story was probably the least interesting to me, but that’s not to say I didn’t like it, as it was compelling to get a little more behind-the-scenes of Stormtrooper training in the First Order, particularly when it came to Captain Phasma.

It turns out that Finn was a Stormtrooper cadet who consistently scored in the top 1%, excelling in marksmanship, tactics, and hand-to-hand combat with vibro-weapons (explaining how he could face Kylo Ren, albeit briefly).

Finn also had a sense of compassion and empathy, which made him an outsider in the First Order. But that’s where the story gets interesting and I don’t want to spoil anything.

REY: Before the Awakening

Ever wonder what scavenging was like for Rey on Jakku? (Read more about life on Jakku.) Or have you wondered how Rey was so good mechanically or as a pilot?

Well, Rey’s short story has the same melancholy, loneliness, and sadness found in Finn’s story, but it tells the story of a salvaged flight simulator and the makeshift workstation in Rey’s AT-AT home.

There are some new characters introduced, plus you get more from Ankar Plutt, though mainly through exposition. Rucka’s writing is consistently wonderful throughout the book, but it really shines during Rey’s story.

Poe: Before the Awakening

Poe Dameron’s story is the last in the book, and like the two before it, it concludes just before the events of The Force Awakens. Poe’s parents were critical in the Rebellion, so Poe is simply completing the circle in joining the Resistance.

The short story gives you a nice sense of Poe’s desire to do what is right, plus it introduces you to the other pilots that Poe flew with directly before The Force Awakens.

Again, Before the Awakening is a fast read, but it feels chock full of little tidbits that increase the enjoyability of The Force Awakens, as if that movie wasn’t already fantastic enough as it is.

Greg Rucka is a fantastic writer, both in characterization and action. It’s an inexpensive hardcover and you’ll be glad you gave it a read. I can’t picture the crazy banana pants human who wouldn’t want a little more time with the main characters from The Force Awakens, and this book gives you that in a wonderful way.