By the time I made it into the theater to see Independence Day: Resurgence, I had seen enough reviews and been warned by friends to know that I wasn’t walking into an Oscar-worthy movie.

The sequel to 1996’s Independence Day is set 20 years from the end of the last movie and the basic premise is that the aliens have finally received a distress call and, spoiler alert, it is round two of Earth versus the unnamed aliens.

I have to say, it isn’t an abomination of a movie…but it isn’t great. When it hits your favorite streaming service, you should put it on, then fold laundry and do your chores, sort of paying attention. 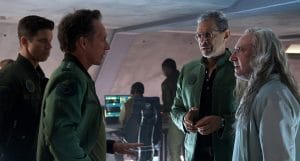 As I watched the movie–in the midst of the lawyer becoming the warrior and someone mirroring Randy Quaid’s sacrifice from the first movie–there were a couple mentions of plot ideas that I wish they had completely invested in.

One: a generation of orphans. Sure, we all watched in the first movie and saw massive destruction of major landmarks all around the world. After doing that, there would have been potentially millions of orphans that the world would then have to raise.

In the film, two of the main characters turn out to be some of those orphans and have turned into pilots for the army.

So here is my proposal: a television series that is all about the schools and boarding schools that are created after the first war and watch as the world has to turn a generation into warriors first, civilians second. Throw some teen angst in there and see the drama unfold as the students who aren’t good warriors have to survive, as there are hardcore drill sergeants that wreck their life.

It has a ton of potential in storytelling and could work as a television premise without needing the massive budget of the films. Also, part of the movie reveals that the world has merged human and alien technology, so you could have a couple nerd kids who are part of that process and we could watch their successes and failures. And you also could play with some of the politics that are hinted at in the movies: that those with parents are given higher visibility than those that are orphans.

Two: at one point, we see one of the alien crafts from the first movie had landed and never left at the end of the first movie. And in what potentially leads to an interesting discussion about the current political situation, the ship (and its inhabitants) are left alone; I took from it that it was left alone because it was in Africa.

Through the movie, we meet the son and successor of the warlord that had led a guerilla war against the surviving aliens. Again, it is a story that sounds like an interesting thing to explore, as at the early stage of the story, the Africans would clearly be outgunned, the other countries refusing to help, and them learning how to do everything that they can to survive and win the war. 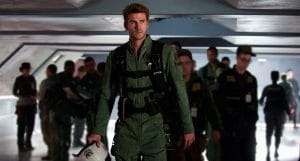 Three: broaden the world. The danger of the sequels is that they focus on the characters from before and, in a world spanning situation like what is happening in Independence Day, it just shrinks things so much.

For instance, the president’s daughter from the first film winds up as some sort of advisor for the new president. I certainly understand the desire to keep moving those stories forward but, just as they quickly wrote out Will Smith, they could move the focus into other areas.

Lastly, this movie definitely seems like a play to launch more movies, presumably before 20 years from now. Some of the key ideas in the plot lean this way. (Spoiler: another alien group wants to equip the earthlings for the fight against the aliens.)

But also, they have done some things that are clearly smart plays in filmmaking; for instance, nearly everyone wanting to launch a franchise is making sure that the movie will feature other markets; Independence Day: Resurgence has a Chinese female pilot and some leadership that are prominently featured. Cynically, it is an attempt to make sure that the large filmgoing market in China embraces this movie. But that strategy has allowed some domestic US movies that flopped succeed and even potentially garnered sequels, like Terminator, Pacific Rim and Warcraft.

So, while Independence Day Resurgence isn’t great, it did create some interesting intellectual property ideas that I hope potentially get explored in other mediums as they were forgotten but promisingly introduced.

The Glass Cannon Podcast: Episode 58 – How Della Got Her Groove Back

Learn More about Finn, Rey and Poe, Moments Before The Force Awakened.