The Force Awakens has taken the merchandising world by storm, and it is glorious! With a new Star Wars movie comes new Star Wars Legos.

I already have Rey’s speeder, I’ve upgraded to the new Millennium Falcon, and I will likely be writing a full “building Jakku” piece at some point. However, today is my review of Lego Set 75102: Poe’s X-wing! 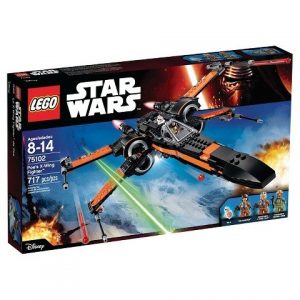 Poe Dameron is one of my favorite characters from the new movie. He is getting all the due that Wedge Antilles and other X-wing pilots deserved! And I can’t wait for Rogue One to come out! But that is a post for another time.

The real coup here is BB-8!! Many think that BB-8 stole the show in Episode 7, and he certainly is a nice little mini-fig.

The ground crewer has his equipment hover caddie, which slides better on carpet than on a tabletop (pro-tip). On the caddie are two extra missiles and 4 extra blaster pieces (which you will need eventually because we always lose at least one projectile), a wrench, and a hand blaster.

I feel like eventually I will need a new term to delineate between the blasters that actually shoot Lego pieces and the ones that are just accessories. Hopefully, we are fine without it for now.  The non-descript pilot also has a hand blaster accessory and there is a ladder for Poe to get in and out of the X-wing cockpit, though that is it for extras.

The rest and bulk of this set is the X-wing itself. For those of us who have seen the movie, this is actually Poe’s second X-wing, but in my head, it is actually his primary X-wing and the one that gets blown up on Jakku was one he used for the undercover mission of tracking down the map to Luke. However, I digress. 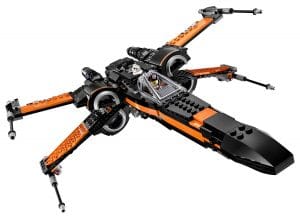 Poe’s black and orange X-wing is just awesome! And as I built it, I noticed so many differences between this new style of X-Wing compared to my old X-wing set 6212.

Both sets have a few unique, or at least harder to find pieces such as the cockpit glass pieces.  The engine sections are completely different from one another, as well as the wing guns. You’d likely have a hard time having enough extra parts on hand to rebuild either easily, but both are doable.

One major difference between the two are the spring loaded missile shooters on Poe’s, as well as the blaster, which shoots small Legos. A feature that makes Poe’s somewhat easier to rebuild with spare parts is the absence of the special gear piece that makes the s-foils go from flight mode to attack mode.

Funny side story about that: I had the X-wing in attack mode and as I set it down on the tabletop, the spring loaded shooter went off before I was ready—insert premature ejection joke here. Needless to say, be careful about leaving your spring shooters loaded while constructing. 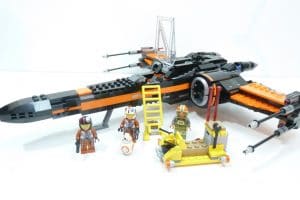 Clave and I have a little nerd exchange going where we trade Lego sets, because building is the fun part. Before I give Clave his X-wing back, I think I am going to take both Poe’s and Luke’s X-wings and rebuild both then finish the custom one I was constructing. I can’t wait!

For this particular set – #75102 – I have to give it an 8.9 out of 10 Nerds.  I’d say for the price (it lists at $79.99), I would recommend you wait for it to go on sale, but the supply and demand is making it difficult to find right now.  That said, it is a VERY cool set and probably one of the more well-constructed Lego sets out there!

How I Learned To Love (Or At Least Tolerate) The Quarantine

Get Hyped—Alphabet Squadron is the Real Deal