Per tradition, one of my Christmas gifts was a Lego set. In the midst of all the Star Wars The Force Awakens merchandise drive my wife threw me for a loop when she remembered I wanted the Avengers Tower.

Meanwhile, Clave got Poe’s X-wing and he suggested that he and I could swap at some point so we can get to build each set. Brilliant! 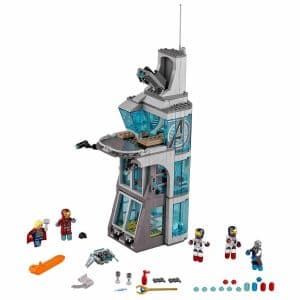 So I quickly built Lego set 76038, Attack on Avengers Tower. Avengers Tower is probably more of a mid-range set at 515 pieces and frankly, when all was said and done, I did hope the tower would be a little taller. However, this set plays big!

Included in this set are some sweet mini-figs:

While these mini-figs provide more than enough action, I couldn’t pass up adding Captain America to the party. Likewise, when I was play…er uh, exploring creativity with the set, the tower endured an attack from the Green Goblin. Then Spider-man, Power Man, and Mary Jane also joined the fight. Alas, that is fan fiction for another time.

The tower is simply a great set at the $50 price range it normally sells for. Each level has two plot crucial areas designated. 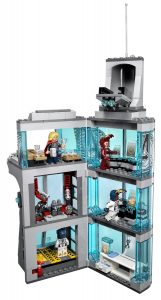 The tower also has loads of cool details and moving parts. For instance, the entire tower is on hinges so it can open when in use and close when it needs to go back on the shelf. In addition, if the team is on the balcony enjoying some drinks and there is an attack, there are swinging guns that can be activated, though if there is a direct hit to the balcony, then the team will go flying!

The set also has a flying attack pod that comes from the top of the tower and a couple hidden guns for the team to use in a pinch. Some of the other cool details are the windows where Ultron ends up can pop right out and the area where the Iron Legion soldiers come out also have tracks so they can swing into battle.

Moving parts are always a big bonus with this nerd.

I am beyond satisfied with this set and wouldn’t trade it for the world. Well, except when I trade Clave for Poe’s X-wing. But then I’ll get my tower back of course! 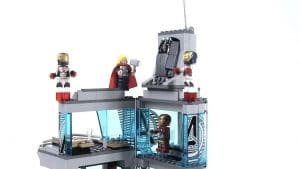 I know that price can be a factor with Lego sets, whether you are buying for your own personal collection or to give as a gift. It might be hard to justify $50, but if you buy this set, you will NOT be disappointed! This set has really made me want to expand my Marvel Lego collection.

I give it an 8.9 Nerds out of 10 and that is extremely high for a mid-size set. My dream now is that I could buy an extra tower and customize the set to be even larger, and as I searched google images, I see I am not the only one who had that idea!