By Clave Jones On Sep 22, 2016 Last updated May 7, 2018
Share TwitterReddItPinterestFacebookEmailPrint 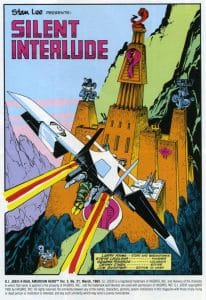 I was fortunate to be able to hear straight from the man himself how the famous GI Joe #21 “Silent Issue” came to be. So here is Larry Hama’s telling of not only the process of GI Joe 21, but also the storytelling techniques behind it.

Larry said he had been an artist for 15 years and had been dying to actually write a book. And although toy-based comics were considered career suicide in the early 80s, Larry Hama jumped at the chance to write GI Joe when editor-in-chief Jim Shooter was going office-to-office begging for volunteers to write the Hasbro property.

Fast-forward to GI Joe 21, where the comic was falling behind schedule and they did’t have any pages in the reserve tank. Marvel needed the comic in a week, whereas a typical comic pipeline is 3-4 months.

But Hama knew if he was both the writer and artist, he could speed it up. Besides, not lettering it would save a week as well. So according to Hama, the word-free “Silent Issue” was completed in 3 days, which is looney-bin-banana-pants fast.

So let’s look at the story of GI Joe 21 and how it was told.

Hama the first splash page established everything, both the location for the story as well as the main characters with Storm Shadow swooping down toward a castle.

Hama admitted that the insane schedule meant a few coloring mistakes snuck through and he had to make some simple retcons for the sake of the story. An example is that with a prisoner on Storm Shadow’s back, Hama had nowhere to place the ninja’s sword. Hama was drawing as he went, entirely without a storyboard, so he didn’t have time to redraw earlier panels. His simple fix was to sneak in a quick panel that had a minion hand Storm Shadow his sword. 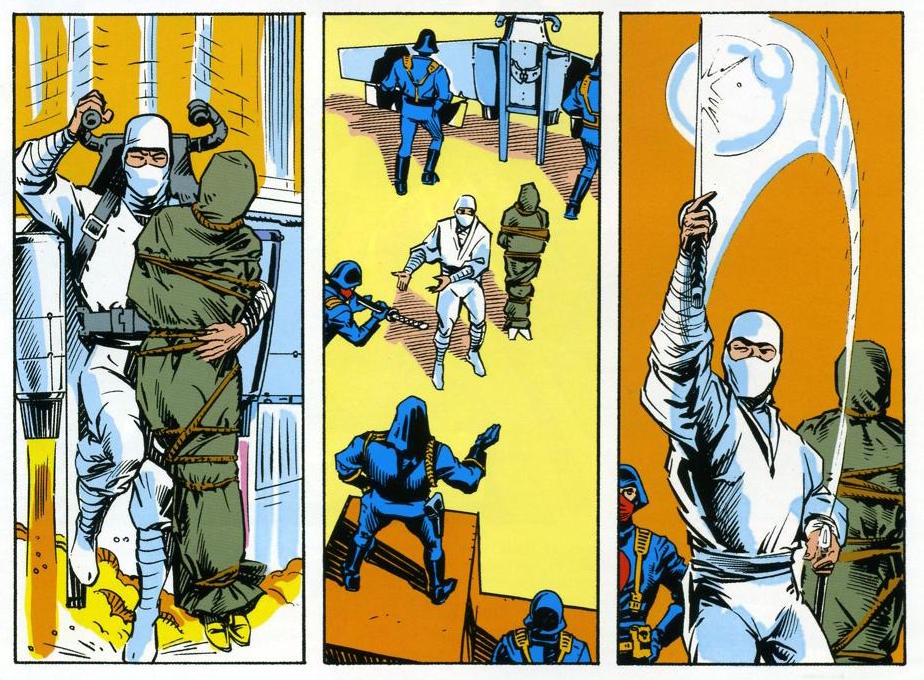 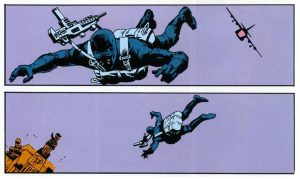 Another continuity error was when the dome cover was supposed to be closed when Scarlett was imprisoned. Still, the simple, efficient backgrounds easily let readers immerse themselves in the story. An issue, it should be remembered, that was written and drawn in only three days.

When a new character was added to the story, the readers were easily situated in the setting, having seen the approach to the castle before. The fact that the introduced character was Snake Eyes made fans high five themselves as they silently read the issue alone in their bedrooms.

When backgrounds or props were drawn by Hama, they were used to great effect. The chess pieces that Destro used illustrated both his machinations, while also dropping hints and teases about other GI Joe characters (dead characters were shown as pawns off the board).

The window in Destro’s office was also used both to situate his presence in the castle, while also setting up a future prop point when a fallen Cobra soldier dropped past the window as he succumbed to Snake Eyes blade.

Other backgrounds were drawn extremely judiciously, yet illustrated the setting beautifully. When Scarlett was escaping, one panel had just a few straight lines, but they were colored in to illustrate stairs. Clever tricks like that are how a master storytelling writes and draws a comic in three days.

Hama said he is much more interested in cause-and-effect storytelling as opposed to lots of posed action fighting. Hama’s illustrations move the action along quickly and display a strong sense of movement, and in the case of this issue, using no words to describe action.

Hama got art physics coaching from Neal Adams, who say in the cubical beside him and constantly prodded Hama to challenge himself in order to improve his craft. “Don’t settle,” Adams would say.

Interestingly, Hama was drawing a military / war comic, yet didn’t place story emphasis on the action. In addition, most violence was “shown” off-panel. Readers imagined it, rather than viewing it explicitly. Instead, Hama felt the strength of GI Joe was the camaraderie, not the action, and his deep emphasis on the characters is what (I believe) makes GI Joe comics such an enduring memory in comics. 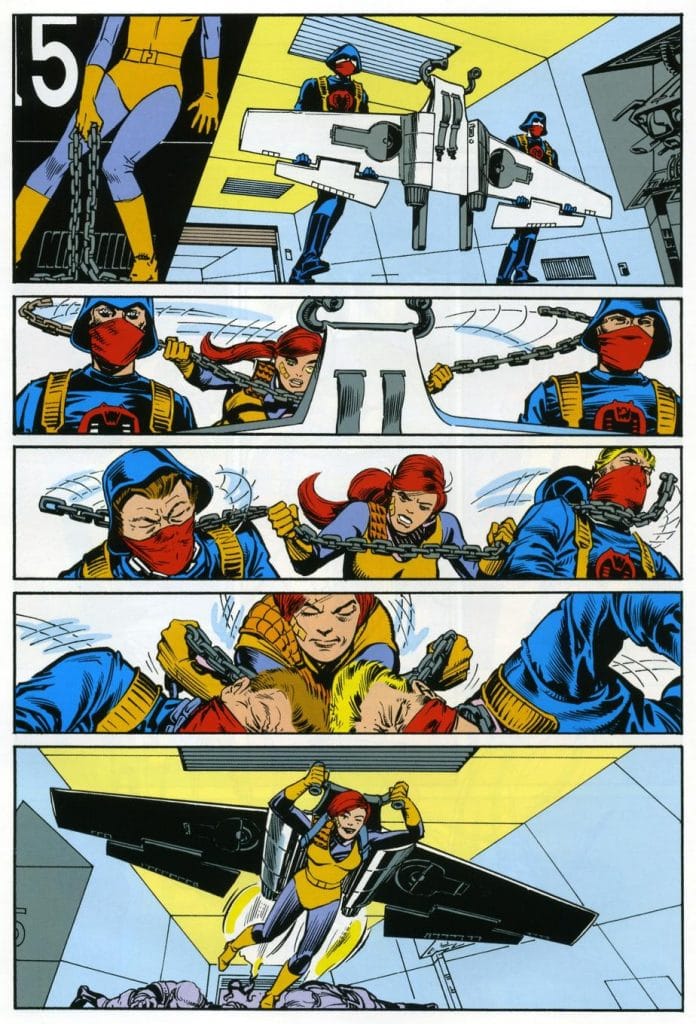 In a comedic moment, Scarlett finally makes her escape by easily taking out two Cobra troopers who conveniently were carrying a flying wing around the castle. Meanwhile, Snake Eyes takes out three red ninjas in turn before his confrontation with Storm Shadow.

Snake Eyes took out one ninja with a grenade, the scene a fair corollary to the famous Indiana Jones moment where he simply pulls out a pistol and shoots the opposing swordsman. Hama joked that the grenade saved him a panel, which he needed as he was plotting the book as he went.

Giving Snake Eyes and Storm Shadow the same tattoo was also a decision that was made as he drew a panel. And the simple tattoo design was a trick so it would be easy to remember, lessening the chance he’d flub it up when he drew it in future panels.

But the matching tattoos ended up being the big reveal of the issue and a major character plot moving forward. It was yet another example of Hama’s focus on character over action. (And speaking of characters, Hama said he often based them off real life people he knew. Will Bill, for example, was based on an attorney in Texas named Bart.)

As the issue ends, Scarlett ends up being the one to rescue Snake Eyes as she was never a damsel in distress. But the mission of Snake Eyes wasn’t wasted, as readers not only were treated to an action-filled comic book issue, they got to see the great character moment in the tattoo reveal and were given a master class in storytelling. 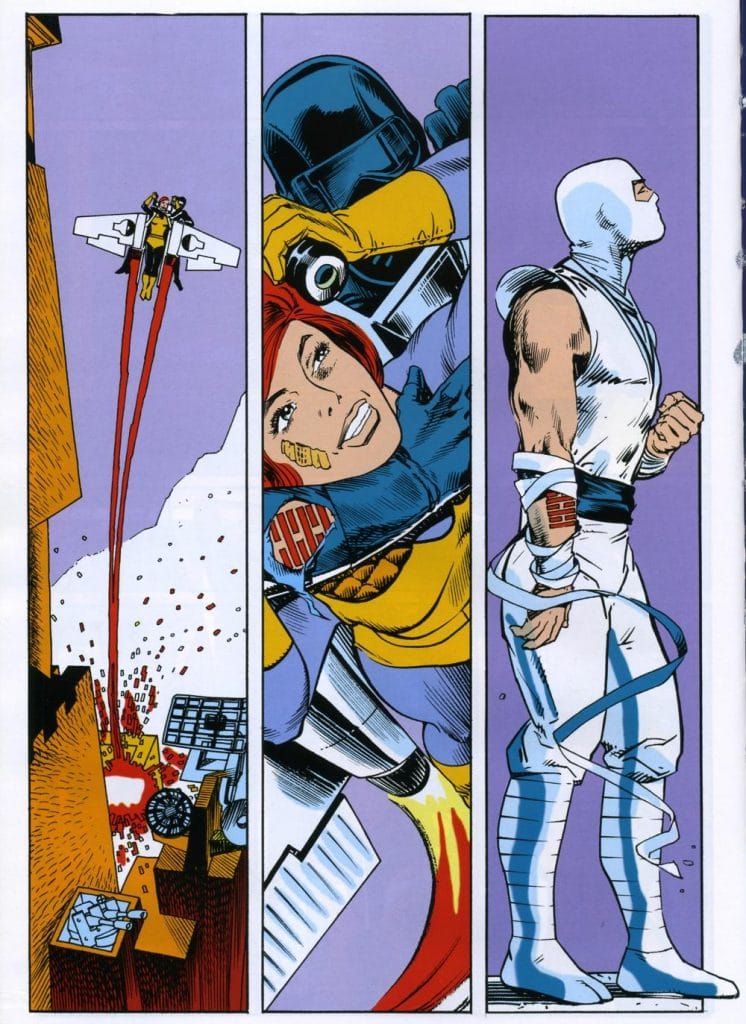 I can distinctly remember buying GI Joe 21 off a drug store spinner rack as a kid who was about 8 years old. I bet I read it a dozen times, marveling at the action, characters, and art. I didn’t have the same appreciation for the process then as I do today. I certainly didn’t know it was done in only 3 days and included no words primarily to meet a deadline.

But I know that now, and knowing is half the battle.

You can find GI Joe scanned in its entirety here. You can find the comic collected in print: GI Joe Classics, Volume 3 #21-30

A Recap and Review of Agents of SHIELD Episode 401: The Ghost

GI Joes Are Back! And They’re Totally Rad, 80s Kids!