When most people think of the Marvel character Ghost Rider, they think about the motorcycle riding character Johnny Blaze, who made a deal with a devil in order to save his father. The character even goes farther back to the era of the American Wild West in Marvel history. But the motorcycle riding Johnny Blaze is the most famous one, namely because of the film depictions where Ghost Rider is portrayed by Nicolas Cage. 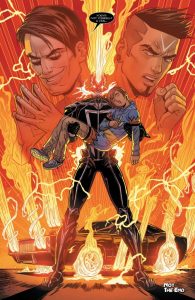 So when Marvel’s Agents of SHIELD made the pronouncement that Ghost Rider would be prominently featured in the fourth season of the show, it was a bit of a head scratcher. Honestly, the Johnny Blaze version didn’t fit. At all. But upon investigating a bit further, and now having seen the season premiere, the Ghost Rider that is going to be featured isn’t the classical one we know and love but instead it will be Robbie Reyes.

In 2014, as part of one of their reboots, Marvel started a new Ghost Rider series, written by Felipe Smith, drawn by Tradd Moore and colored by Nelson Daniel and Val Staples. This creative team took some of the key elements of Ghost Rider and that backstory, while giving them a much different spin as a modern character.

First, a tragic backstory with a character with really not much to lose. This Ghost Rider is Robbie Reyes, a high school student that is growing up in East Los Angeles, parent-less and caring for his little brother, who is wheelchair bound.

The early part of the first arc, Engines of Vengeance, is spent showing how awful Robbie and his brother have it (his brother’s wheelchair is stolen by some neighborhood gang members, who then beat up Robbie when he tries to intervene), and establishing that Robbie winds up in the wrong place at the wrong time. A car he is working on in the shop where he works after school is also the car of a drug dealer. When Robbie steals the car for a race, he winds up in a battle with paramilitary soldiers who kill him.

Second, the resurrection and debate about what to do with power. Robbie is resurrected when Ghost Rider restores him, along with the car, and the three of them become some kind of symbiotic fighting machine. Robbie eventually has to come to terms with the idea of does he use the power that comes with this demon, named Eli, and if he does, which way does he use it.

The main villain in the arc winds up being Doctor Zabo/Mister Hyde, which makes the choice to use Robbie even more curious for the show, as Zabo has been revealed to be Daisy/Quake’s father.

The comic is definitely worth checking out. (You can find it here.) Smith is an excellent writer and the unique art style gives the book some uniqueness that is missing from most of your standard fare superhero comics. The fights are especially great as you see Robbie, Ghost Rider and their 1969 Dodge Charger all work as one unit together in some unique ways.

So, what about SHIELD?

Robbie will be a sympathetic character eventually. We already see that being foretold when he picks up his wheelchair bound brother at the end of the first episode. Yes, he will have done some awful things but it will be in the name of justice and vengeance against those who have been hurt, which is why his comments about his victims in the fight with Quake are important. Ghost Rider has a code; it just may be very, very distorted from normal.

Ghost Rider works as a bridge between the street level heroism of SHIELD and the magical world. If the idea of magic being made prominent in this season (at least until the November 4th release of Doctor Strange), Ghost Rider is an excellent way to introduce and use that without going all the way to the full on mysticism that is likely in the movie Doctor Strange. (The other demon who now “possesses” May seems to fit into this theory. 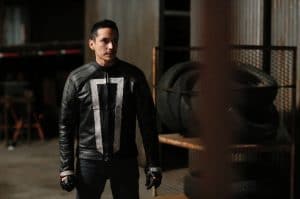 Ghost Rider is a character who can be superpowered on a budget. They have done a cool character design, along with some special effects to make Ghost Rider work as a television character.

My guess is that the Ghost Rider storyline, centered right now on his war on criminals that Daisy is also tracking down, will have a mid-season climax, with the decision on whether or not to keep Robbie around depending on fan reaction and critical reaction between now and then. He is a great minority character who could be a shot in the arm, or he could fizzle out.

Regardless, it is an interesting gamble by SHIELD this season.