From the earliest announcements of their deal with Netflix, Marvel wanted to move individual pieces steadily together to create a new team, a television version of the movie Avengers. So as shows like Daredevil and Jessica Jones have been critically received and the franchises have moved forward, all things are pointing toward a Defenders television series. But, who have the Defenders been in Marvel comics? And who do we think will be a part of the show?

Who are Marvel’s Defenders?

The Defenders started in the early 1970s and it truly was a book that seemed to be a place where Marvel put the pieces that it couldn’t fit into the Avengers. In the comic book tier, it seemed like the Avengers were the non-mutant alpha dog, with Champions of LA pulling up the rear, leaving the Defenders firmly wedged in between.

This ragtag team had an initial line-up of Namor, Doctor Strange, the Hulk and, eventually, the Silver Surfer. over time, there were constant line-up shuffles and part-time members, so that characters like Luke Cage, Nighthawk, the Valkyrie and Hellcat became regulars.

One of the key ways that Defenders seemed different from the Avengers is that they never quite seemed to generate a key character that was a “true” Defender, in the way that Hawkeye, Vision and the Scarlet Witch, among others, became “true” Avengers. The book felt like a ragtag group of heroes who never quite gelled, which is astonishing as it lasted until 1986. 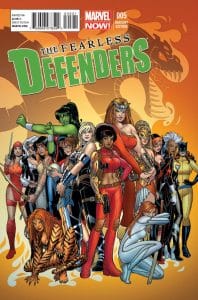 Several attempts have been made to reclaim and reboot that Defenders title since then but none have really seemed to click, despite having some of the top creators on the books.

So when Marvel claimed the name for the Netflix series, it seems to be a name that they wanted to use without a ton of connection to the past. Now, the fanboy part of me would love a scenario where Benedict Cumberbatch signed on to do a Netflix series as a part of his Marvel contract, the Valkyrie that they are introducing in the next Thor movie is a part of the team and they go full on weird. But the realist in me says that a Defenders show will be based solely on the core characters of the Marvel Netflix universe and a few side parts added in.

The likely Defenders line-up is:

And, in a fit of wild speculation, I think that the shows seems to be indicating three other members of the team, based on their presence in the shows.

The central question of the series will be what brings them together as a team. While the Punisher could be a potential villain, as he was in Daredevil Season 2, it seems more likely that the Defenders will be fighting the Hand, with some potential organized crime ties that might let the Kingpin return on the scene.

Regardless, this move with a Netflix street level universe and a team around it is just as bold as the original plan with the Defenders and I look forward to seeing what it brings.