Halloween no longer feels like a single date on the calendar.  The whole month of October is full of discount candy aisles at megamarts, haunted house attractions (many opening their doors on October 1st), and a significant increase in featured horror movies on television and our preferred digital streaming services.

And while that’s not all bad, it’s not exactly all good.  Not all horror movies are created equally, nor are all horror movie antagonists created equally.  In some cases it can be fun – like when you know you’re watching a B-movie horror (and its even more fun when the producers and directors of those movie know and embrace that they’re making a B-movie).  But its pretty sad and self-defeating when a horror movie attempts to scare you with a big-bad and he/she/it falls flat.

So I’m treating you to two lists this week aimed at pointing you towards some reliable horror movie material.  This first one focuses on horror movie antagonists that were at some point real people, even if they are no longer so.  The next list will focus on monsters, aliens, and other entities that have no historical claim to once being human.

Here are my Top 7 Horror Movie Villains (in no particular order):

That’s right.  The villain from a PG-13 movie made my list.  Actually…it surprised me, too.  There are two things I really, really dig about Diana: 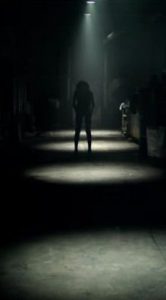 Chucky scared the mess out of me when I was a kid.  And there were layers to this fear: 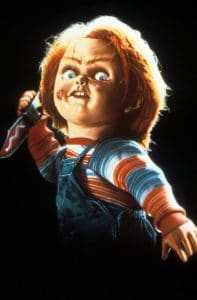 Alas, Chucky slowly took on campier tones and I lost interest and respect.  However, his most recent movie (which went direct to video) returned him to his scary roots and is worth the watch!

I’m a sucker (pun totally intended) for a good vampire movie.  They have so much going for them that adds to their mysticism and fright:

Listen, not many people are lining up to be turned into any of the other villains on this list.  But in most (if not every) franchise that vampires are featured in, there are groups of people that want to become vampires.  That puts them on a whole different level in my opinion. (Click here for our list of top 7 vampires.)

While I’m not really a fan of the Saw franchise, I have to admit that Jigsaw is a twisted and frightening villain for sure.  He stages people in elaborate, macabre, and deadly scenarios, but never without giving them an “out” that usually forces them to take a flaw or bad habit to its extreme in order to escape. 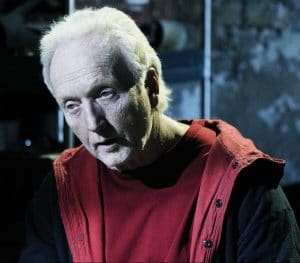 Oh, you like to watch others and play the snitch?  Cut that key out from behind your eye to unlock the trap attached to your neck.

You like to peddle drugs?  Find the key to the door before you in this pit of rusty hypodermic needles.

Part of what made Jigsaw so darn scary is that he parades around as a good guy – as if he’s really got your best interests at heart.  Pass my test!  Become a better person!  Or don’t and the world is rid of you.  Either way, the world becomes a better place.

I only watched the first two so I don’t know that this pattern survives beyond them, but that twisted benevolence was sick and haunting.

The Firefly Family – House of 1000 Corpses, The Devil’s Rejects

When I watch most of the other villains on this list, what I’m seeing them inflict upon others is violent and frightening.  When I watch the Firefly family at work, I add qualifiers like “deeply disturbing,” “unbearably discomforting,” and “vulgar” to the list. 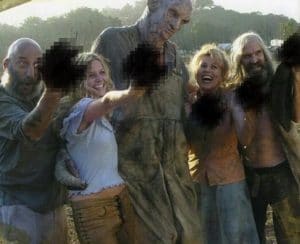 These guys and gals are distilled and concentrated psychopaths; so much so that I can’t stand watching them.  My reaction to their actions is so visceral that I literally just can’t.  I can marathon any of the other movies represented on this list without so much as batting an eye, but Rob Zombie’s deranged family is too much for me.

They’re not supernatural.  They’re not forces of nature.  And I think that is part of what makes them so darn scary – they’re just people with no filters, boundaries, or remorse.  They’re supremely believable and that is supremely frightening.

If I had thought to put this list into some kind of order, Michael Myers would be #1.  He is hands down one of the best examples of excellent horror movie antagonists and has been for almost 40 years. 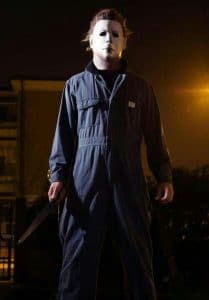 His blank features, his absolute silence, his steady and unrelenting gait, his near indomitability…He really does seem like a force of nature in the movies.

And this has always struck me as odd given his lack of character.  He doesn’t really emote, he doesn’t express or explain himself, there’s no “getting to know” Michael Myers…And I think that is part of what makes him work:  You don’t understand him, so there’s no negotiating or empathizing.  All you know is that he’s coming for you and that no matter how fast you run, he’s going to catch you without ever having more than one foot off the ground at any time.

They’re not pulling up short of your barricade.  They’re not frightened away by the loud bang of your gun.  They’ve got one thing and one thing only on their minds:  Your mind.  And while they scream for our brains, what they’ve really captured are our hearts. (Click here for our story of how real life zombies come to be.)

Don’t forget to tune in on Thursday for my Top 7 Horror Movie Monsters list!