Ron Glass and the Enduring Legacy of Shepherd Book

No matter how divisive things have gotten in our culture, there is one absolute truth that has not failed to unite people from red states and blue states, atheists and Christians, Yankees fans and Red Sox fans… That truth is this: 2016 has been the worst.

The litany of beloved pop culture icons we’ve lost this year is staggering. I won’t even attempt to list them all, but here are the ones that have stung me personally because of their place in my own cultural experience: David Bowie; Lemmy Kilmister; Leonard Cohen; Glenn Frey; Arnold Palmer; Alan Rickman; Gene Wilder; Barry Jenner; Garry Shandling; Prince; and, most recently, Ron Glass.

Ron Glass and the Enduring Legacy of Shepherd Book

It’s possible that, outside of Lemmy Kilmister (Motorhead was ubiquitous, but niche) and Barry Jenner (never more than a character actor, albeit a good one), Ron Glass is the least famous name on my list. Or maybe the least well-known one. But to many of us here at Nerds on Earth, and to many of you who share our love for Firefly and Serenity, Glass’ turn as Shepherd Derrial Book is one of the most consequential. 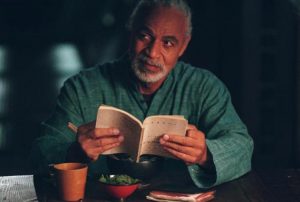 It’s easy to overlook Shepherd Book’s importance in Firefly’s milieu. The show (and subsequent movie, and comic books, but I’ll use the show’s title for simplicity’s sake from here on out…) is, at heart, about a group of people trying to be free.

There’s the principled liberty-minded captain, the loyal comrade-at-arms and second in command, the cautious and practical pilot, the action-loving mercenary, the free-spirited mechanic and engineer, the cultured and worldly companion, and the fugitives who also want to contribute… And into their midst comes the disciplined Man of God…?

As the crew (and us, by extension) gets to know Shepherd Book they discover that he isn’t as simple and straight-forward as they initially believe, nor as straight-laced. We learn that Shepherd Book loves a good laugh, and is apt to do it over unexpected things. We learn that he has a dry and quick wit, and can keep up with even the most educated and acerbic conversations.

We learn that he isn’t a hellfire-and-damnation preacher so much as a caring friend in need, a shoulder to cry on, an ear to listen, and a voice to speak truths that are as simple and gentle as they are challenging. We also learn that he is fiercely committed to the Truth, in whatever form it takes, and to protecting and defending those who are in need of it.

By all accounts, this could be an accurate description of Ron Glass the man, too. As news of his passing spread, the cast of Firefly, along with creator Joss Whedon, shared thoughts and memories on social media. It’s worth the read, I promise.

And just as Ron Glass seems to have been, in many ways, the heart of the Firefly cast, Shepherd Book was the heart of the Serenity’s crew. He restrained Mal’s anger and challenged him to remember his humanity. He showed Inara grace in an environment where she had come to expect none. He cared for River as a daughter and opened her eyes to faith. He met Jayne without judgement, if not without disapproval. He was what each person needed him to be.

In many ways, I think Shepherd Book’s portrayal on Firefly is maybe the show’s greatest legacy. As a Christian myself, it’s easy to be discouraged with the way that religious belief is portrayed in science fiction, which seems to be inherently post-religion. In sci-fi, people of faith are either the quaint and misguided primitives of the Star Trek universe, believing in either something that doesn’t exist or is easily explained by scientific means; or they are the evil death-cult of The Chronicles of Riddick, drawing on some monstrous and mysterious power to subjugate and control others.

Shepherd Book drew on something else, something that I believe is far more common in real life than we are ever led to believe by pop culture – a strain of faith that is inherently good, others-focused, devoted to God not out of a sense of personal gain but out of a realization that we are all broken and in need of a savior. And it is to Joss Whedon’s massive credit that he allowed Shepherd Book to be just that. There was never a moment on Firefly where Book was portrayed as anything less than honorable, caring, and just, but also human. There was never a moment when his belief system was either explicitly confirmed or denied by the show. He was simply allowed to be a person of faith among a group of people who did not, or did not fully, share his beliefs.

I’m eulogizing Ron Glass a bit here, but I fully recognize that I’m also eulogizing Firefly (again…) and honest, reasonable portrayals of religious faith in pop culture. I don’t mean to conflate the two, and I certainly don’t mean to disrespect Glass’ memory by turning his death into a teachable moment. I do think it’s interesting that a man who graduated from seminary, and who was a professing Buddhist, was so instrumental in creating and bringing to life a character who leaves such a legacy on pop culture and sci-fi. I think that Ron Glass probably shared a lot in common with Shepherd Book, and we will miss them both.

What to Watch December 2016 on Streaming Services