With the Doctor Strange movie due out in US theaters in just a couple of days, we thought we’d give you a very quick primer on a few of the tools the good doctor has at his disposal.  He comes pretty well equipped as it turns out!

The first two items on the list (The Cloak of Levitation and Eye of Agamotto) appear to be visually confirmed in posters, trailers, and the like – although we won’t be sure they’ll function exactly true to the comics until we watch the final product.  In the very least, you’ll have a good idea of what they might do going in!

The latter two (The Orb of Agamotto and The Book of the Vishanti) haven’t been seen and may make no appearances in this first installment, but they are such big deals in Doctor Strange’s lore that they will undoubtedly show up before too long so why not go ahead and discuss them now? 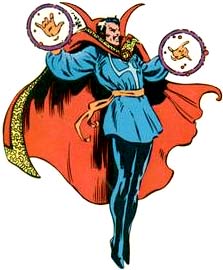 As the saying goes: “It does exactly what it says on the tin.”  The flowing red cloak invariably depicted with an amazing popped collar look is given to Doctor Strange by The Ancient One who will be portrayed by Academy Award winner (Best Supporting Actress) Tilda Swinton, so odds are fairly high that’s how it’ll be introduced cinematically, too.

While Strange could fly or float with a spell, the cloak permits the feats much more efficiently.  He is rarely without it and it has become a staple addition to his iconic look across mediums.

A quick note on who Agamotto is given that his name is attached to half of the items on this list.  Agamotto was born in a tear from Oshtur, one of the Elder Gods (in this case a Goddess).  He was the world’s first Sorcerer Supreme and is one third of the trinity that comprises the Vishanti along with Oshtur and Hoggoth.  The Vishanti are basically the omnipotent patrons of the Sorcerer Supreme in his quest to defend the earth from evils.

The Eye of Agamotto is typically depicted as an amulet or large polished stone that Doctor Strange wears around his neck or as the clasp to the Cloak of Levitation.  The Eye itself actually resides within the stone (it isn’t the stone itself) and emanates from within when invoked.  Close up images of its movie depiction make it look like a closed metal eye, but we’ve seen it open (here and here) revealing a green glowing stone within.

It does all sorts of nifty tricks: 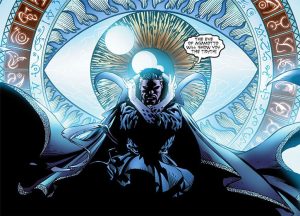 As best I can tell, the Eye of Agamotto is not a focus nor is it a channel for Strange’s powers.  It has a power all of its own and it is not where Doctor Strange gets his magic..  This makes it different from, say, the wands from Harry Potter (channels) or the power coins from the Power Rangers franchise (sources). 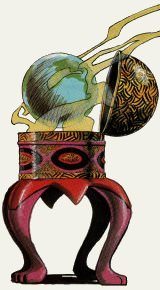 The Orb is a scrying device that is housed in the Sanctum Sanctorum, Doctor Strange’s New York mansion.  It can also be used kind of like a magical Cerebro in that it can detect magical items and beings, but this particular ability can be negated by powerful enough beings who wish to remain unnoticed or out of sight.

It is easily identified by its stand and case which is usually shown to have three curved legs from which it levitates when in use.

Book of the Vishanti

This is a collection of defensive spells, all of which rank among the most powerful white magic spells in

existence.  Doctor Strange doesn’t exactly run around with this book in his pockets.  For one thing, it doesn’t come in a handy-dandy pocket paperback edition (though I’m sure there’s a spell for that).  And secondly it isn’t really a quick reference guide to spells Strange would use on a regular basis.

He tends to use the Book of the Vishanti only when circumstances are particularly dire or he’s in need of a very powerful spell.  Until then, it resides upon a shelf in his library.  It, too, was given to him by The Ancient One who travelled back in time and beat up a griffin to obtain it.  The Ancient One held onto the book until he was sure Strange was worthy and ready to keep it, for although all of the magic contained within its pages is white it is still very dangerous!

As you can see, Doctor Strange has quite the arsenal of tools at his disposal in the fight against evil; each supplementing his natural magical gifts.  We’ll definitely get to see two of these in action in the movie and I’m sure the other two will grace the silver screen in time, as well.