It’s easy to take for granted these days the computing power we have in our pockets at any given time. It’s been said, and I think I believe it, that the average smart phone has more computing power than all the computers used to send Apollo astronauts to the moon and back. That’s an amazing thought…

But we didn’t just end up with smart phones out of the blue. It was a long process from vacuum tube computing machines in the 40s and 50s to where we are today. And, being the nostalgic nerd that I am, I thought it might be fun to relive some of my pages in that book, so to speak.

So without further ado, here are the computers I grew up on.

I’m pretty sure my parents had this one when I was born (1984). My mom probably wrote her masters thesis and her doctoral dissertation on it. It was a total workhorse; I can remember playing games on it until I was in probably 3rd grade, and after we quit using the computer we used the monitor as a second TV. 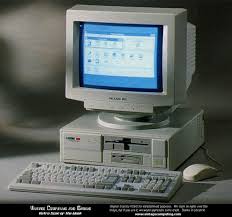 Somewhere along the way, we picked up an IBM 386, and I was first exposed to Microsoft Windows 3.1. Man, that was awesome… That was back when windows were windows, and operating systems knew how to take a beating, you whippersnappers! The 386 was the first machine I ever used for word processing. It was 3rd grade, I believe, and I wrote what I’m sure was a really comprehensive piece on Georgia history. 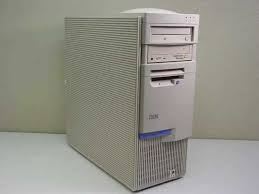 My memory is fuzzy here, but at one point I’m pretty sure we had, and were using, both the 386 and the spanking new IBM with the PENTIUM 2 PROCESSER WITH MMX TECHNOLOGY. What a cool name! Along with the cool name came a lot of new processing power. Like, enough to play a pretty decent flight simulator (at least by 1997 standards). This was also the first computer I ever used to access the internet. 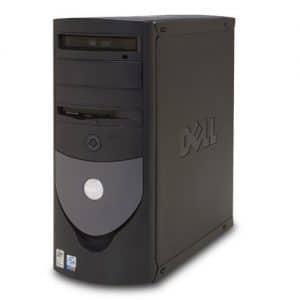 At the height of the “Dude, you’re getting a Dell!” craze, we got ourselves one with a Pentium 4 processor. More than that, it was black. How awesome is that?! This was the first desktop we owned that could really come close to replicating modern video game consoles graphically. It was a great machine. I took it with me when I moved to college. It was also the last desktop I owned. During the summer after my sophomore year of college I took the Mac plunge and got myself a PowerBook G4. If this computer was truly the end of the desktop era for me, then it was a good one to go out on.

It’s easy to forget sometimes that I’m a part of the first generation of kids who truly grew up with personal computers, either at home or in the classroom or both. And it’s probably not possible to quantify how different our childhoods were from the generation before us, or from the current generation who are growing up in a world where they’ve never not had the ability to send someone into space in their pocket. Strange days…

What were some of the computers you grew up with, or that had a big impact on you as a young nerd?