Image’s Loose Ends, written by Jason Latour and illustrated by Chris Brunner is described as a “Southern Crime Romance,” and if that makes you think of Southern Bastards, well, you’re not too far off. Not only was that series co-created by Mr. Latour, but the same elements show up here: there’s the same sense of drawling menace, the same sudden violence hiding under trucker hats, the same guns, drugs, and money. But where Aaron tried to wrestle with the cancers that grow in under the surface of small towns, Latour seems much more preoccupied with a personal story. 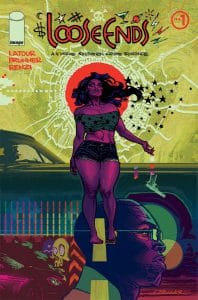 That story is about Sonny Gibson, a skinny, burned-out Iraq War veteran transporting drugs to Florida. Save for an expository flashback, the comic centers around his stop at Bobbi’s Hideaway (a beer-soaked, neon-lit dive bar off I-16) and the drunks and bartenders that call it home.

The story is thin, but we’re given hints of a larger history just underneath the surface. Sonny is laconic, almost monosyllabic, and doesn’t seem interested in sharing any details about his life with the reader, but what little we can uncover reveals a potentially fascinating character: the traditionally flawed noir hero, trying to adhere to his particular code of justice while surrounded by violence. We are given a glimpse into Sonny’s past and perhaps a basic idea of what sins he’s running from. It’s not particularly fresh ground, but Latour treads it capably.

Latour’s writing in Loose Ends is competent. There is a moment of genuine surprise near the end, and it’s executed extremely well, but for the most part, the comic is solid, but largely unremarkable, with dialogue that flows believably and a story that has the potential to be something special.

Much more interesting is the way he builds up the characters around Sonny. There’s Cheri, the cheerful waitress; Kim, who has a past with Sonny; Tucker, the loutish drunk; and Rex, quiet and tightly wound. These four swirl around each other and Sonny, occasionally interacting, until all five intersect in the finale, an extended sequence of spectacular, gut-churning violence. Artist Chris Brunner and colorist Rico Renzi deserve heaps of praise for how well they manage to pull it off; it’s completely free of dialogue, putting all of the focus on the immediate, stunning brutality of it all.

Brunner and Renzi make Loose Ends a book that is never beautiful, but is always striking and often impressive. Sonny spends most of the night at Bobbi’s getting drunk; as he gets more and more impaired, the art seems to slide and smear. When violence erupts, everything goes red and jagged. You can almost feel the dirt and grime on the pool cues at Bobbi’s. And a good eye for detail means that the background gets to carry some of the narrative; from the graffiti on the bathroom to an appearance of the Vortex (a familiar sight to residents of Atlanta), you get the chance to really feel like part of the world.

As a first issue, Loose Ends #1 does its job well. It sets the scene. It establishes the tone. It introduces the key players. And, most importantly, the moment of shock definitely has that “I’ve got to pick up the next issue of this” feel, which, when you think about it, is the only thing that matters. If you can’t get enough of crime comics (and really, who can?), you should probably give Loose Ends #1 a try.

Loose Ends #1, by Jason Latour and Chris Brunner, is on sale January 25th. 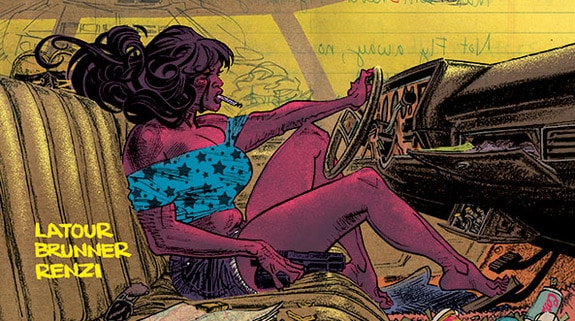 (Disclosure: Image Comics provided Nerds on Earth with a complimentary copy of Loose Ends for preview.)