Read on for a spoiler-free review of Head Lopper, as well as an overview of the series (just in case you’re late to the party). 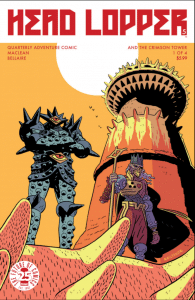 The Head Lopper: Who He Is

His name is Norgal. He lops heads.

He has a beard, a sword, and a witch’s head. The head talks. It’s name is Agatha. It is rarely polite. 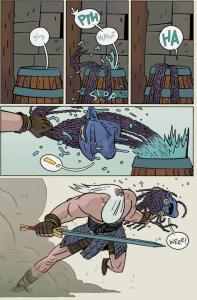 With his huge sword and bare chest, Norgal certainly bears more than a passing resemblance to Robert Jordan’s most famous creation but Head Lopper does a great job carving out a spot for itself in a market otherwise clogged with sub-par Game of Thrones clones.

It’s hard to have a lot of character development when your hero is a monosyllabic pile of muscles and violence, which is where Agatha Blue Witch comes in. Without her sharp tongue and tremendous appetite, Head Lopper would be grim and joyless, just another monster comic.

But MacClean has hit on an effective balance of Norgal’s Eastwood-esque grunting mystique and Agatha’s impudent cackling. Every time Norgal gets too serious, Agatha throws out another insult; every time it seems like she’ll get annoying, Norgal gets in a fight with a giant wolf. 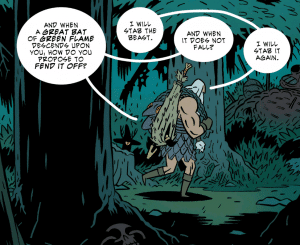 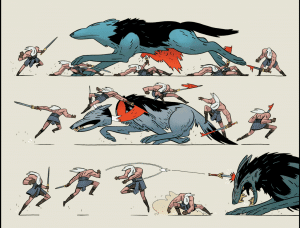 By now, “Mignola” is indisputably its own style, and with popularity inevitably comes poor imitators, who merely duplicate without innovation. Fortunately, MacClean deserves to be recognized for making the Hellboy-inspired Head Lopper completely unique. His lines are clean, and his silhouettes are distinct; at times, Norgal’s face disappears into his beard, leaving him a hulking mass with a blank, white face. It’s the perfect look for a character that’s more about action than talk.

Jordie Bellaire’s colors are bold, and, as usual, she does an excellent job of using distinct palettes to make characters immediately distinguishable. Anyone who’s read Manhattan Projects will be familiar with the tricks she uses to divide the page and set tone; if these new Head Lopper stories are any indication, she’s still at the top of her game.

And That Brings Us To Now

The first four-issue arc managed to weave together a story of monsters, revenge, and palace intrigue into a single compelling story, and based on the first issue of this new arc, (which sees Norgal, Agatha, and a handful of others storming a tower in a kind of Hunger Games-meets-Dungeons & Dragons competition), MacClean is trying to replicate that initial success. It’s hard to know if he’ll pull it off based off of that one issue, but all the building blocks are there. 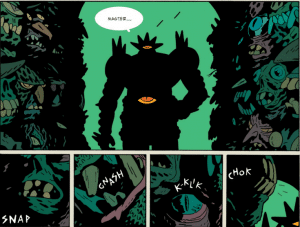 Issue #5 has its share of scrapes, and when the action lets up, it’s only to flesh out the history of the characters. There’s a proud warrior looking to avenge the loss of her people that gets a lot of attention, and it’s a fair bet that she’ll be the focus of much of the growth as the arc continues (recall that Norgal is less of a character than he is a destructive weather system, so there’s not a lot of dynamism there). 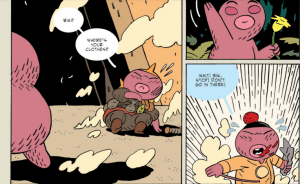 They’re adorable. And there’s a surprising amount of tension involving Twerpal (he’s the one with hat. Not the naked one). I’ll say this for MacClean–it isn’t easy to make the most interesting character in your barbarian fantasy a two-foot-tall goblin without a nose.

Head Lopper is not an introspective comic. It asks few questions and makes few demands of the reader. In fact, there’s only one important question that needs to be answered here: Is Head Lopper #5 worth your money? And the answer to that question is “Sure,” especially if there’s still a Skull Kickers-shaped hole in your pull list. (You can get the first trade here to tide you over.)

Head Lopper will scratch any kind of sword & sorcery itch you might happen to have…provided you’re willing to wait three months between issues.