The party had a huge decision to make concerning how to proceed, so Troy graciously gave them a week to work it out amongst themselves.  Discover their next steps in episode 94 – Sneaky Blinders.  Will it be their last?!

Having vanquished the guardians at the gate, the party faces crucial decisions on how they can possibly proceed with hundreds upon hundreds of giants between them and the cathedral. 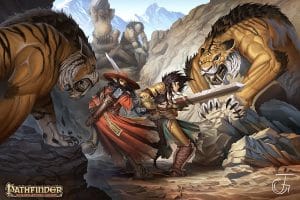 A Shopping List for a Brand New Dungeon Master