Today I want to pitch to you an unconventional Marvel miniseries that centers on everyone’s favorite genetic anomalies: mutants.  Most of you reading this post will be familiar with many of the faces that comprise this miniseries’ cast – even if you’ve never read a comic book in your life.

You’ve got your Wolverine, your Professor Xavier, your Beast, your Colossus (all of whom have been featured in multiple movies – and a couple even in multiple franchises – over the last dozen years or so). 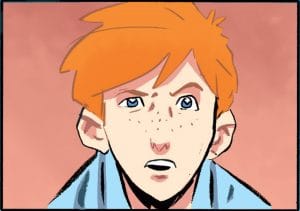 They are your A-listers.  They’ve all got powers we might even envy.

And then there’s Bailey.

But you should come to know Bailey’s story, because he’s The Worst X-Man Ever.

The Worst X-Man Ever:  It Kinda Stinks To Be Bailey

Bailey is below average in every way possible.  When we first meet him, he’s Facebook stalking a bunch of girls in his high school – scopin’ and hopin’ that he’s got a chance with one of them.  His friend explains that all of the candidates are way out of his league except one:  Chandra Banks who “has not one noteworthy quality to her.”

Bailey is trying so hard to fit in and it just isn’t happening.  And to make things go from bad to worse…his parents drop the “You’re a mutant” bomb on him.

Only Bailey thinks that’s the greatest thing ever!  He thinks mutants are “awesome” and “have super-powers and run around fighting monsters and brooding and making out with each other and dressing weirdly badass.”

This is his big chance to be somebody.

Only thing is…his power is, by far, the worst super-power ever.

I won’t spoil it here, but trust me – even the likes of Maggot and Skin have powers that shine like the glorious noonday sun compared to Bailey’s! 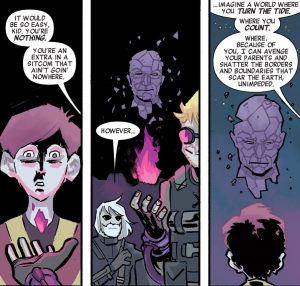 So he goes from a nobody in society at large to a nobody in the ostracized mutant society.  Not exactly an upgrade.  He finds a place on a team, but basically as the post-battle janitor.

After a time, Mystique and Magneto get in Bailey’s ear and try to convince him to use his powers to do something that “counts.”  And that’s all Bailey’s ever really wanted:  To be noticed, needed, and significant.  Will he take the villains up on their offer?

The Worst X-Man Ever:  There’s So Much Right!

This five issue miniseries does so much so well!

Worst X-Man Ever: The Secret Ingredient

Here’s part of the secret to Max Bemis’s success with The Worst X-Man Ever:  It exists outside of conventional continuity.  He could do what he wanted and not have to worry about what anybody else would do with the developed narrative.  He was given a sandbox and he played really, really well in it. 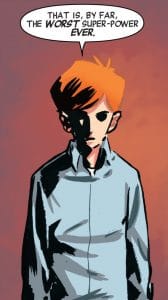 Its not just the concept that makes The Worst X-Man Ever the successful experiment I think it is, its the execution.  The concept by itself is funny, sure, but to take its relative simplicity, run with it for 5 full issues, and not only keep from running it into the ground but also develop it into something ultimately meaningful and even emotional is downright magic.

You owe it to yourself to read Worst X-Man Ever.  It revitalizes the oldest theme in X-Men comics (being an outcast or “freak”) by turning it up to 11.  Just when Bailey thinks he’s finally something or someone exceptional (BTW: That’s the codename he picks for him – X-ceptional), he finds out how very much not exceptional he is.

But here’s the thing:  Worst X-Man Ever is still the story of a hero.  There’s much to appreciate about the message Bemis delivers in the final few pages of this excellent miniseries.

It is available collected in TPB (trade paperback) form from Comixology for $8.99, from Amazon for $11.32, or for FREE (assuming you’ve got a Marvel Unlimited subscription, that is, because its all in there).