Our review of Crown of Fangs, the new set of miniatures for your RPG

Imagine if everything in your life suddenly got 8% better. Your jokes started getting 8% more laughs. You got 8% more epic drops in your favorite video games. Your intelligence is up by 8% and you are falling for 8% less fake news. Your food tastes 8% better, and here’s the kicker, you can eat 8% more of it without gaining weight.

8% doesn’t sound like much, but across the board, it really, really adds up. 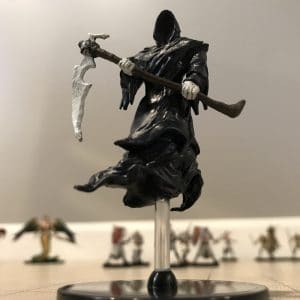 Astute readers might recall that I used the same lede with our review of Curse of the Crimson Throne, the latest hardcover adventure for the Pathfinder RPG. I went back to that same tired well in order to fully illustrate that the more I review Pathfinder products, the more I’m realizing that their already strong products just keep getting stronger.

I feel like the Pathfinder Battles line of miniatures gets incrementally better release after release. I can’t scientifically confirm it’s a 8% gain, but it’s clear that the quality gains are adding up. Nowhere is this more true than in Crown of Fangs. 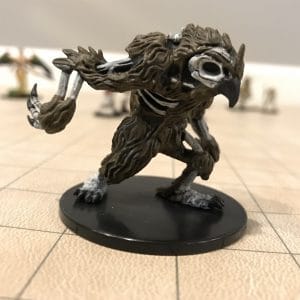 Crown of Fangs is the 11th set of prepainted Pathfinder Battles miniatures for you to use in your Pathfinder or D&D games. Heck, gaming utility aside, you can simply set them on your desk because we could all use a few more pieces of flair to brighten up our dreary days.

Each Pathfinder Battles set is produced by Wizkids, a gaming company that is also known for their popular Heroclix and Dice Masters. They are sold in blind boosters, meaning you don’t know what figure you’ll get. You only know that each booster includes one large figure and three medium sized, giving you four miniatures for around a $16 investment.

Review of Crown of Fang Miniatures 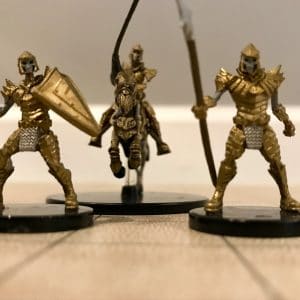 They are beautiful figures. Sure, you might not think of an undead owlbear or skeletal knight as beautiful, but it’s hard not to appreciate the craftsmanship. In looking closely at each figure, I found that I was impressed with the detail in each and every one.

On the figures with armor, individual chain links could often be seen. Shields have a level of embossment to them. If the character has a quiver, individual arrows were differentiated. And there are often extra touches of interest on characters, such as skulls lashed onto the bad guys or extra daggers and blades attached to belts. Kudos to Wizkids, as there is an impressive level of detail present, particularly for a repainted figure that is so inexpensive. 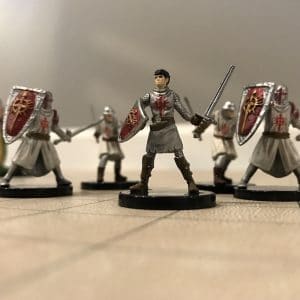 It’s a thoughtful mix of figures. I was really pleased when I pulled out a simple knight out of a booster, then pulled a similarly posed knight from the 3rd booster. Out of the brick (a collection of 8 boosters), I pulled 5 such knights.

Whereas this might initially be seen as a bummer to have 5 seemingly common figures, its miniatures like this that are used so often in games. Whether it’s a city guard, a collection of do-gooder NPCs, or a single knight pulled out to represent a player character, it’s clear that Paizo and Wizkids were thoughtful in assuring that common figures carried broad utility.

On the other hand, the rarer figures in the set serve as more one-and-done type figures. For example, I only pulled one figure for Death, but that’s actually helpful, as lord knows I don’t need multiple Grim Reapers around to raise my anxiety level. 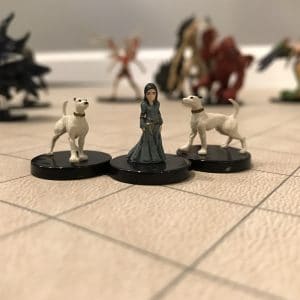 What’s more, there were some moments of whimsy and delight among the mix as well. Sure, the giant spider and orc bad guy will get lots of use, but I love that they included a little dog in the set.

I would have used more shading. This is a technique where figures are either dipped or brushed with a thin wash of dark inky-like paint. The wash settles into the folds and crevices, giving the figure an appearance of more depth.

It seems to my old eyes that previous Pathfinder Battles sets used…well, let’s say about 8% more shading. This isn’t a huge drag, as many of the figures still felt shaded quite well, giving them nice depth and contrast. But others such as the Cabbagehead figure (who is a gnarly looking dude to begin with) didn’t seem to have a drop of shading and seemed to be a bit poorer for it. 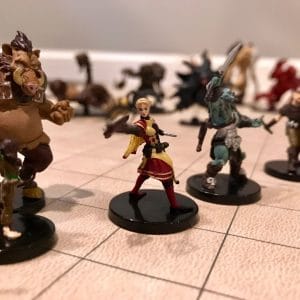 The faces are excellently painted and detailed. With a figure that is barely an inch tall, it’s understandable that it would be difficult to get a super fine detail of paint during mass production. That’s why so many miniatures of this type have little globs of black where the eyeballs should be.

Crown of Fangs got faces right! Not only are the eyes painted clearly (with visible pupils and irises), but many figures had distinct eyebrows and other features. I know real people who would drop serious cash to get their eyebrows shaped like Wizkids was able to pull off on a 1 inch miniature.

The quality really adds up. While the entire Pathfinder Battles line of RPG miniatures has been a winner, it’s been the last few sets (Rusty Dragon Inn, Deadly Foes, and now Crown of Fangs) where the continued increase in quality and artistry has been especially noticeable.

The Crown of Fangs set has a logical and functional mix in terms of figure types. The figures are dynamically sculpted and beautifully painted. And they are darned cool.

I’m thinking the good folks at Wizkids and Paizo deserve an 8% raise.

[Disclosure: Wizkids provided Nerds on Earth with an unopened brick of miniatures for review.]

A Video Introduction to X-Men Blue #1