I’m not a wine drinker, so I don’t know the differences in tannins, acidity, glycerin and alcohol levels between red and white wines. In fact, I had to look up tannins on Wikipedia just to write that opening sentence. But I do know a good board game when I play one. 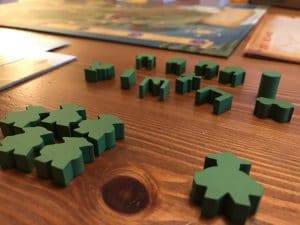 Viticulture is a board game about making wine, which isn’t a theme you’d think would thrill you until you play it and realize how enjoyable it is. Players take the roles of people in rustic, pre-modern Tuscany who are vineyard owners.

Every season is different for a vineyard and the game reflects that. For example, summer and winter bring different tasks for the workers in charge of the plot of land. And there is competition over those tasks, with the first worker to get to the job taking an advantage over subsequent workers. This placement of workers is the key strategic element in gameplay.

Additionally, people visit the vineyards (this is one of the card elements of the game) and players expand their vineyards by building structures, planting more vines, or fulfilling wine orders. 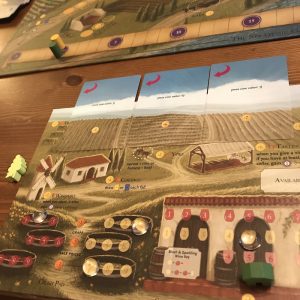 Viticulture sets up in about a minute. This is such a breath of fresh air compared to a lot of board games where it feels laborious to even get it to the table. My wife is my primary gaming partner and she will tap out if she knows a game takes a long time to set up.

Viticulture includes a one page quick rules guide. The first paragraph of that is a few simple sentences for setup. That’s it. The game lets you get right to playing.

The components are remarkable. Really, they are a delight. Owning this game feels like you are owning something nice. First, the wooden meeples are cut into shapes workers, buildings, and roosters and come in vibrant, vivid colors.

Second, other pieces like the player boards are think and sturdy. There is no floppy cardboard with this game. Even the game box is sturdy! 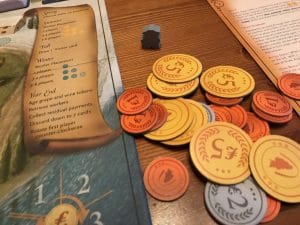 Finally, the little bells and whistle piece are great too. There is a bundle of grapes that serves as a player token and little glass beads help track progress.

The theme is surprisingly captivating. I’m a low-brow ‘Hulk smash’ sort of guy, but I was loving that playing the game felt like I was transported to the hills of Tuscany.

From the artwork, to the game pieces, to the way the game has workers perform tasks throughout the different seasons, the theme of making wine felt excellently integrated into the gameplay and not just tacked on. 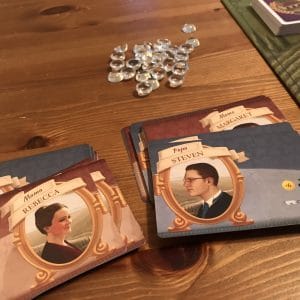 Moving markers around is fun. It might be the simple things like the point tracker that runs around the board, but moving pieces around is one of the reasons we play board games. The core of this game is a worker placement mechanic that is reminiscent of games like Stone Age and brings a lot of enjoyment to gameplay.

I also really enjoyed the individual player boards and the beads used to track usage. Viticulture is undoubtedly a joy to play. Unfortunately, I did at one point bump my player board, sending my markers flying. That nearly drove me to drinking.

I really enjoyed Viticulture. It’s a board game that strikes a nice balance between offering a depth of strategy and challenge without being so darned overly-complicated that you never quite figure it out. Viticulture is just right in this regard.

What you ultimately want from a board game is for it to be fun and Viticulture absolutely succeeds. It is also beautifully made with great components and a well thought out theme. I guess you could say it was crafted with care. Sort of like a fine wine.

Our review of Crown of Fangs, the new set of miniatures for your RPG