Charging fearlessly on horseback, Sulaiman ibn Dawud raised his magical ring defiantly, clearly meaning it as a show of challenge to his foe. That his foe was the demon Ornias was of no concern to Sulaiman. Indeed, he intended to use the demon for his bidding. He had a job to do and it would be done by any means necessary. And he’d start with Ornias, then march his way through the demons Obyzouth, Ephippas, Abezethibou, Asmodeus, and even Beelzebul, the prince of demons himself. 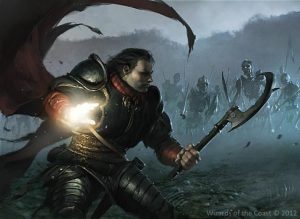 Unless you speak Arabic or are familiar with the Koran, you might not recognize that Sulaiman Ibn Dawud is translated to Solomon, son of David in the Western world. And that magical ring? Well, that’s the Seal of Solomon, a signet ring attributed to King Solomon first in medieval Jewish tradition, then later in Islamic and Western occultism. The Seal of Solomon was depicted as a hexagram shape; also known as the Star of David.

The story goes that the ring gave Solomon the power to command demons and genies (jinn). Associated with the proverbial wisdom of Solomon, this ring came to be seen as a powerful symbol in medieval and Renaissance-era magic, occultism, and alchemy.

Still, this all sounds like a tall tale. Well, it came from The Testament of Solomon, an Old Testament pseudepigraphical work attributed to King Solomon. It was written in Greek some one thousand years after King Solomon’s death and the building of the First Temple in Jerusalem around 950 BC. In fact, The Testament of Solomon describes how he was enabled to build that temple by commanding demons by means of the Seal of Solomon, originally entrusted to him by the archangel Michael.

King Solomon, of course, is one of the most important figures in Jewish, Islamic, and Christian history. Large portions of the Jewish scriptures, Biblical Old Testament, and the Koran tell of this king, who succeeded his father King David and constructed the Jerusalem Temple.

Yet very few have heard the tales of Solomon as a magician, a character capable of subduing even the devil himself. Sure, The Testament of Solomon is pseudepigraphical (historical texts that are written about figures of the past, so therefore aren’t included in the scriptural canon) but it’s a darned entertaining read.

Not only does The Testament of Solomon contain the story of Solomon using his magical Seal of Solomon to subdue Beelzebul in order to command demons to build the temple, it concludes with a tale of Solomon falling in love with the woman from the Biblical Song of Solomon and agreeing to worship the detestable god Moloch in exchange for sex. 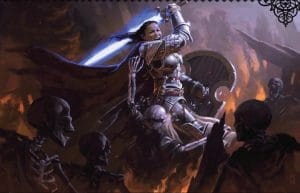 Wowzers. But The Testament of Solomon also contains many Christian themes. The most explicit and notable was during King Solomon’s encounter with the demon Ephippas. While working on the temple, Solomon asked Ephippas what could fully vanquish him. The demon replied that the only thing that can truly take away his powers and defeat him is a man that will be born of a virgin and then be crucified on a cross by the Jews.

Let’s put a pin in the fantastical tales of Solomon and conclude by discussing two things.

First, Solomon is way cooler than we’ve been taught. Why does no one talk about the fact that he carried around magical items like a wizard?!? Indeed, the Key of Solomon and the Magical Treatise of Solomon are grimoires (textbook of magic) purporting to contain Solomon’s instructions on various magical techniques and items to summon and control different spirits, astrological beliefs, select charms, different means of divination, and the magical uses of herbs. 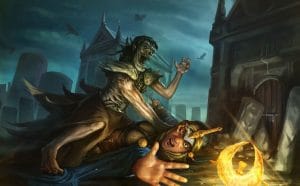 That’s some serious D&D-type stuff. Indeed, the spell Thaumaturgy has a rich history in RPGs, including D&D 5e, as a cantrip. The word “thaumaturgy” is Greek for “miracle worker,” and originated around Christian saints such as Solomon, specifically those for whom miracles were not a rare thing, but a matter of course.

So the next time your cleric uses thaumaturgy to make your voice boom, cause flames to flicker, make harmless tremors in the ground, or generate an instantaneous sound, please spare a thought for King Solomon, the original warlock.

Second, we need to talk about alignment for a moment. Solomon was the Son of David, a man that the Bible says was after God’s own heart. So Sulaiman ibn Dawud certainly had the pedigree for a lawful good alignment.

Yet you can’t dance with demons and not pay a price. Sadly, in addition to being known as a wise temple builder, Solomon was later known as a sinful man, one that turned his back on his deity, craving sex, power, and decadence instead. In other words, did Solomon really subdue the demons or they ultimately subdue him?

The reminds me of the current storyline in the Glass Cannon Podcast where five guys are roleplaying a tale that in part features demon’s blood. One neutrally-aligned character uses the demon’s blood to heal her wounds, claiming that her heroic ends justify her demonic means. Ultimately, she tempts the party’s reluctant paladin into partaking of the demon’s blood as well.

But as Solomon has taught us, there are consequences to dancing with demons. The paladin loses his connection with his deity and is stripped of his powers, while the girl suddenly finds herself with an evil alignment that threatens to tear the heroes apart. If only the thaumaturgy spell could heal intra-party wounds.

In the Western world, we no longer live in an age of marvels, and we are much the poorer for it. Stories like those of Sulaiman ibn Dawud who wields a magic ring to subdue demons is pretty entertaining fare.

But the biggest loss is we brush right past what they might teach us.