I don’t know if you’ve heard, but we here at Nerds On Earth love podcasts. No matter what you want—fascinating interviews (“Fresh Air”), off-the-wall advice (“My Brother, My Brother, And Me), musical analysis (“Star Wars Oxygen”), or narrative history (“The Secret History of Hollywood”)—the odds are that there’s a podcast for you out there.

One of my personal favorites is “Stuff You Should 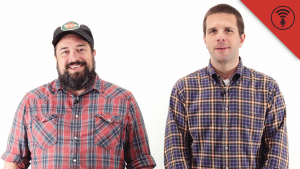 Know.” Hosted by Josh Clark and Charles “Chuckers” Bryant, SYSK has been on the air since 2008 courtesy of HowStuffWorks.com. These guys know their stuff; each topic is meticulously researched, and even more info is posted on their website.

The show is just fun, too. Josh and Chuck are best friends in real life, and their camaraderie adds real charm to the fascinating topic of each episode.

But SYSK has been around for almost ten years, so if you’re a little overwhelmed by the sheer number of episodes, look no further—here are seven great episodes to get you started.

When a group of young black men in California decided to protect themselves and other African Americans from police brutality in the late 1960s, they created the Black Panther Party For Self-Defense. The Panthers are one of the most notorious and misunderstood civil rights groups to come from a very turbulent decade in American history.

Until very recently, the Baby Boomers were the largest age group in America. Why are there so many of them? How have they changed American society? What does the future look like for Americans born between 1946 and 1964? How do they compare to Gen X and the Millennials.

As home to the moai (big stone heads) and a unique ecosystem that helped Darwin formulate his theory of evolution, Easter Island exudes an air of romantic mystery. Humans have inhabited it for centuries, but the future (and past) of life on Easter Island is far from set in stone.

Until just a few decades ago, freak shows were a common part of many carnivals and circuses. While fascinating, the practice did little to encourage understanding between the viewing public and the “freaks” they paid to see. These performers often became very rich from their work, but at what cost?

The Antikythera Mechanism was discovered in 1900 off the coast of Greece, and it has been a source of constant academic debate and wild conspiracy theories ever since.

Is it the world’s first computer, a conduit to the gods, or an astrological device? The answer is as complicated as the Mechanism itself.

The Voynich Manuscript, a medieval illuminated manuscript written in a completely indecipherable (so far) language, is a true unsolved mystery. Gorgeous illustrations of fantastical creatures and plants only add to the enigma. The book is recorded to have existed in the 1600s, but its actual age, origin, and purpose are unknown.

Opera singers and vocalists in heavy metal bands aren’t the only people who have to take care of their voices. Vocal fry is real, and it sparks a surprising amount of (often gender-based and/or age-based) controversy. So does upspeak, or pitching your voice so that every sentence ends with what sounds like a question mark.

Josh and Chuck put a couple of episodes out each week, so there are bound to be at least a few that grab your attention. Dive in and thank us later!