As both a DM/GM and Type-A personality, maps matter a lot to me in my campaigns. I’ve run the gamut of methods of production:

And to be honest…I haven’t fallen in love with any of them. I mean, purchasing the maps from the professionals (like Mike Schley, for example) is great, but they tend to be adventure specific. And while I realize you can take any pre-designed map and make it work for any story, I’m wrestling with one simple question:

If I design my own campaign from the ground up and everything within it is mine (the world, the mythos, the conflicts, etc), why not the maps, too?

Hand drawn just isn’t a strength of mine and the current digital options more restricting than I’d like. So when Tobias Drewry (CEO of Mesa Mundi, Inc and lead developer of World Engine) and Steven Wolpern (co-founder of Digital Agility Media, the marketing team supporting Mesa Mundi) reached out to talk to me about World Engine, a new RPG map builder optimized for both virtual tabletops and printed maps, I leaped at the opportunity to see what all the hubbub was about.

The first thing I asked the developers was, “What do you guys consider the ‘tent poles’ of your product?  What’s going to differentiate World Engine from the rest of the market?”

Here’s what they had to say:

Not like this, you haven’t. Even the “stuff we’ve seen before” is turned up to 11. Tons of manipulation options when it comes to textures and tiles unlike anything I’ve experienced so far, and they hinted at functionality I’m pretty sure isn’t available on any other map builder out there right now. We’re talking advanced geometry and vector tools that are on the video game development levels, folks.

And the freehand option is fantastic! AND you can seamlessly couple what you draw freehand with the tiles and textures. Take the picture below, for example. The flooring was added first and the wall freehanded on top of it (or possibly on separate layers), but you can just as easily draw your walls and paint a tile or texture within the boundaries with a single click (instead of a hundred or having to click and drag).

Oh, and by the way...you’re given a space that is 500,000 squares x 500,000 squares to create in.  Tobias mentioned a world map they’ve got that you can look at from a bird’s eye view and then zoom in to individual cities and homes. That is bonkers.

2.  Everything is optimized for touch or stylus – so users can actually draw and manipulate maps on a tablet.

ON A TABLET, people. That was one of the biggest selling points for me, personally. I can create on the go, and do so with my finger or a stylus instead of a mouse. To my knowledge, no one else is really offering this right now; at least not anyone with the specific aim of fantasy map creation.

3.  It’s super easy to use, but will launch with many of the same advanced drawing features found in programs like GIMP, Photoshop and Illustrator.

So the learning curve will be minuscule for folks already familiar with those programs. Heck, I’ve only had practice with the likes of MS Paint and Pixelmator and I picked it up immediately. And the tools available will expand over time (although some will remain locked for subscribers beneath a certain tiers).

4.  Premier fantasy artists and cartographers are signing up to provide art content. 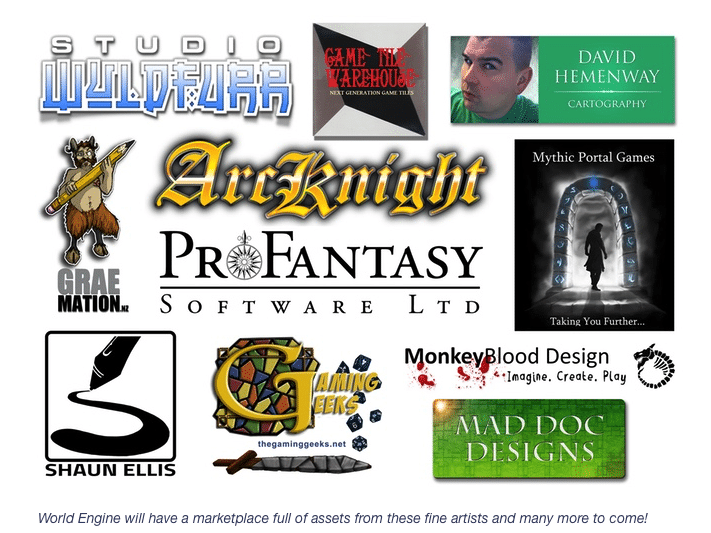 5.  The app will be available with a friendly subscription model that ensures users get to keep and use their content.

This entails a couple of things worth unpacking briefly:

6.  World Engine is doing everything they can to make your maps available for commercial use.

While this will not appeal or apply to everyone, it will be a BIG deal to some. A tagging system will make it immediately clear which assets are usable for commercial production as well as a mechanism to request commercial usage rights from the artists on an individual basis.

There will be only two costs with World Engine:

The developers have assured me that there will be absolutely no hidden costs.  Tobias put it this way:

We know subscriptions are a bit off-putting, but there will be no up-charges, no add-ons, and no hidden costs.

Taking some direction for their model from programs like Apple Music, there will be three levels of subscription with options to purchase additional content (tiles, textures, etc) in packs or individually at the vendor’s discretion. This should be nothing new to anyone familiar with iTunes, for example, wherein some artists permit the purchase of individual tracks from an album whereas others disable individual purchases and require you to buy the whole thing.

And the bang for your buck will improve over time as the team continues to develop the tool. Quoting Tobias once again,

We’re not going to just build it and leave it. We’re going to build it, and continue building it, and improving upon what we’ve built as we go. And the community will have a tremendous amount of influence through forums and other forms of communication including direct contact with us.  We want to make sure we’re building something that meets the needs of the community we’re serving every step of the way. That approach is what generated a lot of the strength of D20Pro – it came from the community.

The last question I asked of the developers was 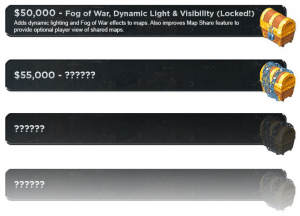 whether or not they had additions or improvements mapped out beyond what is shown listed at the $50,000 mark as the locked chests depicting the Stretch Goals continued beyond it with a series of potentially promising question marks.

Tobias explained that they’ve got a fairly extensive and exhaustive roadmap on their end that, if he had to guess, “probably reaches to the $175,000 region or so.”

The Kickstarter page also shows that they’ve already received five backers at the highest ($1,500) level, and when I made a comment about that being a strong sign of interest, Tobias took it one step further:

Yeah, I can’t tell you who exactly those backers are, but I can say that many of them are professionals; people that know what’s out there and what they want and see it in World Engine.

Arcknight, one of premier fantasy artists and cartographers mentioned earlier, said, “This is going to revolutionize map making!”

I don’t know what further advertisement you need to jump in on the Kickstarter or subscribe when the time comes than that, honestly.

You can back the Kickstarter here – but hurry! There’s only five days left to help them reach their Stretch Goals and earn yourself discounted rates at the subscription level of your choice.

You’re also invited to try World Engine yourself for FREE here in its pre-alpha stage of development.  That means that a lot of the utility and function is unavailable, but you can still create some pretty amazing maps right now…Which means it will only get better from here.

Oh, and if you find yourself at Gen Con this year, be sure to look up the Mesa Mundi team who will be showing off both D20Pro and World Engine as well as hosting their annual dungeon crawl sessions.  Tell them Nerds on Earth sent you.  It won’t get you anything, but we’ll appreciate the connection anyway!

Behold! A Review of Xanathar’s Guide to Everything,…