Steven Spielberg’s Indiana Jones and the Last Crusade is that franchise’s Return of the Jedi. Our older and wiser heroes band together for one last adventure; an old enemy rises to stop them; the fate of the world hangs in the balance—sound familiar?

In addition, both films aim for a lighter tone than their predecessors and add fascinating new allies and villains to their proven recipes. The Last Crusade is an absolute joy of a movie, one that has more connections and secrets to the other Indy films than most fans remember or notice.

7. Indiana Jones’ age. Like Raiders and Temple of Doom, the movie opens with a self-contained adventure to get our blood pumping and to reacquaint the audience with Dr. Jones. The Last Crusade opens in 1912 with the teenage Indy (or Junior, as his father prefers) rescuing the Cross of Coronado from grave robbers in Utah.

Jones’ age was undetermined when the film came out, but we could guesstimate that by the time the story proper kicks off in 1938 he was about 40. The Young Indiana Jones Chronicle would confirm for fans that Indiana Jones was born in 1899, which makes him 39 during his quest for the Holy Grail.

6. Indy’s famous traits. Having nabbed the Cross of Coronado, Indy jumps onto a travelling circus train with the grave robbers in hot pursuit. Spielberg uses this excellent setpiece to establish several of the characteristics we know and love about the globe-trotting archaeologist. 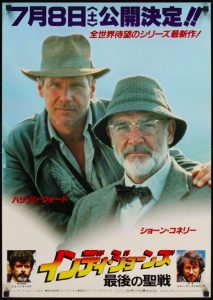 5. An Ark of the Covenant cameo. After solving the riddle that hides the entrance to Sir Richard’s tomb, Dr. Jones and Dr. Elsa Schneider descend into the catacombs of Venice. The ancient crypts are full of rats, crude oil, and some unexpected graffiti: the Ark of the Covenant!

Indy identifies the beautiful and lethal artifact, but Elsa is skeptical. As he responds that he’s “pretty sure” of what it is, John Williams’ ominous theme for the Ark from Raiders plays briefly in the background, a musical confirmation of Jones’ previous adventure. Spielberg and Williams are masters at dropping references to other films they love (or made), but this is a particularly delightful easter egg for Indy fans. (More on the music of John Williams).

4. The location of the Holy Grail. Dr. Jones’ decades of research reveal that the Cup of Christ is hidden in the Canyon of the Crescent Moon, deep in the deserts of the Republic of Hatay. Hatay was a semi-independent province of Syria in the 1930s, a tiny state that was caught up in the territorial squabbling between France, its colony of Syria, and Turkey in the interwar decades.

Its capital is indeed Alexandretta, though the Greco-Roman name has been supplanted by İskenderun (both names are used in the film). In reality İskenderun is a beautiful town on the southern coast of Turkey, not a dusty backwater full of Nazi agents—but it definitely has connections to the Crusades.

3. Henry and Marcus’ secret handshake. The inimitable Dr. Henry Jones finds himself held captive by the Nazis in a Mark VII tank as they make their way to the Canyon of the Crescent Moon. He’s delighted to find Marcus Brody in the tank with him, so much so that he breaks into a chant that sounds like a secret society or fraternity greeting, complete with secret handshake.

Henry says, “Genius of the Restoration…” and Marcus responds with, “…aid in our resuscitation!” This brief, throwaway sequence is a tempting glimpse into the history of these characters. How far back does Marcus and Henry’s friendship go? To which secret society do they belong?

This metropolis was once the teeming capital of the Nabataean culture and was a stop along the trade routes to China and India. Abandoned in the Dark Ages, Petra was lost to Europeans among the sand and heat of the Jordanian deserts for close to two thousand years until its rediscovery in 1812.

When The Last Crusade debuted in pre-internet 1989, many filmgoers had never even heard of or seen Petra. When Indy fans ask, “Is that a real place?” (even today!), it just adds to the mystery and adventure embedded in the DNA of the film.

1. The Word of God. The second trial Indy faces in the Grail Temple is named “The Word of God” and requires the quester to spell the name of God by stepping on the correct stones. The correct name is Jehovah (but in Latin, Jehovah starts with an i!).

This name is not found in the Bible or anywhere in ancient Christian or Hebrew texts. It’s a weird hybrid of Latin letters with Hebrew vowels, a medieval bastardization of the Hebrew YHWH. It does not appear in any texts until the High Middle Ages. Etymologic debates aside, the word fits the inner logic of The Last Crusade perfectly: medieval European knights spoke Latin, and a religious word trial created by one of these knights would naturally use a term like Jehovah.

Fans and critics do not always take The Last Crusade seriously (in another parallel to Jedi, some consider it a lightweight compared its elder siblings—in this case, Raiders of the Lost Ark). This does no justice to a film that does an excellent job in a difficult task: humanizing an archetype. Indiana Jones is James Bond in leather, Han Solo but more likeable, a teacher who makes history fun. The Last Crusade shows us Indy and Henry Jones, Jr., and makes the dichotomy a hell of a fun ride.

Fortune and Glory: A Case for the Archeology of Indiana Jones

32 Nerdy Things For My Son on My 32nd Birthday

“Fortune & Glory, Kid”: The Making Indiana Jones and the…

Anything Goes: The Making of Indiana Jones and the Temple of…