Everyone knows the water levels in any Super Mario games are the worst.  Let’s hope this dive to the submerged temple subverts that trend and makes swimming great again.  Many of the group are without their trusty gear…will an aquatic encounter prove fatal?  Find out today in Episode 116 – Waterhouse-Five.

The heroes must travel underwater in hopes of finding the remnants of an ancient submerged temple! 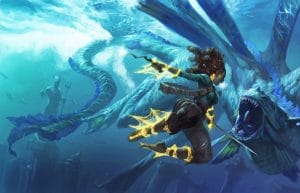 The Drift Episode 9: An Interview with Owen Stephens