An Introduction to Starfinder via the Iron Gods Adventure Path

We all wish we could play roleplaying games as our full time day jobs, but daddy gots to pay da bills. So with time being precious, we might not be able to pull together a weekly gaming group for Starfinder.

But what if your Pathfinder group can taste a little of that delicious science fiction peanut butter in your fantasy chocolate? But a better question is, what if my metaphors would improve?

The Iron Gods Adventure Path introduced science fiction elements into Golarion, the fantasy setting of the Pathfinder RPG. It’s an excellent AP and might scratch your sci-fi itch within the world of Pathfinder.

It also points to the greater potential of Starfinder.

The Iron Gods Adventure Path is set in Numeria, a fairly remote corner of Golarion, the world of the Pathfinder RPG. Thousands of years ago, the sky of Numeria had an event called the “Rain of Stars.” This event was actually fragments of a starships that crashed and scattered the landscape with technological fragments.

As the ages passed, those sites were feared by barbaric tribes as well as coveted by sinister spellcasters of the Technic League. Yet the adventure beings when once of those pieces of technology “awakens”, which calls heroes into action.

The first volume is Fires of Creation. It is set in the small town of Torch and features a dungeon crawl that is actually a “starship crawl” as the dungeon is the ruins of the ancient starship. Paizo did a wonderful job (as usual) creating an engaging adventure to set things into motion.

After Torch, the heroes follow clues to a sprawling junkyard known as Scrapwall, where bands of desperate and violent bandits vie for control over the technological ruins.

At this point I don’t want to spoil it as much as I want to talk about about how the Iron Gods AP gives a teaser for Starfinder. 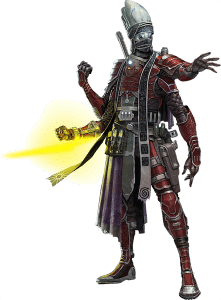 First, there are plenty of winks and nods to Starfinder present in Iron Gods. The obvious first nod are the four armed creatures in the first volume. Although they are evolved in Starfinder and turned into a playable race, the genesis of them is clearly in the Iron Gods AP. Further, the writers did a clever job in how they were able to “bring them to life” in the AP. If you want a teaser for the potential of races in Starfinder, then take a peek at Iron Gods.

Second, Starfinder creates the opportunity for a million locations like Torch and Scrapwall. Paizo does an excellent job of creating vivid and evocative settings through the use of tiny little villages and settlements. Torch and Scrapwall are two good examples of that.

But Starfinder has the potential for an unlimited number of planets with an amazing variety of climates. And each of these planets could be populated with strange and exotic races. The Iron Gods AP gave us a teaser of this, but Starfinder can give us thousands of Mos Eisley Cantina-like locales filled to the brim with adventure hooks and story potential.

The Iron Gods setting gave us a peek at Scrapwall, which has a Jakku-like vibe. There can literally be millions of these little towns in Starfinder, so the evocative nature is super exciting. 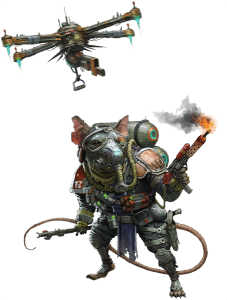 Third, the future sci-fi space tech of the Iron Gods AP merely scratches the surface of what is possible in Starfinder. ’nuff said.

So the Iron Gods AP is a nice little precursor to Stafinder. But it’s a great adventure path on its own terms. It is obviously standing on the shoulders of Gary Gygax’s classic adventure Expedition to the Barrier Peaks that first brought fantasy and science fiction together like peanut butter and chocolate.

It also has elements of other classics like Keep on the Borderlands,in that it has a home base from which the adventures keep journeying back and forth for an extended dungeon crawl. These are tabletop RPG pleasure points.

So don’t overlook Iron Gods. You might not be ready to fully up up fantasy to a full science fiction adventure, but it doesn’t mean you can’t at least dabble.

A Video Introduction to Robotech #1