Review of the Brand New Board Game Wartime: The Battle of Valyance Vale

Most of us would say that we enjoy the storytelling and roleplaying aspects of fantasy properties like D&D. But, let’s be honest, sometimes we just want to hop into an encounter and roll initiative.

Wartime: The Battle of Valyance Vale captures the spirit of rolling initiative in a board game. It is also a board game that oozes potential, so let’s lift the lid and find out what’s in the box.

Review of Wartime: The Battle of Valyance Vale

I was intrigued from the very moment I unpacked the components of Wartime. You see, there are no turns in the game. The flow of the game is instead moderated by the use of sand timers. 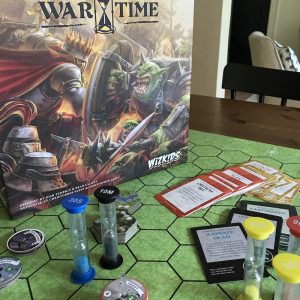 There are two factions in the game:

The game includes a gigantic hex board on which cardboard tiles can be placed to create terrain barriers. This allows flexibility and the creation of unique scenarios like a playing field with mountain barriers or thickets. (It’s not wholly unlike Memoir ’44 in this regard.)

Scenarios also allows for the placement of different Valance Vale and Firebrand units, giving factions a different starting point, setting the stage for the skirmish. Wartime uses a clever and simple solution for creating units. Each unit has a hit point value. You simply count out that many units and place them on the included clear plastic standees.

For example, a Wolf Rider has 4 hit points. Placing a “stack” of 4 Wolf Rider tokens represents a Wolf Rider unit. If another unit does, let’s say, two points of damage to the Wolf Rider, you’d simply remove two tokens off the stack to account for the damage. It works excellently. 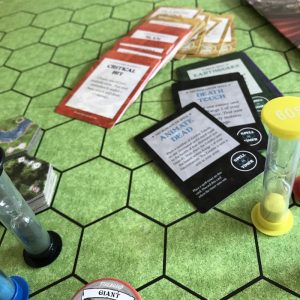 Speaking of working excellently, the sand timer mechanic is straight fire. Each unit has a sand timer in an increment of 30, 60, or 90 seconds. Let’s say you want to move your orc two hex spaces. You’d declare your move, slide your unit to the new space, then flip over your sand timer. That unit must hold tight until the last grain of sand falls through.

But while you wait, you best be looking toward your other units. Maybe you are in position to attack with one of those. Declare it. Your opponent will remove the amount of tokens equal to the damage, then you’ll flip that sand timer over, because that unit can’t attack again until the sand runs through the timer.

Speaking of your opponent, their hands are flailing around like Animal playing the drums, because they are working their sand timers simultaneous to yours. The entire experience creates a near perfect feeling of exuberance and movement, all without feeling harried or frantic.

There are other elements of course (like blue timers that allow the use of spell cards), but that is the gist of it. And what a gist it is!

The latest game I played with my 9-year-old daughter had her yelling “GO! GO! GO!” as she willed the last grains of sand to slide through so she could get a move in before mine. But it wasn’t meant to be, as my timer cleared first and I was able to make that last attack to take her last piece off the board.

She immediately asked if we could play again and, had it not been her bed time, that would have been an easy ‘YES’ because the skirmishes only last 10 minutes each. Wartime plays quick and whets your appetite for the very next play.

I’ve been thinking for a bit about what I’d say for my final thoughts. Here’s my bottom line: Wartime: The Battle of Valyance Vale is a special game.

The overall gameplay with the stacked units and pace set by the sand timers feels important. By that I mean I feel that Wartime as brought something innovative to board gaming. While the fantasy theming was solid and worked, this system is something great. I can see a re-theme in space, as a zombie rush, for licensed properties, and more.

My point is that I hope Wartime: The Battle of Valyance Vale gets the attention and praise it deserves, because I want to play more with this system and see it continue to evolve. The game doesn’t seem to be getting much buzz now, but I honestly feel it deserves consideration in the “best of” 2017 conversations.

One final thought: Wartime: The Battle of Valyance Vale will be wholly unlike anything else you have in your gaming collection. When you couple that with the fact that a skirmish is played in under 10 minutes, this is the kind of game that makes for a no-brainer decision for your gaming rotation. Why reach for yet another worker placement or deck building game when you can add a game to your collection that does something entirely new and does it well?

The Official Handbook of the Marvel Universe: Decades Old Encyclopedias that are Still Special to This Day

Top 7 Board Games My Wife Likes