The Warhammer 40,000 (40K) universe is impressive in its scale. The tabletop game – the focus of this post – began in 1987 and is in its eighth edition. And behind it stands a library of literally hundreds of novels. In any given bookstore, 40K books can dominate an entire bookshelf.

My initial exposure to anything Warhammer 40k was Eisenhorn by Dan Abnett. I distinctly remember picking it up in the Hastings store due to nothing more than its size and its location in the Sci-Fi/Fantasy section.

I fell in love.

Next came The Founding, another impressively large omnibus by Abnett in the 40k universe. I gobbled it right up. Then Ravenor! And then…

And then a dozen years of nothing even remotely tied to Warhammer.

That is, until last weekend when a friend sent me the Warhammer 40k Battle Primer (available for free here). A couple days later we sat down for a quick skirmish that quickly won me over.

Here are four reasons why you should give Warhammer 40k a try.

4 Reasons to Dive into Warhammer 40K

1. Free Rules! As mentioned above, the system’s rules are free–at least so long as you’re not participating in Matched Play (more on the different play types here).

2. Simple Rules. Each of your turns consists of 1-6 phases:

It’s conceivable that the only Phase you participate in during your turn is Shooting (if you don’t feel the need to move) or even Movement (your units might not yet be within range of the enemy), but that likely won’t be the case for long as units advance, come within range of weaponry, and are lost (mandating the Morale phase).

Stats that determine things like how far a unit can travel during the Movement phase, the range(s) of their weapon(s), and other useful bits of information can be quickly collected and referenced using the Battle Scribe app–which is also free on both Android and iOS platforms.

I’m also gonna drop this here handy-dandy stat descriptions page on you, because if you’re like me and have never played…it helps!

3. d6s for days. Drop $5-$7 on 36 d6s from Chessex and you’ve got all you need to play Warhammer 40k. And depending on the scale of your battle…you might need even more.

Some units gets multiple attacks (A), too.

Just…trust me:  You’re gonna roll a metric ton of dice each turn (even when its not your turn).  And isn’t rolling dice one of the most satisfying experiences of any tabletop RPG? Warhammer 40K has all the dice rolling you can stand, and it is glorious.

4. Minis for days. This is both a pro and a con of the Warhammer 40k tabletop game. 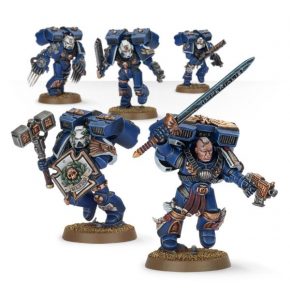 Pro: There are lots and lots of minis! A massive variety exists just waiting for you to assemble and paint.

Con: This is pretty much how they’re making their money on the game. The rules are free, but the minis are not. To move beyond playing with your standard troop units, you’ll be dropping some coinage on the more elite units and vehicles.

The variety of units and minis brings an impressive variety to the gameplay. The biggest hurdle to the game isn’t accessibility (free rules!) and it isn’t difficulty (simple rules!), it is the financial investment required to raise a varied army of minis.

And, yeah, I guess you could use whatever minis you wanted…but the Warhammer licensed ones are gorgeous and imposing on the battlefield that is your kitchen table. I’m lucky enough to have a friend who already owns a few dozen minis, so we played with them…but soon I will be purchasing and painting my own army!

Large Scale Battles in Your Home 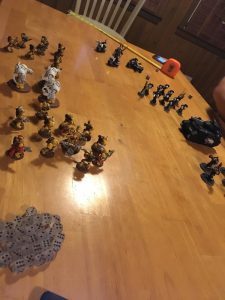 If you go all out with Warhammer 40k and get minis for all your units and customize your army, a small-scale skirmish will see something like 30-50 minis staring each other down across a battlefield, awaiting your orders.

I had a blast trying the system out and moving minis all over the table. Shooting from a distance was satisfying, but so was Charging and Fighting! It’s satisfying to inflict most of your Wounds. It’s demoralizing to score so many hits only to have the enemy take no Wounds at all due to successful Saves.

It is a wonderful mix of strategy and luck of the dice.

Glass Cannon Podcast: Episode 134 – It’s My Party and I’ll Scry If I Want To

Necromunda: Hired Gun and More of This Week’s News for Nerds