Throughout the 40 year history of Dungeons and Dragons, there has always been a small but vocal group of critics who insist that D&D warps the ability of players to identify truth from fiction.

My first instinct in response to these few but vocal critics is always to imagine them pouring out of a crazy clown car as I roll my eyes so hard that it causes me to black out for a fortnight. But in the age of “fake news” and manipulative propaganda that millions are endorsing and sharing without thought to the voracity or “realness” of it, I think it’s worth 900 words to use D&D as an analogy for identifying truth versus fiction.

Buckle up, nerds. We’re venturing into the Upside Down, the world where psychology and Dungeons and Dragons history meet.

These accusations of confusing fact from fiction get their start via a few high profile tragedies that happened decades ago. The most infamous case was 16-year-old Dallas Egbert, who disappeared from Michigan State University in 1979. Dallas’ desperate parents hired a private detective named William Dear to help locate their missing son. Unfortunately, Dear was a narcissistic former Florida highway patrolman who was more interested in self-promotion than in discovering the truth about Dallas.

Dear honed in on a theory that a mysterious “dungeon master” had brainwashed the young and naive Dallas Egbert. Dear’s theory that D&D warped Dallas’ mind was proven to be pure hogwash, but the disappearance of a child prodigy from a wealthy family was catnip to the media. The month that Dallas was missing was more than enough time for the story to sweep the nation, driven by public anxieties that feared for the minds of young people. The narrative of D&D being a “dangerous game” was solidified and millions of Americans now feared that young people couldn’t discern a Mind Flayer from a Dungeon Master.

“Frame” analysis was his attempt to explain how individuals conceptualize, structure, and perceive the world around them. The research was about the organization of experiences that guide the actions of individuals, groups and societies. To illustrate the concept of the frame, Goffman uses the example of a picture frame. Obvi. A person uses the picture frame (which represents structure) to hold together his picture (which represents the experiences in his life).

Let’s take this straight to D&D, where it will make the most sense to us nerds. Using Dr. Goffman’s work, we can sort D&D into 3 frames of meaning:

1. The content of the fantasy. This frame is the imagining your character as an elf or what have you, plus includes the roleplaying aspects of the characters. It’s a frame of engrossment in an imaginary fantasy world.

2. A second frame would be the rules of the game itself. Think of this frame as a really cool picture frame with d20s glued around the edges. Maybe you got it from Etsy or something, IDK. The picture inside would be a bunch of +1 modifiers, d8s for damage, your 8 CHA, and all the other rulesy stuff.

3. The final frame of meaning is the commonsense reality of our lives, this example being folks sitting around a kitchen table with paper, pencils, and books in front of them. 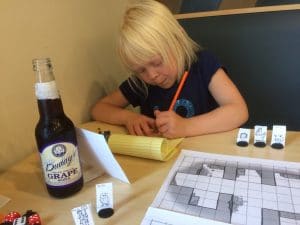 Despite what William Dear and other critics of D&D claimed, players are easily able to move fluidly between the frames, never once confusing fantasy with reality. An example:

“Lay down your weapon, orc, and we’ll allow you to live this day! I rolled a 14 plus 3 for my modifier, giving me a 17 for my intimidate check. Hey, can somebody pass me those Doritos?”

Sentences like the above are commonplace around the D&D table. And a group of players knows instantly which frame everyone is referring to at any given moment, the above example illustrating this. “Lay down your weapons, orc” (frame of imagination), “I rolled a 14” (frame of the game), and “pass me those Doritos” (frame of MSGs) is clearly evident. Not a single D&D player would confuse fantasy for reality and believe that the buddy next to you is a ferocious orc who is munching on delicious MSG-laden tortilla chips.

In fact, the term “metagaming” arose for those times when players may attempt to act on information they know but their character likely would not. A player saying, “Hey, stop metagaming!”, is illustrative that another player is purposefully mixing frames 1 and 2. But there is no mental confusion there. The meta gaming player is simply trying to get a leg up in the game.

Still, critics say that people confuse fantasy and reality, which is cuckoo banana pants absurd. Even small children intuitively understand the frames of reality that Dr. Goffman outlined. My daughters play with Barbies and I promise you that they’d be the first astounded if a Barbie would come to life and start talking to them.

And if you do actually confuse a Mind Flayer for a Dorito? Well, that’s a problem that is beyond the scope of my 900 word limit. But for the rest of the 99.9% of D&D players? We’re just thankful we have a game that is wholly imaginative, has a wonderful set of analytical rules, and also plays best with some delicious snacks nearby.