A look at the missing members of the Mighty Nein.

In the previous post, we looked at the other half of the group known as the Mighty Nein, the name the PCs have taken for themselves in the second campaign of the web series Critical Role. In this post we will look at the rest of the party and why they have been clumped together.

Minor spoilers ahead for season 2 of Critical Role. 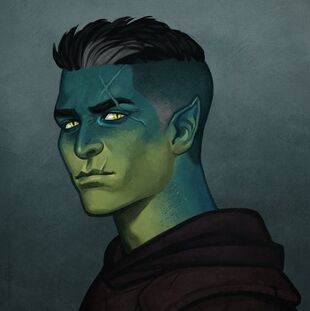 Fjord is a hexblade warlock and one of the characters that you get the sense that DM Matt Mercer has had the most fun interacting with.

Given the nature of a warlock having a patron, it has been open fodder for the DM and in a couple of one-on-one sessions we have seen, Fjord is slowly being guided by this sea-based patron of great power as he develops his powers.

His power set is fun, as a hexblade can be played as both an upclose fighter with his weapon or use something as routine as an eldritch blast cantrip to do damage at a distance.

As a viewer, it has been fun to watch the player Travis take on a different role. In season 1, he was the very straight ahead hammer barbarian Grogg, with a low IQ. In this team, he is almost by default the charismatic face to face communicator of the group.

Finally, we got some of Fjord’s backstory in feeling out of place as a half-orc, even to the point of filing down his tusk to hide it and in the last two episodes, we learned that Fjord spent some time as an orphan. 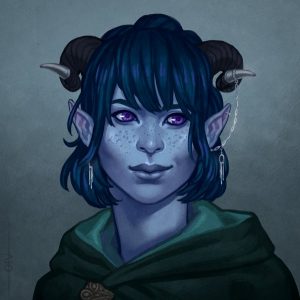 The second tiefling in the group is much different from Molly Mauck. In part, Jester is a cleric, a devotee of The Traveller, a possible trickster god. What we mainly know is that the Traveler has a devoted follower in Jester, who likes pulling tricks on people, especially if they involve changing signs and/or drawing phallic symbols as well.

In combat, she has proven to be an admirable combatant, relying on a combination of Sacred Flame, Toll the Dead and her spiritual weapon, which manifests as a giant lollipop that acts like a mace when it is bludgeoning her foes.

Jester tends to be at the center of adventures but also, at times, is a bit of an outsider. In terms of her backstory, we have seen that she is the daughter of a well known escort and because of that, she is very comfortable in talking about sex but also seemingly sheltered in some ways. Jester also is a bit of a flirtatious character, at times, having danced and wooed Caleb but also have a love for Fjord, as evidenced by the fact that she calls him “Oskar” after a similar half-orc character in a romance novel that she has been reading.

All in all, Jester and her antics have been some of the most enjoyable laughs of the series while also showing her to be a deeper, more dynamic character long term. 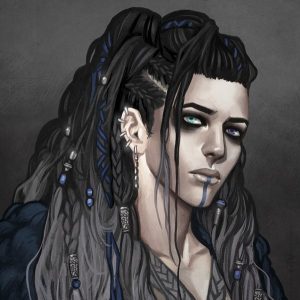 So, in the real world, Ashley Johnson is an actress and one of the leads of the NBC show Blindspot. That means there are times when she disappears from the campaign, which has made it hard for us all to get a glimpse into her as a character.

But we have seen enough of this Aasimar Barbarian to know that she is excellent in melee combat, though you can still see the player building confidence in the character.

We also have seen one instance where Yasha encountered the Storm Lord, the god of weather and battle that Yasha has a connection with, as she and the god spoke as a storm came raging towards the group while they were camping outside.

So, why have we grouped these characters together?

In story, Fjord, Yasha, and Jester are all kidnapped by some kind of slaver and taken away from the group at the end of Divergent Paths, which is episode 25 of campaign 2.

In real life, there are circumstances as Ashley had to return to shooting her show and Travis and Laura together celebrated the arrival of their first child into the world. With that in mind, these characters are going to be taken off the board, at least for a bit and it will be interesting to see how the cast deals with the changes and guest stars, which DM Matt Mercer hints at on the show and on Twitter.

It is the first real switch of several characters all at the same time and it should create some interesting stories as I don’t think the Mighty Nein will be too pleased with their friends’ disappearance like that. But you can click here if you are interested in an update on the primary cast.