Today, most people acknowledge that the shaping of the X-Men universe by Chris Claremont in the 80s and early 90s is one of the best achievements of that era of comics. And rightfully so.

As a result, the work at the distinguished competition somehow gets lost, yet there are parts of it that are equally great. So while Claremont and various artists were shaping the X-Men, New Mutants and others, Marv Wolfman and George Perez were doing outstanding work on The New Teen Titans.

The Teen Titans was a legacy title that essentially had been made out of the sidekicks of the Justice League’s major characters. In the 1980s, Wolfman and Perez, who were moving to exclusive DC contracts, were given the task of creating a teenaged equivalent to the wildly successful X-men titles.

So, with some work, they bounced around the line-up, introducing some new characters, while also upholding some of the legacy characters as well. And in 1984, as they were preparing to write and draw what was voted the storyline of the year, Perez and Wolfman had a line-up of: 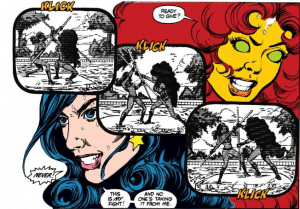 In Tales of the Teen Titans #42, we see the Titans as they are being watched, through the eyes of their newest recruit Terra, a half-sister of the hero Geostorm, who is very powerful and able to manipulate the earth.

Over the course of the issue, we watch as the Titans let her into their world, showing her their homes, their habits and identities, as a sign of truly welcoming her in. That welcome culminates with her and Changeling sharing in a very sweet teenage first kiss.

Through Perez’s stellar art, we also get the sense that these things are being recorded through her eyes and we learn at the end, Terra is partnered with Deathstroke the Terminator, who has taken on a contract that his son, who had superpowers and went by the name The Ravager, was unable to complete. 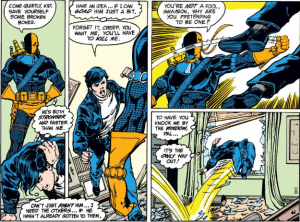 In Tales of Teen Titans #43,  we see the end results of the spying Terra had done previously. We open on the fight between Dick Grayson and Terminator and then as Dick attempts to reach all the others, we discover the various ways that Terminator and Terra, knowing the weaknesses of the Titans, took them out.

The end of the book is the revelation of the Terminator’s ex-wife and silent, mute son Joseph wanting to partner with Grayson to stop Slade Wilson and Terra. The introduction of these two shapes the rest of the story as it shifts to both finish the Teen Titans and their predicament but also tell the backstory of Terminator, who had become the Titans’ greatest nemesis.

In Tales of the the Teen Titans #44, we get the backstory of Deathstroke, the Terminator. This backstory is easily one of the things that helped to make Deathstroke one of the first real anti-heroes of the DC universe, when coupled with the amazing character design of Perez; that mask with the blacked out half over the eye which Wilson lost is just such an iconic one.

At the end of the issue, we see Grayson ready to return with a new alter-ego as we get our first glimpse of Nightwing and Terminator’s mute son Joseph reveals himself to be Jericho, whose power enables him to lock eyes and then take over control of someone else’s body. 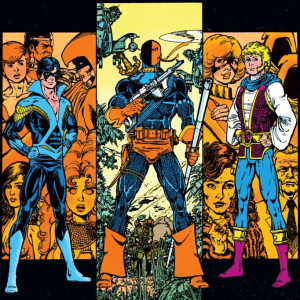 The finale of the story comes in Annual #3 of Tales of the Teen Titans and to be honest, it doesn’t have much in way of surprises until the very end. Nightwing and Jericho storm the HIVE base where the Titans have been delivered and Jericho uses his power to take over his father, so it appears to Terra that the Terminator has betrayed her and it that sends her into a tremendous rage.

I don’t want to spoil it but I will say the ramifications of the end carry forward for a year or more in the comics.

So this story was well regarded for a variety of reasons. One, it is a story that moves the sidekicks firmly into adulthood. As we see Dick Grayson leave behind the Robin moniker, it is a reminder that these characters are becoming adults and facing very adult circumstances.

Much like the introduction of the All New, All Different X-Men line-up signaled a move away from being students to being a superhero team for the X-Men, the Judas Contract does that for the Teen Titans.

Second, it develops Slade Wilson aka Deathstroke the Terminator into a more full figure. Half of the story is his backstory being told and setting him up not as a maniacal villain but a combat hero with a powerful sense of code, even if it costs him and his family.

Third, the heroes being betrayed by one of their own was unexpected in this era and Terra playing the team the way she did is diabolical.

That said, there is at least one important piece of the story that would not (and should not) sit well with modern readers. In the story, Slade Wilson and Terra are in a romantic, sexual relationship, not just a business partnership to end the Titans.

In Teen Titans #34, we see the team celebrating Terra’s Sweet Sixteenth birthday party. It is icky and some of the nuisance of the story is Wilson painting Terra as the sexual aggressor in the story, yet he clearly knows he is using it to manipulate her. I can’t imagine a writer or editor allowing this part of the story to take place in the modern comics world, as it is woefully unaware of the realities of sexual abuse and power dynamics. So reader beware and note to avoid this storyline if that could be an issue that you don’t want to work through and filter as a modern reader.

On the whole, the Judas Contract is worth revisiting to me. Yes, the Terra and Wilson relationship is bad and hard to watch, even as it is somewhat minimized. And I will say the end of the story brings to head some significant and major consequences of that abuse. But the maturing of the heroes, the deep pain involved in both the end of the story and in the sense of betrayal that they all find resonates. Since the book came out, this storyline has been played out in several animated projects for DC, which makes total sense as this was one of the best storylines that come out of the 1980s for DC.

My 7 Most Anticipated GenCon 2018 Board Game Releases