What sets the Carthage board game from SAS Creative apart from the competition is the vast amount of gameplay options included right off of the shelf. Carthage takes a gameplay style similar to that of The Legend of Korra: Pro-Bending Arena (deck building with miniatures combat) and throws in modes and variations usually only seen in expansions. As soon as you have the game in hand, you’ve got more than half a dozen variations on the standard “every man for himself” format of the “vanilla” or base version of play. 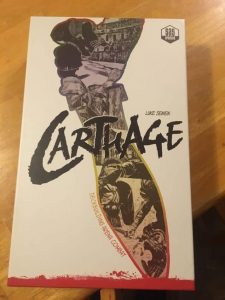 So today I’m not going to do a traditional review. Just trust me when I say that Carthage’s components are well done across the board (with the exception of the Beast tokens which were a bit dark and muddled-looking) and the gameplay is simple while the strategy is plenty high enough to keep gameplay engaging and challenging, regardless of the mode.

All these things Carthage does very, very well, but that’s not what made it the smash hit it was during my Wednesday night gaming group. This game’s primary strength, the thing that makes it 100% worth a buy, is all the different ways you can play Carthage. That’s what I’m going to break down for you in this overview.

The Carthage Board Game: Player Modes

Instead of only making every match a true free for all, Carthage comes stock with the following alternative gameplay modes:

You and your partner are chained together and cannot have more than one hex space between you during play. This significantly affects your movement about the arena; particularly because your ability to move (along with all other options–attack, gain Favor, etc) is determined by the hand of 5 cards you have for that round. If you can’t move, it doesn’t matter how much movement your partner has in hand–you’re both stuck!

And when one of the two chained gladiators falls in battle, the other now has a freedom of movement that is tough to match by the chained pair. Strategy shifts a bit mid-game, and that is awesome!

You might be outnumbered, but your pair of gladiators get to try and affect gameplay in their favor by picking 4 of the Modular Rulesets (see below) for the match that they use exclusively. Another fun variation.

The Carthage Board Game: Advanced Modes

Advanced Modes shake up the standard rules for any game mode.  Carthage comes with two:

This added feature allows dead gladiators to stay involved in the gameplay by taking on the role of one of several animals, complete with their own actions, and re-entering the fray.

Some of the beasts let you return and seek revenge as a damage dealer. Others allow you to buff combatants; giving them an edge over the gladiator who dealt you the killing blow.

Bottom line is that the option to not have to just sit there while your friends play out the scene is genius. 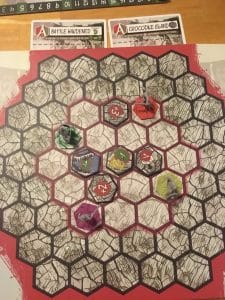 These cards come in two flavors: Active Conditions which are permanent conditions of the current game; and Favor Actions that can be purchased by players during the Favor Phase to do all sorts of things including sabotaging an opponent’s deck, changing the battlefield’s layout, stack your deck a bit, and make it more costly for opponent’s to purchase cards to add to their deck.

These 16 cards do a whole lot to shakeup gameplay. One of our favorite play throughs involved Active Condition cards that gave us all more starting Armor (health) but also made all black hexes of the arena hungry crocodiles.  We had so much darned fun knocking one another back into the bitey reptiles!

The Carthage Board Game: Mini Expansions

These additions bring some custom flavor to your selected warrior and some new and unique cards to the Action Deck for purchase and play…and best of all:  They’re included.  That’s right.  You get all of this – everything listed in this post, actually – with the base game.

The Kickstarter for Carthage had 15 $139 spots at which level you would be immortalized in name and picture on some additional Action Cards. These 15 extra cards are included in every copy of the game, so that’s pretty awesome!

Each gladiator has three unique equipment cards that let them pull stunts that no other fighter can manage. To activate them, you just have to discard literally any other card from your hand (which is awesome because that gives the standard Starting Deck cards some major power upgrades). It does cost Favor to reset the use of these moves, but they’re worth it, for sure!

This is an app-driven solo or co-op mode in which any number of gladiators can attempt to take down a charioteer who circles the arena and his prey like a shark that senses blood in the water. You can’t use any of the Theater Legend, Equipment, or Modular Ruleset cards in this mode. 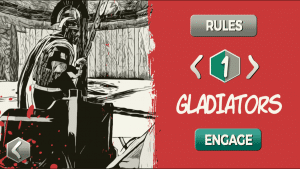 Playing solo against him can feel a bit like a cat and mouse game as your movement is fairly limited and he is pretty darned mobile, but at the same time there are lots of Actions of his that will be more or less wasted since you won’t be close enough to damage. The trouble is that you’ve only got 8 Rounds to take him out, so you have to play pretty aggressively (and come on…this is a gladiatorial combat game; wallflowers need not apply!).

The difficulty is scaled up by increasing the charioteer’s HP by 15 for every gladiator in the ring. With multiple gladiators, that extra HP of his will be needed since he’ll pretty regularly be in someone’s striking distance, but, at the same time, a lot more of his attacks will hit, too. I think they found a good balance here.

Lastly I’dd add that the back page of the instruction booklet includes more than half a dozen Scenario Set-Ups that have fun with the arena’s geography and power-ups (tokens that give players immediate boosts to damage, Favor, movement, etc). That is a nice touch, as well!

Carthage brings the thunder when it comes to gameplay variety, depth, and challenge and that is what shifts it from good to great. There is a whole lotta game inside this single box! The Carthage board game is a super impressive offering from SAS Creative.

You can buy Carthage from Amazon or ask for it at your FLGS. And you definitely should.

First Look: Everdell, a Board Game with Little Critters

Board Game Kickstarter: Rise in the Ranks in Shadow Kingdoms of Valeria