Against the Aeon Throne: A Great Way to Get Started with the Starfinder RPG

The Starfinder team is doing something just a little different with the latest Adventure Path storyline for the Starfinder roleplaying game. They are only telling half a story.

I’ll explain. Paizo Publishing–the makers of both Pathfinder and Starfinder–is perhaps best known for perfecting the Adventure Path model, a method they use to tell a story across six floppy-backed books that will allow you to level a character all the way from level 1 through the mid-teens or higher. They’ve released 20+ of these adventure paths for Pathfinder and one–Dead Suns–for Starfinder.

Paizo’s second Adventure Path for Starfinder is called Against the Aeon Throne. Interestingly, Aeon Throne only spans three books, taking adventurers from level 1 through level 7. To be clear, it’s a full adventure arc but it’s a fun experiment in trying out a faster format.

Let’s take a look at Against the Aeon Throne.

Here’s a brief summary of the three books, all of which are available right now: 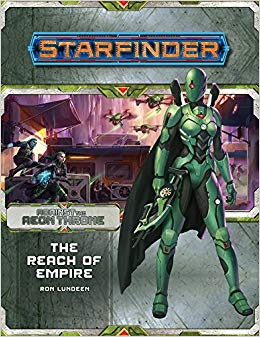 Now, let’s talk about Against the Aeon Throne without giving huge spoilers. Ron Lundeen is an excellent adventure writer. The tiny colony and the planet he created for the first book of the adventure is wonderfully done.

I had the pleasure of interacting with him on a Starfinder panel. It is clear that he is intelligent and competent, two things that come out in his portion of the Aeon Throne AP. That is not at all to imply that his contribution isn’t creative as well. On the contrary, there are some fist pumping moments. It’s just to say that there is a structure and sufficiency to his adventures and that comes through a thoughtful attention to adventure design.

Some of this carries over to book two, particularly in regards to the space stations and the quirky characters that populate it. But overall, Escape from the Prison Moon was an odd read for me. While the trope of a prison breakout is exciting, I’m not not entirely sure it worked on paper. It..strained credulity for 4th level characters to take down a high security prison moon, you might say, even for the science fantasy world of Starfinder.

Book three is oddly an echo of book two, being that it is another liberation mission. Yet, the encounter with the big bad paid off. As did the inclusion of a recurring gun-for-hire, that gave a nice wink and a nod to iconic sci-fi characters like Boba Fett.

Overall, I really enjoyed Against the Aeon Throne. It further expanded the lore of Starfinder and introduced some wonderful new characters, monsters, and factions. The back matter material in the three books was consistently excellent. Every time I get a new Starfinder AP volume I get excited about the new lore being added to a game that has come a long way in just one year.

The experiment worked! A three-volume AP gives a full story arc, but without the couple years time commitment that is required for a full six-volume AP. Plus, levels 1-7 are the most popular levels with players, so it hits the sweet spot. Ultimately, this makes Against the Aeon Throne a great entry point into the Starfinder roleplaying game. You can get all three volumes here.

The Galaxy Exploration Manual: Why I Love Exploring the Galaxy of Starfinder