There has always been something enduring about tiny villages in roleplaying games. Quirky NPCs seem to shine a little more brightly in tiny villages. Taverns feel a bit more quaint in villages (and give better quests I might add).

The tiny little town I grew up in was a wonderful place to be raised. And it didn’t hurt that I could walk out my back door straight into the woods. That’s not entirely different than roleplaying villages, where adventurers make a base in the inn, yet there is a whole world of wilderness for them to quest in that’s just outside the village walls. 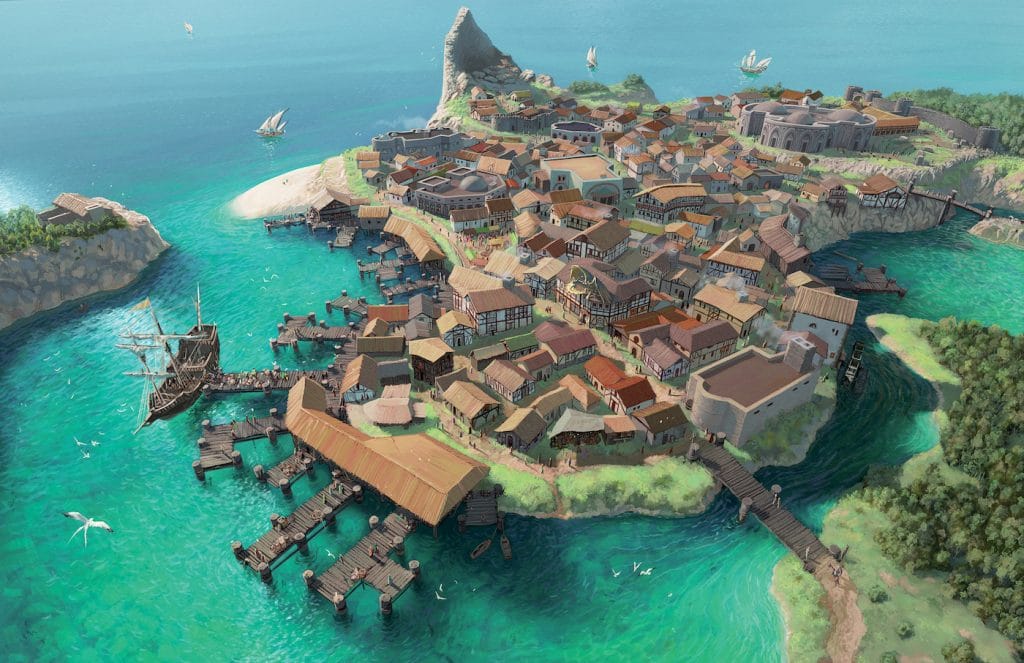 This is true for Sandpoint as well, perhaps the most enduring tiny town in all of roleplaying history. Sandpoint, of course, is the little town that begins Pathfinder’s iconic Rise of the Runelords adventure path, but has popped up here and there in a variety of other Pathfinder products.

Sandpoint has been attacked by goblins. It has been the setting for grisly murders. It has busybody nobles and a cathedral and pier. In short, it has everything that is necessary to have a good time roleplaying.

Paizo recently celebrated Sandpoint by releasing a 96-page floppy sourcebook just for the tiny town. Sandpoint, Light of the Lost Coast goes building-by-building like a perp sweep, giving evocative descriptions of every single structure in the entire little town.

It’s not a perfect book. There is inexplicably no index or table or anything to break out and organize the buildings in a way that would help roleplayers find information more quickly and easily. After just a page or two of high level setup, the book literally lists buildings one after another for dozens of pages. I get that roleplaying games have long been an industry that relies on blocks of text, but in 2018 it’s getting ridiculous that more care isn’t taken in making a book be thoughtfully organized.

But let’s not linger on that thought: it really is a great book. Did I mention there is a fold out map in the back? But the book is great mainly because Sandpoint really is a nice little town. Yeah, yeah, I know it’s imaginary! Yet, Sandpoint has come alive in a sense. Paizo has brilliantly realized this tiny little town and made it into a place which is ripe with stories.

Despite the lack of an index, Sandpoint, Light of the Lost Coast is a wonderful book, even if you are homebrewing and not adventuring in Golarion. It’s chock full of NPCs and buildings that can be pulled out, tweaked, and used in tons of settings. But if you are a Pathfinder / Golarion fan, then this absolutely is a book for you.

You can get Sandpoint, Light of the Lost Coast from Amazon or direct from Paizo.com. Better yet, ask for it at your FLGS.

Introducing Keyforge: A Primer On The First Unique Deck Game