By The Bullpen On Dec 20, 2018 Last updated Dec 5, 2018
Share TwitterReddItPinterestFacebookEmailPrint

Our category today is “Best BIG 2 Comic,” namely anything from the House of Ideas or the Distinguished Competition.

This year’s slate was super impressive (pun totally intended), but we narrowed it down to four before opening the vote to determine the winner of the Nerdie Award for Best BIG 2 Comic.

All New Wolverine had Laura Kinney aka X-23 taking on the mantle of Wolverine from the then cased-in-adamantium-and-presumed-dead Logan. And she completely steals the show! In my opinion, Laura Kinney as Wolverine ranks among the two best things to happen in Marvel Comics in years…right alongside the introduction of Gabby aka Honey Badger, which also takes place in this run!

This is the series in which Laura really establishes herself as a marquee X-Man in my opinion. You wanna know why she’s running around on so many of the X-Teams all of a sudden? This run is why. Read it. Love it. Love Gabby. (The last of these cannot be helped).  – Adkins

Every once in a while, a creator or group of creators does something so unique and excellent in the realm of “normal” superhero comics that they then get to go and tweak and twist the form some more. After the stunning success of the Vision mini-series from Tom King at Marvel, DC allowed him to take on the character of Mister Miracle, Scott Free, one of the New Gods created by Jack Kirby when he was departing Marvel and creating a whole new world.

And, like the Vision series, it is an odd yet compelling look at the escape artist/hero and his relationship with his wife and ultimately an examination of parenthood. It is understandable that so many people weren’t quite willing to take the leap of faith this book requires but when the 12 issue series is gathered in a trade in mid-February, I wouldn’t be surprised to see the buzz for this book to grow more and more.  – Jaws

DC has done it again! They’ve taken some of their more mystical figures and put them on a team, The Justice League Dark! Join the mighty Wonder Woman, magical Zatanna, Detective Chimp Bobo, Bat-Thing, and the mystical Swamp Thing, as they protect the world’s magic from the latest threat! If you enjoy the darker side of the DC Universe you’ll love this adventure!

With amazing writing from James T Tynion IV and the talented artwork of Raul Fernandez and Alvaro Martinez, you can’t go wrong! This is sure to be a big hitter from DC over the next few months and it’s already been one of the best Big 2 comics of 2018.  – Adam

But the Nerdie Award winner is… 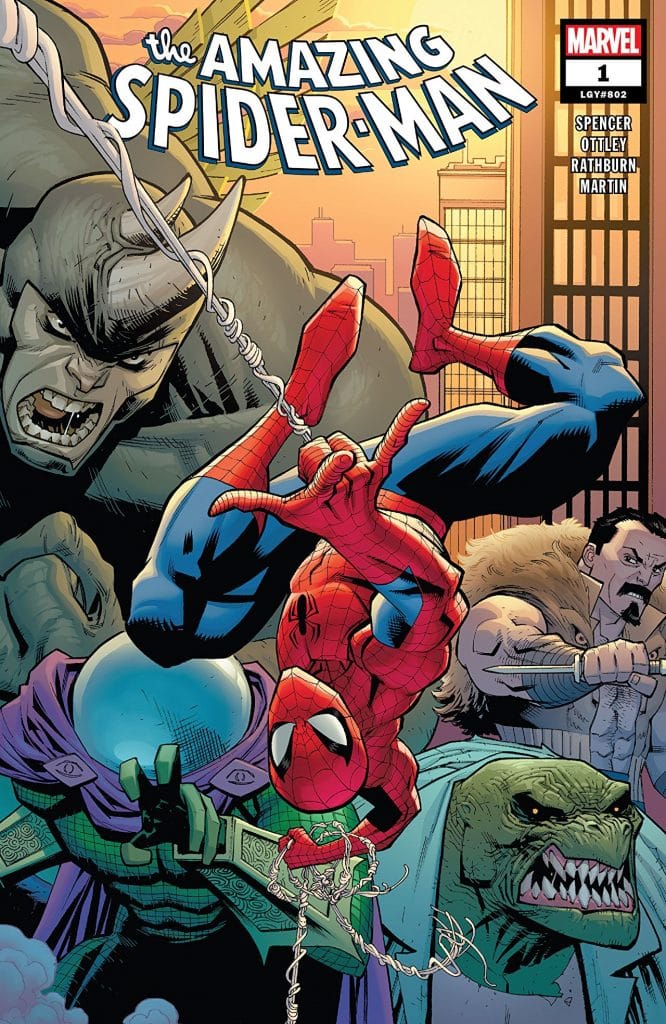 2018 has been a fantastic year for Amazing Spider-Man. Dan Slott’s longtime (and mostly astounding) run on the title ended, leading to yet another Amazing reboot. But this latest reboot in a seemingly endless cycle of reboots should not dissuade anyone from checking it out.

This latest volume of Amazing Spider-Man has been nothing short of, well, amazing! Nick Spencer has taken over the writing duties for Amazing Spider-Man, making the comic a must-read extravaganza of wonky comic bookie goodness.

It might be difficult to follow such a longtime creator like Dan Slott, but this isn’t Spencer’s first foray into the Spider-Man ecosystem. Spencer wrote the absolutely hilarious Superior Foes of Spider-Man a few years back, a title that had more in common with the BWAHAHA-era of Justice League International than anything Spider-related.

Fortunately, Spencer brings that level of humor, absurdity, and its main star, Boomerang, along with him to Amazing Spider-Man. Following a “back to basics” approach, Amazing Spider-Man reads like a loose free-for-all where anything is possible. Gone is the effort to make Peter Parker Tony Stark 2.0, with Peter having nearly everything taken from him. He’s not quite rock bottom, but he’s close enough to make life a struggle.

Backed by an excellent supporting cast and a mix of humor, absurdity, and unabashed action, Spencer has managed to inject new life into the flagship Marvel title. It’s a book that has fun, which is an excellent remedy to all the grim comic books on the shelf today. For all those reasons, Amazing Spider-Man wins the 2018 Nerdie Award for Best Comic Book from the BIG 2.   – Brandon

Comic Characters You Should Know: Morbius, the Living Vampire