Ex Libris is the library-themed board game from Renegade Game Studios.

Very, very few games have you competing against your friends to build the best gosh darn library possible so that you might become the Grand Librarian. Ex Libris is one of those games (Probably the only game like that, but why take the chance that I’m wrong. Oh, the shame I would bring upon my family. The absolute shame.) 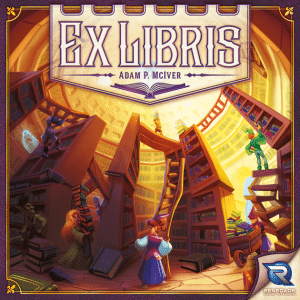 A new seat has been opened on the Village Council, the position of Grand Librarian. As a collector of rare and exceptional tomes, you are a shoo-in for the seat. Or you would be if you weren’t competing against your book-collecting colleagues who are also eager to grab the seat. Your best shot at earning that seat is building a stable, focused, and eclectic collection of books through a number of turns placing your assistants at spots around town and shelving your newfound tomes.

Once a player shelves a number of books determined by the number of players, one final round is played and each collector’s library is scored.The winner is crowned Grand Librarian.

The short version of the review–he now says several hundred words into the article– is that you should play this game. Everything about the game works and works well. Within a few turns of the first game, you’ll start seeing how the various town tiles and labs work together for killer combos.

My mom’s go-to in the family game we played was to use The Igloo of Information’s special assistant (A snowman that prevents anyone else from placing their assistants at the same location) and the Auction House to get the cards for cheap and lock my dad and I out of betting. Depending on your group’s play style, you can either focus entirely on building up the best library you can cooperatively, or undermine and stymie the opposition to fill their shelves with banned books.

You can keep the ziploc baggies in the kitchen, all the game pieces fit snugly within their own section in the box. So snugly in fact that after keeping the game in my trunk where it slid around for a week, the pieces stayed put. The same could not be said for my Pathfinder Skull and Shackles card game. You’ll also want to do yourself a favor and read the titles of the books on the cards: puns-a-plenty.

Whether you’re a gamer with small children or a group looking for something more relaxed than saving the world or building up the city, Ex Libris will rarely stay on the shelf come game night.

Sam Wich never had a chance to be anything other than a nerd, he started reading his parents’ Expanded Universe novels in 3rd grade. Recently celebrating 10 years living in Pittsburgh, he shares an apartment with his cat Corporal M T Fuzzypants and the echoes of near constant puns.

Board Game Review: Summon Flowery Souls with Umbra Via!