Board Game Review: Preserve the Spirit World in Shamans by Studio H!

The Shamans board game, published by Studio H, is another fine entry into the world of hidden-role board games. It’s a genre that can be tough to standout if players feel like getting dealt a particular role has doomed them from the start. Luckily, Shamans combines elements of trick-taking to make itself shine amongst the rest.

Shamans is designed by Cédrick Chaboussit. The game features two roles – the Shamans and the Shadows. Shamans are attempting to protect the spirit world while the Shadows will do their best to destroy it. Player roles change each round as each player is also collecting individual victory points that can solely win them the game.

What do we think about Shamans? Get out your green poker visor and let’s check it out!

Shamans begins with each player being dealt one of the hidden role cards. They will either be a Shaman or a Shadow, and the number of each changes whether you’re playing a 3, 4, or 5-person game. What I really appreciate about the gameplay is that your role is only locked in for the round; each subsequent round has players assuming a new role card. This keeps the gameplay and strategy fresh.

The Guide for the round will then play a card. Just like other trick-taking games, the other players will then play their own card to the trick. What makes Shamans unique is that you don’t have to follow suit – in this case, the color – of the first card that is initially played. However, each card that doesn’t match suit will move the shadow pawn closer to the moon, at which point the Shadows will win the round.

Each card color has a world associated with it, matching its color on the game board. To take that a step further, each world also has a corresponding ritual that gets performed when all of the cards of that color are played within the round.

Rituals can be something like allowing the elimination of a player or earning a personal victory point. Completing a ritual is very powerful and shakes up the game; players of both roles will be trying to complete them while also hoping to out-maneuver their opponents so that rituals aren’t used against them.

Whoever places the lowest on-suit card gets to take an artifact from the stack, which might give them the ability to move the shadow pawn or could even force them to reveal their role to the other players. Winning the game requires players to work together while still pursuing their individual goals by earning victory points through rituals and artifacts.

The player who played the highest on-suit card becomes the Guide for the next round, and will also be the one performing the ritual if the on-suit world is now complete. There will be instances where the Guide is the only person who played an on-suit card, and therefore they get to take an artifact AND could possibly perform a ritual.

Any off-suit cards are placed on their respective worlds, which could also trigger a ritual. This means there is a lot of nuance and attentiveness to what worlds are getting close to completing a ritual so that your presumed foes don’t get to complete them.

Staking Our C.L.A.I.M. on Shamans! 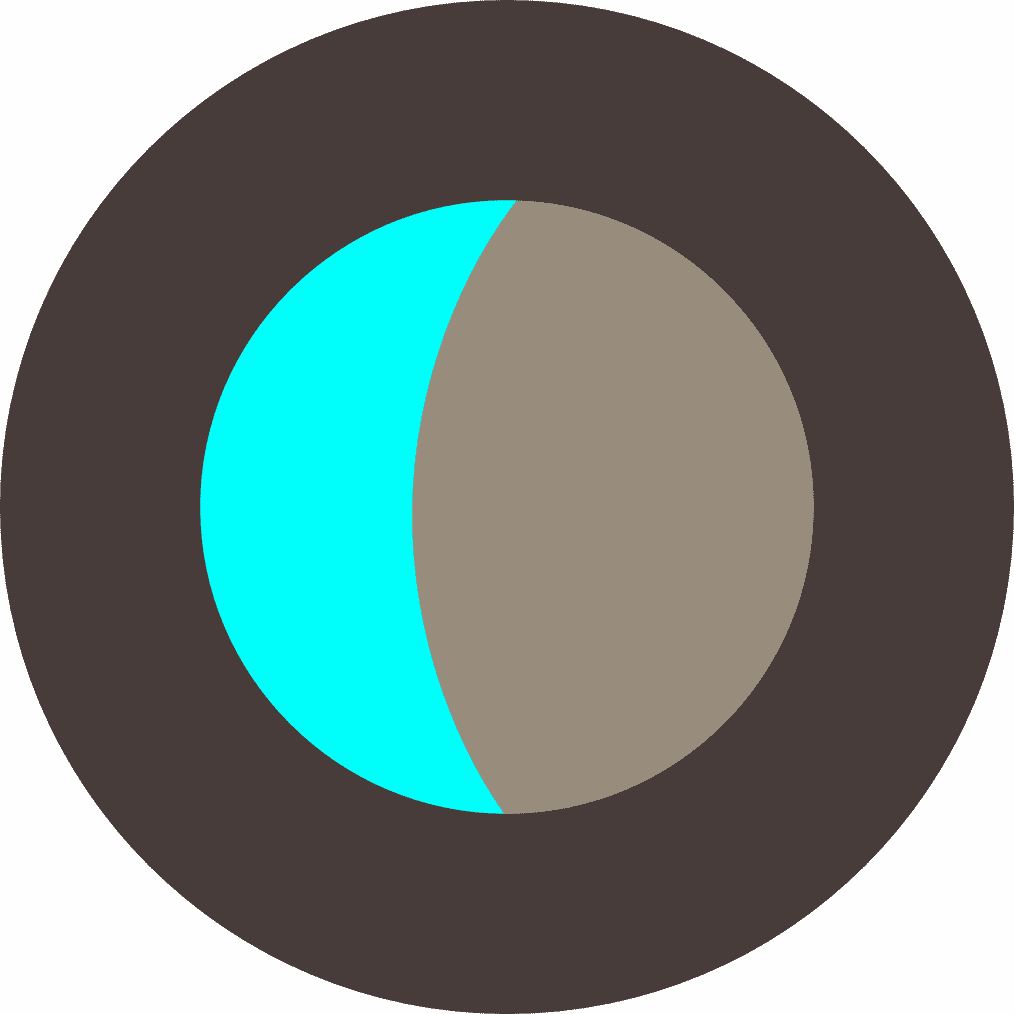 Shamans is primarily a trick-taking game, so of course you’ll be getting some nice cards to play with. Each features abstract art and a color representing one of the worlds in the game. The numbers on the cards are only printed on one of the vertical ends, which seemed a bit unconventional for a card game of this style.

The game board is primarily used to mark the position of the shadow pawn as it moves closer to the moon during the game. I absolutely love the way the board is highlighted with the shimmering teal spot-UV; that treatment gives the board an extra dimension and added POP factor.

As for the cardboard chits representative of the victory points and artifacts, they are good quality and have a great thickness to them. Just like any smaller chit pieces, the victory points tokens can be trickier to pick up, but it’s mostly a non-issue.

And lastly, the wooden shadow pawn is easy to grab and maneuver. Having the piece be a gray cylinder coincides really well with the more abstract nature of the aesthetics. Overall the component choices are intentional and all fit with the theme.

Let me preface the strategy section of this Shamans review by iterating that I am not the best person at hidden-role games. I do, however, have a history with playing trick-taking card games with my family growing up, even though Shamans flips the genre on its head.

Shamans exists in-between both genres, and therefore doesn’t necessarily showcase one or the other 100% as you might expect. For example, since players can play any card color instead of forcing the led color, some purists might argue that Shamans isn’t really a trick-taking game; it’s a card-playing game.

Similarly, because of the aforementioned trick-taking mechanic, it can be relatively easy to deduce who might be the Shadow amongst the group after only a hand or two of the round. So, are the roles really hidden at all?

I find the juxtaposition between these two game genres to be quite fascinating in how they open up the gameplay. Sure, someone might play an off-suit card but that doesn’t necessarily mean they’re a Shadow. What if they’re a Shaman but they don’t have any matching cards? Now it seems like they’re sabotaging the Shamans when in reality they couldn’t help them any longer.

Shamans is a game about reading signals, misinterpreting those signals, and hoping that everything shakes out in your favor when it all comes down to the wire.

It’s also a competitive game; just because you’re a Shaman doesn’t meant that you can’t play to win the entire game overall. There will be rounds where players are intentionally playing against their roles just to prevent the leading player from winning, or to help their own individualistic goals of winning instead. It’s really interesting to see how the strategy shifts over the course of the round from discovery to risk management, and how that similarly happens over the course of the entire game.

The overall look and feel of Shamans appeals to me greatly. It’s definitely abstract in its rendition of Shamans battling Shadows over the spirit world. In fact, without the role cards I wouldn’t really have any way to tie everything together in my mind.

You get the planetary nods with the moon phases and the borderline surreal artwork on the trick cards themselves. I do think that the world colors could have been a bit more distinct, at least on the board. It can be difficult to discern the yellow from the brown in particular, so accessibility is likely an issue in terms of color blindness. The cards do have the ritual symbols on them, and the yellow and brown are labeled differently in that sense.

Shamans is a beautiful, colorful game, which breathes some life into the trick-taking genre which historically is often themeless.

As a game straddling two genres, Shamans can appeal to a wide variety of gamers. It’s interesting though, because I’m not quite sure that people who really enjoy trick-taking will immediately want to play this game in the same way that people who really enjoy hidden-role games will immediately want to play it either. That’s not to say those people won’t enjoy Shamans; it’s a statement that Shamans is doing its own thing with both genres.

The main differences between typical hidden-role games and Shamans:

The main differences between typical trick-taking games and Shamans:

I find the tightness of each round to be a very exciting aspect of the game. As that shadow pawn marches ever-closer to the moon, you need to think about the Shamans’ hands collectively. Does everyone have a blue card to play? What card can I play that will do the least damage to the team? Is it worth moving the pawn closer to the moon in order to complete a specific ritual?

The rituals also offer huge strategic boons, even to the point where one allows players to swap roles with another person. They could setup the opposite side for victory, swap roles, and join the winning side!

There’s so much more to Shamans than just trick-taking or just hidden-role. Enjoying those genres doesn’t automatically mean you’ll like the game, but I would agree that it certainly helps. At the same time, the rules are approachable enough that you can play with gamers of all skill levels and experience.

If I had to describe the mood of Shamans in a single word, it would be tense. As I mentioned before, even knowing which players are against you doesn’t guarantee a victory. Every single card has meaning when it is played. There are no throwaway cards in this trick-taking game, because those cards all contribute towards future rituals.

When a ritual does happen, it’s exciting. Does that player have a dagger artifact that will allow them to eliminate another player? Or were they only hoping to activate the ritual in order to prevent others from doing the same? Even something as innocuous as earning a single victory point through a ritual can be a monumental occasion because it might allow someone to win in that round if everything goes their way.

Having this blend of individual versus group goals also creates an atmosphere of distrust. You need to look out for yourself first, even if that means burning some spirit bridges with friends along the way.

Shamans: Will You Be Tricked by the Shadows?

Shamans is a hidden gem in this mash-up genre that they’ve created. If the game had more stereotypical elements of trick-taking or hidden-role then I don’t think it would have been as good. Instead, Shamans goes on to make players rethink what they know about both genres, excelling in the process.

In both the Shaman and the Shadow role, the game seems to be stacked against you. When a game is able to do that, then you know that everybody is in for a fun, wild ride. And that is why we are awarding Shamans with our Nerds on Earth Seal of Awesomeness! I can’t wait to break out this game and showcase how it turns the tables on your expectations.

Shamans is available in the USA through Hachette!

Go and thwart those Shadows! Unless you are a Shadow, of course!

Disclaimer: Nerds on Earth was provided a copy of Shamans from Hachette Boardgames in exchange for an honest review.

Board Game Review: It’s Tea Time with Elevenses: The Guilty Party by Grail…

Board Game Review: Meet Your Best Friends in Dog Lover by AEG!

Board Game Review: Ascend to the Peaks with Trek-12 by…

Board Game Review: It’s Tea Time with Elevenses: The…

Board Game Review: Meet Your Best Friends in Dog Lover by…