A few weeks back, a few of us Nerds on Earth authors sat in on the Acquisition’s Inc Fathom event at a theater in Atlanta. That’s right: we weren’t even playing Dungeons and Dragons…we were just watching others play it. It’s a thing now.

As a bonus to watching Chris Perkins at work (ridiculous dragon costume and all), we were gifted a copy of Cloud Giant’s Bargain which: 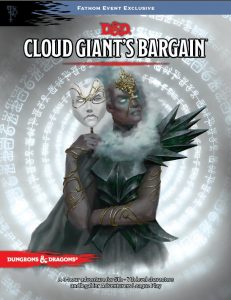 And what a four hours it proves to be!  There is a whole lot right in Cloud Giant’s Bargain.  Here’s a short review of the module.

Cloud Giant’s Bargain: The Book Itself

For a free handout, this thing is really well produced.  The art on the cover is on par with that which graces the front of any of the campaign books Wizards of the Coast has produced.  Every single potential enemy combatant is visually depicted with the accompanying stat blacks in the back of the book, too, which means this thing is 100% contained; no other D&D sourcebook necessary to run it!  Very cool. 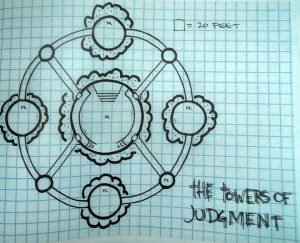 The maps are presented as if you’d drawn them yourself on some grid paper (complete with scale), which I thought was a fun twist.

Lastly, peppered throughout the book are shadow boxes that give all kinds of neat DM Tips to novices. They cover topics as elementary as how to present boxed text to PCs on up to how to adjust the challenge level of the module and have fun roleplaying NPCs. While a more seasoned DM will find most of them “old news,” several will still serve them equally well in the execution of this adventure.

Right out of the gate, your PCs will be tested in to serving Acquisitions Inc by Bambra Gallagher, an intern, with the promise of promotional opportunities dependent upon the execution of the mission (Here’s more on Acquisitions Incorporated). That mission is to infiltrate Olthanas’s flying cloud castle in secret and determine whether or not he is honest in his hope to pursue peace with the non-giant inhabitants of Faerûn. 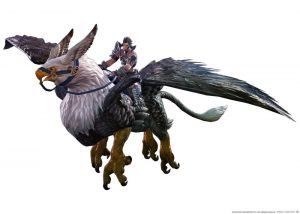 Your party will access the floating castle in one of two ways:

Either way, they’re tasked with avoiding the notice of any giants outside of Olthanas and his majordomo, Balakar.  Balakar is the one who petitioned Acquisitions Inc for their aid, but Bambra has her concerns that this might well be a trap.  The adventurers are charged with doing as much intelligence gathering as they can to try and ascertain their motives and integrity before engaging the cloud giants in any negotiations.

Will the cloud giants spring their trap, or is the offer of peace legitimate?

It was only by sheer force of will that I managed to read the Cloud Giant’s Bargain cover to cover without stopping to put in some DM prep work in anticipation of play. There are some really cool encounters and NPC roleplaying opportunities that I cannot wait to DM!  A couple of my favorites: 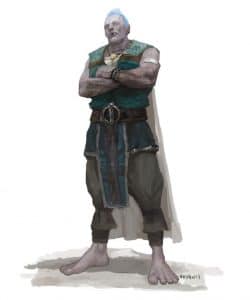 I’ve admittedly not gotten around to reading the adventure hooks presented inside Storm King’s Thunder, but I cannot imagine them being as imaginative and fun as that which Cloud Giant’s Bargain provides. The booklet even tells you where to appropriately resume the narrative inside SKT, so there’s no guess work or DM engineering required to transition smoothly and organically from this to that.

I cannot wait to run this adventure!  If you missed out on the Fathom event, you can find copies of Cloud Giant’s Bargain on eBay (we saw them for sale as soon as we left the theater!). I’ve heard mixed opinions on whether or not WotC will make it available as a free download in the future.