When we last saw (or heard about…?) our heroes:

LORC CHALLENGED KARGUKK TO A DUEL AND OMG THIS EPISODE COULDN’T GET HERE FAST ENOUGH!

With Grenseldek and Pappy Gutterunch vanquished, the fate of Redlake Fort is up in the air as Lorc confronts General Kargukk in a battle to the death! 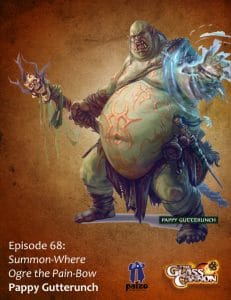