7 Ways to Fight With a Lightsaber

By Clave Jones On May 22, 2015 Last updated Nov 26, 2020
Share TwitterReddItPinterestFacebookEmailPrint

At this moment I’m completely obsessed with lightsabers. As my grandmammy would say, it would be easier to get a tick off a hound dog than it would be to get me to stop talking about lightsabers right now.

I’ve already written this and this about lightsabers, so I’ve mined the carbonite ore and licked the dust off my sleeves, yet I’m still obsessed with lightsabers.

You know why I’m obsessed with lightsabers? Because of stuff like a lightsaber technique specifically for slicing off an opponent’s hand, that’s why. It has a name and everything. It’s called Cho mai and is a precision technique that is considered honorable among those who follow the light side of the Force, as it allows for a victory by causing minimal physical damage. because, you know, it ‘unarms’ your opponent.

Wait, it gets better! There are actually 7 distinct forms of lightsaber combat and, because I can’t stop talking about lightsabers, I’m going to tell you about each one.

1. Shii-Cho: The Way of the Sarlacc

Shii-Cho is the First Form and is also known as the Determination Form. Pretty much every youngling is taught this form when first handed a lightsaber.

Shii-Cho focuses on simplistic – yet relentless – tactics. Shii-Cho was developed as force users began to take up lightsabers as means of melee combat, so its foundations are the basics of all sword fighting, like strike zones, parries and blocks. Shii-Cho teaches body movement, where to strike, while getting used to the feeling of the weapon.

Shii-Cho is a two handed form that relies on broad, deliberate, powerful sweeping motions and is often used for crowd control. Its wide, angular motions are ideal for dealing with groups, so it fits with a Jedi’s peacekeeping directive.

In A New Hope, when Obi-Wan has Luke training on the Millennium Falcon with a remote, Luke is learning Shii-Cho techniques.

2. Makashi: The Way of the Ysalamiri

Makashi in known as the Way of the Ysalamiri, which is appropriate because the Ysalamiri – furry, lizard-like tree-dwellers from the planet Myrkr – have the ability to nullify the Force. Using precision cuts, thrusts, parries, and feints, Makashi is meant to nullify another Force User.

Makashi is one handed, precise, subtle, and relies on wrist control, body movement, and back and forth footwork. Makashi is the duelist’s form and can be seen by Count Dooku in the movies, who uses clean movements instead of the flash and flourish in the fighting styles of his opponents.

3. Soresu: The Way of the Mynock

Soresu is Form III, the Resilience Form. Its design was based on defense from either ranged or melee attacks.

Soresu is in broad contrast to the first two forms. As the War between the Jedi and the Sith came to a close in the days of the Old Republic, so too did the need for lightsaber dueling. It was also during this time that blasters became wide-spread throughout the Galaxy, to which Makashi and Shii-Cho were not adept in dealing with. So Soresu, a wholly defensive form, was born.

Soresu relies on keeping the blade close to the body and using broad footwork to move around the playing field. Sweeping motions are kept short and never leave the main core of the body, protecting it as a shield. Soresu is the ultimate defensive Form: ranged attacks, melee attacks, single or multiple opponents, Soresu could adapt to all of these situations. A Soresu user only attacks when it is necessary, and only when the opponent provides an opening.

Soresu is the predominant form of Obi-Wan Kenobi. That Kenobi would use Soresu, which relies on patience and cunning
rather than brute strength and violence, tells you something not only of the mindset of Kenobi, but of the Jedi at their core.

Atari, Form IV, is also known as the Aggression Form. Its design is based around high energy tactics.

Jedi were tasked with being peacekeepers throughout the galaxy. While many favored Soresu to diffuse situations with as little bloodshed as possible, the Order realized that sometimes violence was the only answer, an example being the Mandalorians, a fierce warrior culture that served to be just as much a threat to the Jedi as the Sith before them. 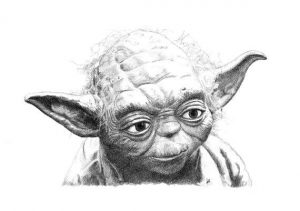 Developed after Soresu, Ataru is a kinetically active form which teaches a complete and total use of one’s body in the attack. It relies on speed, acrobatics and power. It is also the form that most heavily relies on the Force to augment these attributes.

This use of the Force with Ataru allowed an even playing field for force sensitives with potential disadvantages in combat, such as size, lack of mobility or age. The most prolific user of the Ataru is Grand Master Yoda, all two feet of him. Yoda’s version of Ataru requires high acrobatics and spinning in order to compensate for his short stature.

While Soresu was considered to be the most commonly used of the seven forms, Ataru is the one we most commonly see in the films, largely because we are watching Jedi in aggressive, attacking situations.

5. Shien/Djem So: The Way of the Krayt Dragon

The Fifth Form, or Perseverance Form, is in fact two forms: Shien and Djem So. Their design is based on manipulating an opponent’s attack.

The Krayt Dragon was a fierce and powerful reptile that was native to the desert planet of Tatooine, which is significant because Form V is most associated with The Skywalkers. Anakin would use Form V as his base form while adding other forms into the mix. Luke instinctively mirrored his father’s form.

Shien was the first of the two to be developed and was in direct response to Soresu as some Jedi felt that the Absolute Defense
mentality of Soresu prolonged battle. Instead of deflecting blaster rounds with the blade for simple protection, Shien focused on redirecting the blaster round back to the attacker. Instead of waiting for an opening, Form V created the opening.

It’s counterpart, Djem So, focuses primarily on saber dueling, and like Shien, focuses on redirecting and countering an opponent’s attack. So what is the difference between Shien and Djem So? In short, Shien is made for blasters and Djem So for lightsabers and was created by mixing Makashi and Soresu.

6. Niman: The Way of the Rancor

The Sixth Form, Niman, is also known as The Moderation or Diplomat’s Form. Its design is a conglomeration of the preceding Forms.

Niman’s main distinction is that it tries to combine the tactics and sword work of the older forms, blending these forms down into a uniform style.

But it would best be considered a more philosophical form, being that Niman relies more on the mentality of the user instead of the weapon in his hand. Users are described as being a leaf in the wind, riding the currents of the Force. Practitioners of Niman are calm and collected, reacting only when necessary.

By the end of the Old Republic, although few could master it, Niman had become the preferred form of the Jedi, who were expected to be diplomats and ambassadors, not combatants.

It is not, by any means, an easy form. Students have to learn at least four of the last five forms, understanding them and their applications. Then they must learn the serene philosophy and discipline of Niman. You master several forms, then master the concept of Niman.

Form VII is also known as the Ferocity Form. Its design is based on pure attack, no defense.

Like Form V, Form VII is split into two parts, Juyo and Vaapad.

The history of Juyo is hard to place. It first appeared around the time when the Jedi and Sith were in a state of civil war
amongst each other. Each move was a bold, direct form of attack, leaving no space for defense. Although it is not acrobatically inclined, it is a kinetic form, requiring a constant state of movement. Its main strength came from the user relying on a well of
emotion, almost to the point where came to enjoy the combat.

Eventually, the Jedi Order restricted the teachings of Juyo, with only the highest ranked Masters being able to study it, leaving Juyo to be the perfect philosophy for the Sith, whose main tenets were to give into desire and anger to relish in the combat. Juyo was exemplified by Darth Maul.

Vaapad, closely related to Juyo, is the youngest of the Seven Forms, having been developed by Mace Windu in the last few decades of the Old Republic. I’ve written a full write up of Vaapad here.

“This is the weapon of a Jedi Knight. Not as random or as clumsy as a blaster, but an elegant weapon for a more civilized age.” -Obi-Wan Kenobi

Rage of Demons: What do Neverwinter Releases tell us about Future D&D 5e Storylines?