We Don’t Need Another Fantastic 4 Reboot

By Nash On May 29, 2015 Last updated Nov 28, 2020
Share TwitterReddItPinterestFacebookEmailPrint

Unlike the other Earth Nerds, I didn’t grow up reading many comic books, although I do have plenty of familiarity with the Marvel Universe through collecting the trading cards. 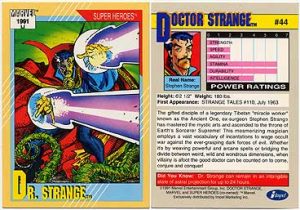 Yes, there are comic trading cards just like baseball cards.  Well, there were when I was growing up anyway.  And my personal favorites were series 2, although not all were magnificently mustached like the one on the right.

So while I don’t always know what is going to happen in particular comic storylines, I do have a great affinity to the individual characters.  Which sometimes means I can enjoy the movie adaptations even more than most hardcore comic readers.

Nerds on Earth recently published a piece on why we don’t need more origin stories and I couldn’t agree more!  If you haven’t read it, do so! I’ll wait.

That piece really hits the nail on the head, mainly that good story telling doesn’t always have to start from the beginning.  Personally, I’d love to never see another reboot, which brings me to the point of this article: I’m skeptical about the Fantastic 4 opening this summer. [View the trailer here.]

Growing up, the Fantastic 4 were one of my favorite groups of super heroes, but when it comes to the new reboot, I am a little ambivalent, because, well, we were already introduced to them just 10 years ago. 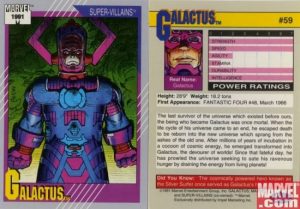 I know that a lot of people out there would like any chance to forget the recent run of 2 films, but after the first reboot trailer came out, I happened to catch the earlier film, Fantastic 4: The Rise of the Silver Surfer, on TV.  To be honest, I don’t think it was nearly as bad as people made it out to be, and truth be told, I thoroughly enjoyed the first one.  Sure, the second movie takes a dump on TERRIFIC characters such as the Silver Surfer and Galactus, but I still thought it was perfectly cast to the extent that at first I wasn’t even on board with Chris Evans playing Captain America, being that I liked him so much as the Human Torch.

However, I now support Evans as the star spangled Avenger even though I still think he played the part of Jonny Storm perfectly, as did the rest of the cast.

At first glance of this new cast, I like the actors they have chosen.  Michael B. Jordan won me over in Friday Night Lights, and they have the kid from Whiplash and the girl from Shooter.  But I just can’t fully get there.  Ultimately, I don’t think they fit the character profiles that I think of when I think of the Fantastic 4.  (I also see this playing out like the reboot of Spider-man, which I thought was a train wreck.

I personally think that casting is an integral part in these movies.  At times producers forget that they are casting the secret identity, not the superhero themselves.  Toby McGuire was a perfect Peter Parker.  Once the mask is on, let CGI and voice over take its course. Michael Keaton was my favorite Batman (who yes, isn’t a superhero as he is an action hero—but that is a post for another day).  And there may never be a better Clark Kent than Christopher Reeve, and certainly not a better Lex Luther than Gene Hackman.

Casting is key.  And from the looks of the new Fantastic 4, this post is too little too late.

They are also going to give us a different origin story, like the Amazing Spiderman just did and Michael wanted to do with the latest TMNT—thank goodness for the internet outrage.  Like I said, I am not as familiar with the actual origin stories used in the comics, but I certainly don’t want to sit through another 35 minutes of anything like that during this new movie.  I mean, how many different actors have played Bond over the years?  They don’t do a whole new thread each time they cast a new Bond. 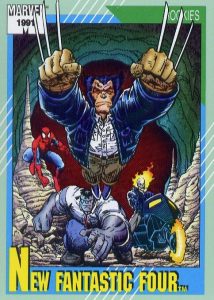 My thinking is this: if you are going through the trouble of rebooting the Fantastic 4, including creating alternative origins and new takes on the characters, why not just go all in with a New Fantastic 4? Take a look at my trading card to the right. Now, THAT is a reboot of the Fantastic 4.

That would have at least been something new, they could have undone the damage Nicolas Cage did on Ghost Rider and a casual comic movie goers probably have zero idea there even was a new Fantastic 4 assembled.

So while I will end up watching the Fantastic 4 reboot at some point, it’s certainly not an opening weekend fare for me.  I think it is time to expand the universe in the right way—we don’t need 2 or 3 storylines of the same characters, we need better story telling of the ones we have and more opportunity for crossover movies like we will eventually get with Avengers and Guardians of the Galaxy.  I’d love to see a Fantastic 4 vs X-Men at some point, just not as a third Fantastic 4 reboot or ESPECIALLY not another focus on Wolverine saga.

Dungeons and Dragons: I Wouldn’t Touch This Post With a Ten Foot Pole