We’ve made no bones about how we loved the first season of Daredevil since it dropped on Netflix. As the Marvel Universe took a look into the grittier, darker side of what is happening, it was amazing storytelling and was very Marvel and very dark, which are two things that are hard to manage. (It is so much easier to be DC, where the mantra is no jokes and Christopher Nolan wants to shout “Why don’t you understand that storytelling is what made my movie good, not just dark filters on everything?!?!”)

But I digress…so let’s get to the point: Daredevil needs to fight some ninjas. 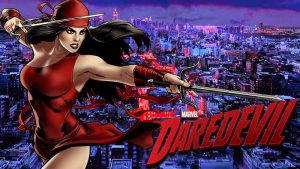 I am hoping that it will work out but in the meantime here is the suggestion: focus on The Hand.

If you are new to Daredevil, you may not realize that one of the iconic villains that is in his rogue’s gallery is the ninja group The Hand.  The Hand is an ancient warrior group that has a long, convoluted backstory, which they should because they are ninjas.

The Hand’s interaction with Daredevil comes from his relationship with Elektra. They were college friends/lovers/whatever the kids are calling it these days. She eventually was involved in the group as an assassin.

So, how do the Hand show up in the series? The comics lay out a pretty direct line that makes sense if they follow it. In essence, Wilson Fisk is captured at the end of the series, or at least there is an attempt. Daredevil has managed to subdue him. But Fisk isn’t a guy who is going to quietly go away and take his lumps.

So Fisk reaches out to get help in both taking on Daredevil and in making his escape. (Imagine, season 2 opening shot: ninjas clandestinely storm the prison and escape with Fisk!) And in this new partnership with the Hand, he gains their head assassin Elektra, and that is much of the emotional toil and angst of season 2, along with Karen Page’s inevitable tumble into darkness, which they set up very nicely in season 1’s last episodes. 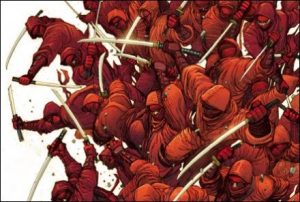 The Hand are great Daredevil villains, especially for the TV show. One of the things that people loved about the series were the iconic hand to hand fights. I mean, Daredevil and ninjas in fisticuffs fits this series beautifully. The dark tone they have used for the series begs for dark, sneaky ninjas creeping around. The underground connections with the Orient have already been established. The television version of Stick could easily have ties to the Hand clan.

The temptation of the showrunners may be to not lean all the way into the ninjas but I think it is a mistake.  You want to make season 2 of Daredevil epic? The Hand shows up in all their ninja glory!

Comic Characters You Should Know: Psylocke