It was a dark and stormy night. You and five other people are in the entrance hall of an old and majestic mansion. How you got there, you don’t know. You know a little of the people you are with but not enough to call them friends. In fact, two of them are kids, not even over nine years old.

The house is creepy. Doors are closed and noises echo through the halls. Someone, probably Ox, suggests splitting up. That makes no sense. No one knows what is going on. There could be anything in this house. Or anyone.

As you open the door to your right, one thought crosses your mind. “This feels like some campy horror movie.”

Review of Betrayal at House on the Hill

And, in a way, it is. You are playing one of the best board games for three to six players. Betrayal at House on the Hill was actually one of my first true board games I played as an adult. And I was blown away.

You are given a character with strengths and weaknesses. Your character may be very smart but pretty weak in the might category. I usually choose Jenny LeClerc, a young woman whose character figure looks like Lara Croft. So, naturally I gravitate towards her. One of my friends always manages to be Ox, a very strong, not too smart guy.

Once the characters are chosen, the game begins. All the characters start in the entrance hall. And you build the house as you explore. Moving one space means you walk through a door and place a room tile down. And entering a room means you trigger an event. Most of the time, the events are creepy.

You see a couple of skeletons clutched together in the corner…

Blood starts dripping down the walls…

A horrible howl echoes through the house…

This house…might be haunted. Or cursed. Or just plain spooky.

One or the other.

Sometimes an event can give you an item. Which will usually help you in the future. It could be an ax, a revolver, some armor, even some dark dice that will allow you a special ability. Items are always good. And you want to hold onto them.

This games isn’t just about exploring a spooky house. That would be too easy. 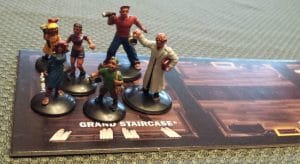 Sometimes, the player must pull an omen. Which makes the other players groan each time that comes up. Omens are usually items that help you as well. You could find a dog that will run ahead of you to pick up items. It could be a little ghost girl that helps you. It might even be a magical spear, pulsing with power. But the thing with omens is once it is drawn, there is a chance that the haunt will begin.

And the haunt is just as it sounds. Something really messed up happens.

Once an omen is drawn, the dice must be rolled. If the number rolled is less than the number of omens in play, watch out. The haunt has begun.

“But Jennifer,” you may be thinking. “What is this haunt you are speaking of?”

Imagine you are in a house like this. The party has been split (Thanks, Ox). You are alone, carrying an old revolver and a mask that could help you but will also drive you crazy. Suddenly, Professor Longfellow runs into the room you are in.

“Ox has gone crazy! He has awakened a monster!”

That’s right, readers! There is a traitor. And it is determined by the haunt that is triggered. And there are fifty different haunts that could happen. And the traitor is different every time. Ah!

I’ve played this game many, many times. And I have never played the same haunt.

But things get real very fast. There are two books: one for the traitor and one for the other players. The traitor leaves the room and reads what their goal is. And then…the real fun begins.

The traitor has a certain goal to reach (usually to kill everyone else) while the other players are usually just trying to stay alive long enough to escape the house or kill the traitor/monster that is now after them.

Usually when this starts, everyone is in different rooms. And it is a race to get back together before something happens.

I’ve also been the traitor. Many times.

So, I’ve killed before. Horribly.

Once, my goal was to marry the corpse bride. I had to get to the chapel before the others. I announced when the wedding began. One of my friends playing was very distressed about this.

“No! The wedding has begun!” she exclaimed. We had to pause the game to laugh at her.

By the way, I won that game. I got my bride.

I can’t decide if I enjoy being the traitor more or not. I love the co-op element of the game so much. But I’m a huge co-op fan in general.

We are planning a game on Halloween night. Because, why not? It’s perfect. Be a group of friends exploring a creepy old house. What could possibly go wrong?

Now, imagine yourself back in that house. Imagine finally killing the traitor. Who would have guessed that Ox had that secret agenda all along? You and the three other survivors (Poor, Professor) stumble out of the house and into the misty morning air. You survived the night, barely. Your hand is still clutching the revolver even though you are safe.

That’s the last time you step foot into a creepy house on a hill.

Or so you think…

Thanks for reading Nerds on Earth. You can check out Betrayal at House on the Hill via Amazon. Please do us a solid and help us spread the word by using the social media buttons located around the site.