One of the absolute best shows ever to the grace television screens was Firefly. Duh.

But having watched the Firefly series in its entirety, then watching the movie Serenity right after should have given me all the closure that the world, right?  WRONG!  We live in a world with more than 800 episodes of Dr. Who, but we only got 14 episodes and a movie of Firefly?!? That won’t do.

Thankfully though, Firefly lives on. It lives on not just in the fairly decent fan fiction that you can read here or here (They’re trying their best, people!), in comics, in board games and in RPGs. Firefly also lives on in our hearts.

If you have seen this show you know exactly what I am talking about; if you haven’t, what’s wrong with you?! In fact, I have read through all of the Nerds on Earth posts about Firefly. 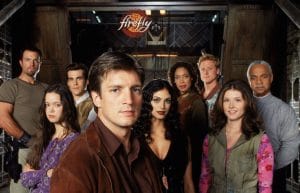 I especially liked the Nerd showdown between Malcom Reynolds and Peter Quill. That article just nailed how Mal is the man. Don’t get me wrong, I love Star-Lord. I mean L-O-V-E love him. I have pieced together my Star-Lord outfit for Halloween and the occasional cosplay, but truth be told, I’d ditch it all and go as Mal any day of the week.

“Mal [like Rick] is more like a benevolent dictator: His crew can speak up, but he always has the final say. It is his boat [prison], after all. Occasionally, he has to lead from a place of authority, when his crew strongly disagrees with his decisions [taking the prison, banishing Carol, etc.]. But more often Mal Rick leads from a place of permission. His crew willingly follows him on a mission that would almost certainly end in their collective deaths to Miranda and later to Mr. Universe’s base of operations [everyone in Alexandria].”

But that’s not the only example. Besides Guardians of the Galaxy, there is Interstellar or the reboots of the Star Trek series. Our present revitalized infatuation with both strong characterization and space exploration would have been served well, oh I don’t know, WHEN FIREFLY THE BEST SPACE EXPLORATION SHOW EVER WAS ON TELEVISON!!!!

But this is turning into a rant, and it’s true, us Browncoats just can’t let go.  So while I don’t dabble in fan fiction, Firefly certainly lives on in my imagination and I want to do my small part in keeping it alive. Which got me thinking…

“Gosh, I wish there were Firefly Legos.” 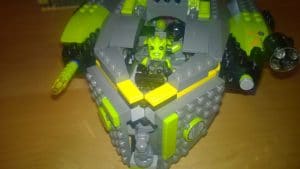 Here is one of my favorite Lego creations. It isn’t exactly an original as I used the instructions for my Milano to serve as a framework. but I did customize it a bit and I named it the Scav 2,  building out of parts from bulk random Legos I purchased on Ebay.

The Scavenger 2—Scav 2 for short—is everything I miss about Firefly, but in Lego form and with some personal panache. It is built for deep space travel, holding cargo (concealed if need be), and most importantly, it can make a quick getaway. The ship captain, alien Kil Feget, is also much like Mal and Star-lord: 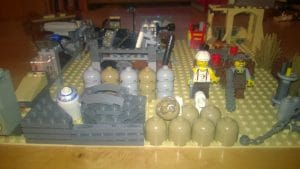 Kil has a few mates from his war days, they explore deep space together, and spoiler alert y’all, they eventually both die. The crew also frequents a junk yard owned by two of the gruffest brothers that the deep space harbors, Lake and Jude Nelson. These guys can fix anything, you just have to put up with their less than sunny dispositions.

Shoot, perhaps I do dabble in fan fiction. Anyway, while we all miss Firefly, I also think maybe we are blessed in another way: We never saw this great show suck.

Even the best shows of all time had some sort of let down during their runs. But not Firefly. For 14 glorious and perfect TV episodes and one solid feature film, it did not suck. For that, us Browncoats can be forever grateful. And we can do our part to add to the mythos.