After last week’s cattle herding adventure went sideways, presumedly at the expense of Glenn, The Walking Dead slows down with episode 604: Here’s Not Here. Finally, we get to see the story of what led to Morgan’s change of behavior.

The Walking Dead episode 604 opens with Morgan talking to someone and trying to explain his past, presumably one of the people who tried to take him down last season around the fire. What we see is Morgan having a bit of a mental break down in the room we last saw him in long ago before his return at the end of last season as a bo staff wielding ninja.

Then we see Morgan outside, using the blunt end of a rifle to kill zombies, dragging their bodies together, burning them and repeating it in a cycle. It is livened up when one of the zombies comes through the fire.

Next, Morgan fairly viciously kills two men who appeared to be stalking him in the woods. As time passes, we see Morgan build out his defenses, including spike walls. Eventually, we see him standing in a flower field and hearing a goat, that when he tracks it down is at some cabin in the woods.

When Morgan comes through, he is locked in a cell. And when the man near, Morgan yells at him repeatedly to kill him. The man tells him his name is Eastman and drops the book “The Art of Peace” in his cell before taking out a zombie with a bo staff that was threatening his goat. 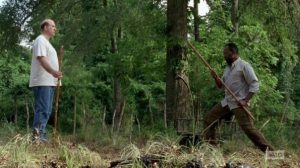 Eastman asks for mercy for the goat, leaving it in the same room as Morgan. Eastman is then shown practicing his bo staff skills, failing to make cheese from the goat and repeating the process.

Eastman turns out to be a forensic psychiatrist, formerly of Atlanta. Morgan talks about the need to clear anything that is near him and Eastman calls him on his “purpose”, while serving him lunch. Eastman diagnoses Morgan as being a survivor of PTSD and Morgan confesses his murder of the two men from earlier.

Eastman talks about how Morgan is reliving his traumatic moments over and over and can’t escape. Eastman talks about his interviewing the damaged people and how he wants to help Morgan. It turns out Morgan’s cell has been open awhile and he gives him the ability to stay or go on his own.

After a failed attempt to take down Eastman, Morgan again asks for his own death but Eastman says he only really has two choices: the door or the couch. Morgan walks about into his cell, shutting the door behind him.

Eastman talks about discovering Aikido, how it helped him overcome. He discovered Aikido after his daughter saw him in the midst of a breakdown and gave him a lucky rabbit’s foot. Morgan theorizes that Eastman lost his own wife and child that Eastman had shared about. When Morgan walks out at night, he sees the artwork that Eastman was repairing that was broken while they were fighting.

When Eastman leaves the next day, Morgan has to defend Tabitha – the goat – and in the midst of his taking down two zombies, he appears to have a bit of an epiphany. He drags the dead zombies through a field, before discovering a pretty significant graveyard. Eastman comes up and pulls the IDs off the bodies, and gives the graves names. Eastman then gives him his spear back, minus the pointed end that Morgan has been using earlier. 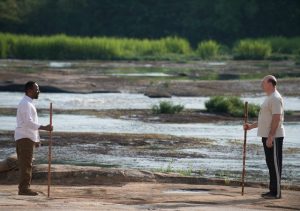 Eastman then becomes the master, teaching Morgan about the redirection of energy and about the valuing of your opponent’s life. As we watch, we get a montage of the life, the training and the philosophy of Aikido read between the two men.

Later, Morgan asks about the cell in his house and Eastman details an interview with a psychopath named Creighton and how when Eastman figured out Creighton was evil, he attacked Eastman who ultimately used his Aikido to save himself. Creighton Dallas Wilton then escaped and killed Eastman’s family in an attempt to destroy Eastman’s life. And Eastman built the cell for Creighton but ultimately didn’t use it, because Eastman came to believe that all life is precious.

Morgan leads Eastman back to his old hangout to get gear and Eastman asks Morgan about who he lost. Morgan has a moment as he talks about Jenny and Dwayne. When he starts to shut off, Eastman makes him get in some bo staff practice. And in the midst of practice, Morgan freezes because the zombie is of the man who he strangled. 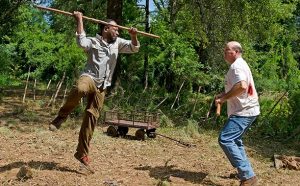 Morgan then sharpens the spear and kills a zombie, when a couple is freaked out by him, offering him food and a bullet. He runs back and discovers the goat is dead, and helps Eastman bury the bodies. But as he is burying him, Eastman reveals that he kidnapped the man who killed his family and brought him to the cabins, put him in that cell and let him starve to death over the course of 47 days.

Eastman confesses to being destroyed because the act didn’t give him any peace and that his only peace came when he decided not to kill anything again. Eastman only discovered the world was falling apart when he went back to Atlanta to turn himself in.

He later reveals to Morgan he has a gun and will use it on himself but encourages Morgan to leave this place to find others. And as Morgan helps him to his grave, he gives him the lucky rabbit’s foot. Later, as he is leaving, we see Eastman’s grave.

The episode ends in current time, and we see the wolf that Morgan has been sharing this story with, who just outright rejects Morgan and his hope for change, saying his code will be killing everything and everyone, including children. Morgan leaves him tied up in an unfinished house, locking the door before running away at the end.

This episode essentially worked as a two man drama and after the hectic pace of the last few episodes, it serves as a tremendous deep breath and a kind of pause. What we see helps us better understand Morgan and some of his (infuriating) recent behavior. And it is a compelling story.

Eastman is a great character and story to drop in the middle of the Walking Dead world and how that serves to bring Morgan back to walking the tracks towards Terminus, where we encountered him again last season. But it also doesn’t push the story dramatically forward except for the piece at the end where we essentially learn The Wolves are bad news.

8.5 out of 10 nerds. It was well done and a compelling hour and half of television but the audience is also at the point where the story needs to get moved forward very rapidly and not in such a divided way. It has been an interesting story but it is time for us to see some real motion.