The Walking Dead Episode 603 Recap and Review: Thank You

After last week’s birth of Ninja Carol, can The Walking Dead maintain its momentum with episode 603: Thank You? And will our Walking Dead season 6 episode-by-episode predictions turn out to be accurate?

We open and we see a small group of people moving away from the herd and towards Alexandria. And spoiler alert: most of these folks are dead by episode end.

In fact, one gets all sassy mouth about Rick and he dies pretty quick, with Rick stripping the body pretty quickly in a way that is both shocking and makes sense. In the midst, Rick has a conversation with Michonne and Glenn, in essence saying “When the time comes, save yourselves because the folks aren’t going to survive in this world very long.”

Heath overhears it and isn’t on Team Rick. At all.

Glenn, Michonne and Heath go to work when the next way attacks but we see quickly that Rick was right. One gets bitten. Another guy shots a member of their own party and then runs away and Nicholas sort of freezes up.

Meanwhile, Daryl decides to ride off away from Abraham and Sasha, in a weirdly unresolved plotline. Eventually Daryl comes back and I am sure there is supposed to be a symbolism but it just felt like he drove off, got some space, took a whiz, waited ’til it felt real good, then headed back. Anyone got any other ideas on what was going on with Daryl?

Michonne then gets to hear the now bitten guy’s story. His new wife was his first new friend after he came out of a place where he says “I gave up on being a person” which Michonne definitely understands. He wants Michonne to tell his wife but she says he will get to tell her.

When the group gets to town, they see a few things. One, Sturgis, the bad shot from earlier is now zombie food. Nicholas is supposed to be leading the way but freezes before getting the team to the pet store. They decide the best way out is to burn a building and Glenn decides to go with Nicholas leading the way.

Meanwhile, Rick takes down some zombies but when his knife breaks, he injures his hand and nurses it until he gets back to the RV, in a sweaty running montage that is the best we have seen since The Last of the Mohicans.

Heath and Michonne have a heated discussion when she makes it clear that the earlier conversation is about survival. Annie says they should leave her behind, but they refuse. Nicholas finds body of a person he knew, a kid who was in a raiding party that he abandoned. After he gets a pep talk from Glenn, he put the zombie down.

Gunfire draws away zombies and they are quietly waiting it out in the pet shop. The wounded guy writes a letter to his wife but Michonne writes on her arm “You are getting home”. Michonne then kills two zombies in the pet shop but it draws the horde. When they try and make a break for it, Annie is eaten, despite her persistent belief that the sun would come out tomorrow. 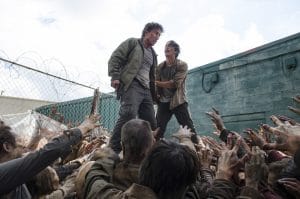 Glenn and Nicholas discover the feed store was already burned and in the midst of running, they get stuck. Nicholas goes off the deep end and while he and Glenn are on a dumpster, Nicholas tells Glenn “Thank you” and then blows his own head off, putting him and Glenn on the ground and Glenn then gets devoured by zombies.

Meanwhile, Heath, wounded guy and Michonne are escaping, as they have to leave the bitten guy behind. Heath suddenly sees Michonne’s point. Later when the only three survivors from the party are together, Heath gets a bloody look of himself in a dirty creek water.

Rick has made it to the RV and he gives a pep talk to Daryl, who is done and headed to back to Abraham and Sasha. Then two wolves attack him and learn that if you are going to come at Rick, you need more than a couple guys. Rick kills them both, then after seeing a jar of baby food, he flips and shoots up the side of the RV, killing more Wolves who were trying to sneak up from outside.

Then, as the horde comes at him, he can’t get the RV cranked. 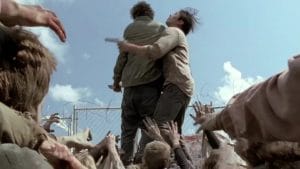