So most everyone knows about Buffy the Vampire Slayer, from the late 80s movie and its campiness to the television show that ran 7 seasons on the WB and CW networks. And in case you didn’t know it, the series and world has long had comics, both telling other stories but also expanding the universe of slayers, vampires, watchers and more. 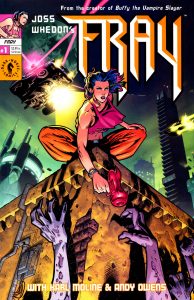 One of the more unusual candidates in the comic realm is the series Fray. Penned by Joss Whedon and drawn by Karl Moline, Fray is set in a far distant future and is basically the story of the first Slayer to be called in a long time; Melaka “Mel” Fray is a 19 year old thief who suddenly is called to be the Slayer and take on the lurks, which has become what vampires are known as. In the interest of not spoiling a really compelling story, I am just going to give a general overview of the series and encourage you to check it out.

Fray should be more well known. Written and published between 2001-2003, Fray is a work well before its time but in some ways, it would fit in well in today’s pop culture.  For instance, Fray is set in a dystopian New York City in the future, where the gap between rich and poor is even wider. While everything is dystopian nowadays, this book was well out in the front of all that. And if you are big into Joss Whedon, you see some of the cultural issues that become more prominent in Dollhouse start to be worked out in story here.

Second, if you are in any way a fan of Buffy, it is interesting to see Whedon take the story and twist it slightly without breaking it. All of the established rules and tropes of the Buffyverse are in this book but not slavishly so. As the creator of it all, Whedon has the ability to make it new but also the same. It is important to note that in some ways, Fray is a companion to season 7 of the television show. Released in roughly the same time, you see references in the show to the comic and vice versa. Neither one suffers as a stand alone piece but both work well together. 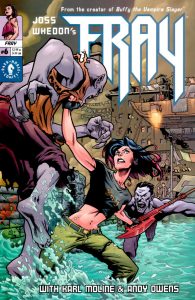 But even if you are not a massive Buffy fan, the story is compelling enough to draw you in. Fray’s story and background and the supporting characters are all fantastic, as one would expect from Joss Whedon. A master of dialogue, this story is no exception and is good, solid storytelling. Karl Moline’s art is also great, adding to the creation of a visual world of the future that is easy enough to believe and buy into in the needed level to make the story work.

Fray is definitely worth checking out as a standalone piece or as a work to complete your encyclopedic knowledge of all things Buffy. Especially because the world and character seem to be one of Joss Whedon’s favorites, as he and Moline revisit the world of Fray in Buffy season 8 comics and in other one off stories. Personally, I am hoping he will take his millions of Marvel money and make a Fray television project for Netflix or Amazon.

You can get the collected edition of Fray on Amazon and the digital version was recently released on Comixology.

Fray gets a solid 9 out of 10, with me withholding one point because I just wish there was more of it.