Whether it’s Barry Allen reading comics about Jay Garrick or Grant Morrison writing himself into the pages of Animal Man, writers have been finding ways to write comics about comics for years. Sometimes it’s part of a joke–other times, the creators have something to say about the medium itself. Either way, these seven comics are some of the best examples of metafiction in comics.

The Best Comics About Comics 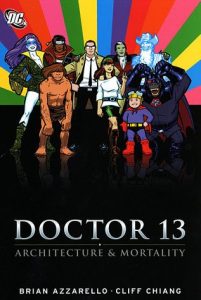 Apparently, Brian Azzarello wasn’t too happy about not getting to be a part of DC’s weekly 52 event, because he wrote this comic, which features Grant Morrison, Mark Waid, Geoff Johns, and Greg Rucka as cosmic threats trying to destroy the multiverse. Azzarello and Chiang dig up the characters that have been ignored over the years; the corny, the crazy, and the weird. That means French cavemen, Nazi gorillas, haunted tanks, and vampires.

Architecture and Morality follows Doctor Terry Thirteen (notable for being a hardline skeptic in a world where magic is demonstrably real) and his daughter on a dreamlike journey through the backalleys of DC’s lost continuity–specifically, the characters that just don’t fit in as part of the post-52 universe.

It’s a lament for the goofy characters that made comics so exciting years ago, the ones that “have no place” in modern storytelling. If you think modern comics are too dark, well, apparently Brian Azzarello agrees with you–give Architecture and Morality a look. 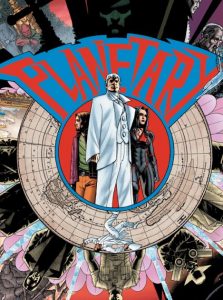 Planetary is Warren Ellis’ second-best creation, and it is nothing less than a complete history of comic books and their relationship to popular culture, from radio dramas to John Woo movies. It’s the story of three surly superpowered detectives uncovering the secret history of the world, one filled with masked pulp heroes, giant monsters, and ’50s sci-fi movies.

Every chapter in Planetary is another story about something that shaped modern comics. The characters interact with Tarzan and Sherlock Holmes; they attend John Constantine’s funeral and meet all  the 80s “British Invasion” characters, from Swamp Thing to Miracleman; there’s even a scene in which an evil analogue of the Fantastic Four murders the old pulp heroes, including Doc Savage, the Spider, and Fu Manchu (representing, of course, the decline of the pulps in the face of competition by the bright, four-color comics ushered in by Stan Lee and Jack Kirby).

Planetary is thoughtful and almost gentle in the way it peels back the layers of history surrounding the comics we love. It makes no judgment on the path they’ve taken. It merely catalogs and illustrates the crazy world comics have built over the last century. As they say in the book, “It’s a strange world. Let’s keep it that way.” 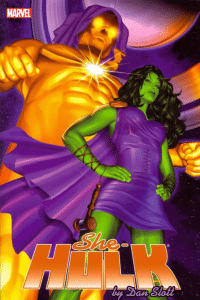 My last article led to a binge of Dan Slott’s run on She-Hulk from the mid ’00s, and I was reminded of how smart and funny they were. The stories make a conscious attempt to focus on Jen Walters, attorney-at-law, and not She-Hulk, member of the Avengers–but seeing as her law firm specializes in superhuman cases, there’s often a bit of overlap.

The thing about law, superhuman or otherwise, is that you need a whole lot of legal precedents. Those can be hard to come by when one of your plaintiffs is Galactus or something. Dan Slott’s solution for this is a stroke of genius: Marvel Comics exist in the Marvel Universe, as licensed stories approved by the Avengers and the Fantastic Four, right? Boom, official legal documents.

Jen and the crew spend almost as much time browsing through longboxes as they do saving the world, and that leads to some wonderful interactions about comics. Whether we love something or hate it, comic fans tend to be a vocal bunch, and a lot of them get a chance to say their piece in the pages of She-Hulk. 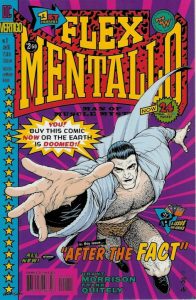 Grant Morrison has made a career out of metafiction–The Invisibles, Animal Man, Final Crisis, and the recent Multiversity are all sufficiently mind-melting to earn a spot on this list, but Flex Mentallo is still the only one that I’d be willing to use in a discussion on linguistic theory.

Describing Flex Mentallo is slippery, subjective, and more than a little dangerous, so I’ll just say it’s about a dying junkie’s last moments, in which he dreams that Charles Atlas is following the Question through the history of comic books, while at the same time a detective teams up with Grant Morrison in a leotard to uncover a mastermind with a moon on his head.

It’s a lot more straightforward than it sounds.

In all seriousness, Flex Mentallo is, at it’s core, a lament about how dark and serious comics have become. It’s a comic that longs for the days of heroism, bright lights, and ultimate good deeds. It’s also a rejection of the Watchmen syndrome, the idea that comics need sex and violence to be compelling–FM demonstrates how that thinking is smothering comics and killing our heroes. And if you happen to be interested in listening to a ten-minute lecture about how it’s also about Structuralism, hit me up. 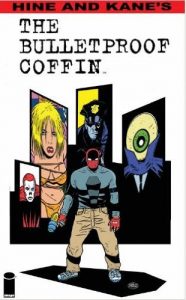 Hine and Kane’s Bulletproof Coffin is what comics used to be–violent, gaudy, grimy, creepy, and unsettling. It’s also…I don’t want to say “incomprehensible,” but I will say that it would require an extra thousand words, two flowcharts, and at least one heavily medicated macaque to adequately explain what happens.

Here’s part of it: Bulletproof Coffin is a comic by David Hine and Shaky Kane (also known as DESTROYOVSKI) about comic book characters like the Coffin Fly, the Hateful Dead, and Ramona, Queen of the Stone Age, who were all created by two fictional people named David Hine and Shaky Kane. Here’s another part: Steve is being followed by Men In Black, and he isn’t sure if the two creatures living in his house are his children. And it just goes more nuts from there.

Once you strip away the comics-within-the-comic, and the advertisements-within-the-comics-within-the-comic, you get a story about ownership and the threat of corporate interests overwhelming creative control. It tries to tell stories about the kind of stories comics can tell, and the sequel, which features an issue inspired by the act of destroying a copy of Fantastic Four #2, goes even farther by trying to push the limits of what can be done on the comic page.

It’s not an easy book, but it’s never boring. 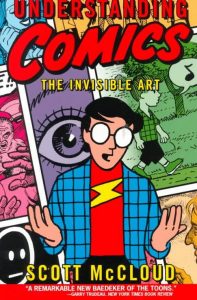 Understanding Comics is unquestionably the best text for introducing yourself to the medium–even if you’ve read comics for years, there is still plenty to learn. There’s no real mind-bending here, and no mental gymnastics are required, but I think I’ve cracked open this book more times than any of the other entries on this list.

Scott McCloud’s Understanding Comics has a simple premise: a comic book that teaches you about comic books. If you’ve ever wondered how writers and artists in comics do what they do, or, more importantly, why, McCloud will tell you. If you want to develop the vocabulary you need to discuss comics, it’s an invaluable toolbox. It’s not a story about comics–it’s more textbook than narrative–but it is the best comic about comics. 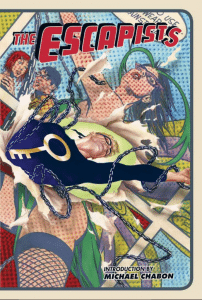 I am an unapologetic Brian K. Vaughan junkie. Ex Machina and Y: The Last Man are two of my favorite works of fiction in any medium. I think Saga is a masterpiece. My biggest day-to-day dilemma is deciding whether to pick up Paper Girls in singles or wait for a handsome hardcover. And I still think The Escapists is the best work he’s ever done.

Spinning off from Michael Chabon’s Pulitzer Prize-winning The Amazing Adventures of Kavalier and Clay (which is also about comics, and also worth your time), The Escapists tells the story of a trio of friends who decide to write a comic book based on a Golden Age hero. Against all odds, they actually start to succeed, and their character is used to mirror their rise and eventual fall.

It’s a heartfelt, occasionally sad, and incredibly true story about the creative process. It captures the joy of inventing something new, the struggle with creative compromise, the triumph of originality, and the disappointment of failure in one, clean package. If you’ve ever written a story, or drawn a picture, or even had that one beautiful idea that you just know is going to change the world–The Escapists will be indispensable.