Trending Anime: Why You Should Watch One Punch Man

Anime has the many stages of weird but intriguing. The deep strange, the fluffy strange, and the funny strange. Sometimes I switch over to anime when I finish intense TV shows to fill the void with either light-hearted animation or just cute fluffiness, or both.

Stumbling upon the anime series, One Punch Man, was probably the best random series binge choice I’ve made this year so far. Unfortunately the show only ran for 12 episodes, however the webcomic released 105 chapters.

To all the anime newbies who love great animation and also well written dialogue, watch One Punch Man right now. Below are some reasons why.

[divider] The Plot of One Punch Man [/divider] 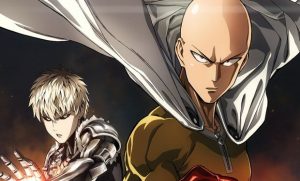 Of course the typical story of super heroes starts with an average person involved in a crazy incident that changes the course of their life. The anime starts off with that concept as well, but makes it different and engaging.

The main character, Saitama, starts off as some businessman casually thinking of ending his existence, who then got the strange urge to save a child’s life from a weird monster. After that incident, Saitama’s life had changed, as in losing his hair and becoming ridiculously invincible.

Expectations of what a superhero will or should act like can be similar amongst many, but with Saitama, never did I expect him to a superhero bored with being so powerful. He’s known as the man who can kill the mysterious monsters and villains that pop up in City Z with one punch.

He grows tired of never having a true challenging fight. But when he is introduced to a cyborg named Genos, who wants Saitama to train him to be a powerful hero like him, Saitama, not exactly by choices, takes him under his wings. With crazy monsters, city full of oblivious, and now a new disciple to train, Saitama finds his challenges in the smaller things like maintaining his humility towards humanity. 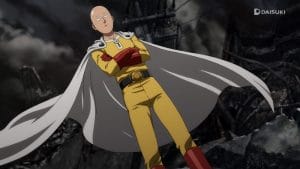 The best part about Saitama is he looks like a boiled egg that put on a spandex costume. He goes bald from becoming so powerful, he barely has any muscles, his face has a simple look to make him look even less threatening, and his posture is slouchy and very frail looking.

He lives in a simple apartment because he’s super cheap. He trains himself to endure not turning on the AC during hot weather to overcome mental limitations, but really to save money. He will literally kill if he missed bargain day at the store.

His physical workout training is the basic training of  someone going through a one week boot-camp. He can kill monsters with one hit, but struggles to kill a small insect, not because of morals, but only because he keeps missing it.

He’s everything I would want in a super hero and more. Which brings up another typical becoming atypical topic. In most super hero stories, the super hero likes to stay disguised and not really take any recognition. Saitama strives to be known as the guy constantly saving the people of City Z. He even enrolls in an organization of heroes to work his way up the hero chain for people to recognize his ability. These are just the few basic reasons why to love Saitama, and his role in One Punch Man.

[divider] The Humor of One Punch Man [/divider] 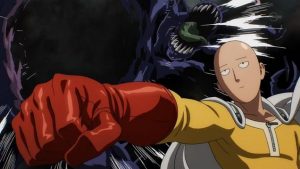 Anime humor can be a bit strange sometimes, but with One Punch Man, it is not only strange, but also well-written relatable jokes. The show almost mocks the whole super hero complex, and makes it way more humorous.

You can imagine fights with a guy who can kill with one punch probably go by pretty fast. Within the episodes, Saitama will have hilarious internal monologues about trivial average day things during epic battle scenes, meet the craziest rivals and allies, and try to make himself known as a big time hero.

Even the villains and friends have great dynamic to their personalities. To see tough guys have such a humorous contrast from being extremely intimidating to hilariously rambling because they know they are about to get their butt handed to them. Not only that, but sometimes their motives for killing and harassing are so ridiculous, they are laughable. Overall, the humor is what had me sold from episode 1.

Never have I ever legitimately laughed out loud at an anime before. Even with all the great humor, there is a substantial plot that intrigues you as a viewer. When it comes to animes, there has to be a good concept story and the jokes have to be so well written. One Punch Man has both of those characteristics.

I definitely recommend One punch Man to anyone, and especially anime fans who have yet to see it. It’ll have you singing the theme song at the top of your lungs, mostly cause it sounds like anime meets Guns n’ Roses. So if that doesn’t convince you even more, I don’t know what will!

You can find volume 1 here.