Last year, the world was stunned when Marvel dropped its first Netflix show: Daredevil. And season 1 of Daredevil worked wonderfully. It told the story of Matt Murdock, who as a boy lost his sight due to radioactive stuff that hit him in the face, but who gained other super senses.

With the help of Stick, an old man who trains him in how to deal with the overwhelming senses, Matt goes on to become an attorney, opening his practice with his best friend Foggy Nelson and their secretary Karen Page. When their law firm can’t help, Matt dons a mask and takes on crime. This puts him at odds with Wilson Fisk, the Kingpin of crime.

Season one ends with Kingpin heading to jail, with Foggy having discovered his secret identity, and Karen nearing an emotional breakdown.

Season two of Daredevil promises to introduce two “street level” characters, one who has been essential to the Daredevil backstory and one who hasn’t. 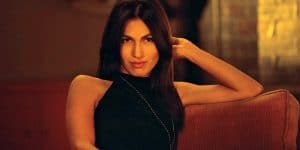 Elektra is a long lost flame from Matt’s time in college. They dated and after a time, she left and when she runs back into him again, Elektra is paid assassin of sorts. It turns out that after her father’s death, she moved to China and studied martial arts.

Elektra is more brutal and lethal than Daredevil which can put them at odds at times. Regardless, in the Marvel comic book world, Matt and Elektra serve as soulmates, so her introduction will create an interesting potential love triangle of Matt, Karen, and Elektra.

How they introduce her and what her role will be should be interesting. Is she a potential paid killer for one of the main gang groups that were established in season 1? How long until Matt has to take her down? One of the best parts of her being in the show should be some fantastic martial arts centered fights with her, Matt, and bad guys. Really, when we knew that Daredevil was going to progress past season 1, Elektra showing up was inevitable.

Less a Daredevil staple but definitely one of its iconic street level characters, Frank Castle aka the Punisher is an interesting choice.

In part, the Punisher is in this show because he was a character that Fox had previously owned and Marvel had negotiated back into its cinematic control. So when they got the rights, they quickly wanted to find a place for him and the dark world of Netflix Marvel is a perfect place.

The backstory of the Punisher is that he is out to punish crime, because after he returned from the war and was living a normal life, his wife and children were killed in a mob hit gone wrong. Introduced originally as a villainous anti-hero in Spider-Man, Punisher became the character in his own titles and would often show up in other hero’s books as well.

The iconic white skull on black shirt is still one of Marvel’s best selling properties, putting the Punisher up against Deadpool as one of the most popular characters.

How the Punisher will fit into Daredevil’s world will be interesting. In season 1, Matt seemed willing to go pretty far in terms of harming bad guys, meaning that unless he has had or is having a crisis of conscience in the second season, it will be unclear how the two of them come to blows. One potential scenario would be Matt needing to take down the Punisher to protect Elektra from his vengeance, especially if she works for one of the mafia groups.

Regardless, though Daredevil could have trimmed a few episodes off of its season 1 run, it was a fantastic show, demonstrating the dark underside of the Marvel universe. If the Avengers is marked by the neon happy colors of Captain America, Iron Man and the Avengers, the world of Daredevil is marked by the darkness and the characters that inhabit it.

Elektra and Punisher should make two excellent additions to the cast and help them propel the story forward, especially if Wilson Fisk is staying locked up behind bars.

D&D: How New York History Can Open Our Eyes to the Lore of Dwarves