The Horsemen of Apocalypse, Nerdsplained

By Michael Adkins On May 3, 2016 Last updated May 3, 2016
Share TwitterReddItPinterestFacebookEmailPrint

The Horsemen of Apocalypse

Apocalypse always runs with a team of four:

These four (usually mutants, but not exclusively so) are Apocalypse’s righthand men and women. In most iterations, whosoever holds the title of Death is the de facto leader of the Horsemen. And the four positions have been held by quite a few over the centuries. Usually the team is comprised of two men and two women, as well – a trait the upcoming film is sticking to.

How does one become a Horseman of Apocalypse anyway?

The Horsemen volunteer their service willingly.  In the case of a few – like Caliban (who wanted more power to avenge his people, the Morlocks) or Angel (who wanted his wings back) – there was something to be gained from serving the mutant god.

Apocalypse makes a lot of promises, and to the bad guy’s credit he tends to keep them.

Others–like Wolverine and Gambit–willingly served in the hopes of sabotaging Apocalypse from the inside.  Unfortunately Apocalypse subjected them to mental conditioning that overwhelmed their resolve and set them to tasks they would otherwise not have done had they remained in control. It took a mighty effort from such telepaths as Psylocke and Emma Frost to break the grasp Apocalypse had on their minds. Others (like Angel in his first incarnation as Death) were jarred free after hurting someone near and dear.

And then you just have the crazies who sign up because they believe Apocalypse is their ticket to world domination. They’re just in it because they think it’ll prove the winning side, and who doesn’t want to win?!

The Movie Horsemen (According to the Comics) 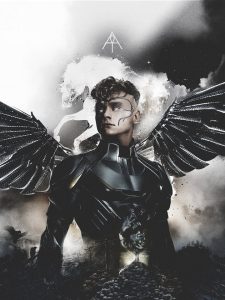 Death  Warren Worthington III – codenamed Angel for obvious reasons – is stripped of his wings via a series of unfortunate events and Apocalypse offers to restore them.  After some some experimentation, Warren’s skin takes on a blue hue (something it doesn’t look like we’ll be treated to in the movie) and he sprouts metal wings, the razor-sharp feathers of which can be fired like projectiles.

In the comics, he beats up all the other Horsemen and thereby becomes Apocalypse’s number one Number Two Man.

Famine To my knowledge and according to my research, Storm has never served as a Horseman in the comics, but she appears to be the first one recruited in the movie.  Ororo Monroe (her real name) is capable of manipulating atmospheric conditions (read: weather).

She served as a Horseman in the final season of the X-Men: Evolution cartoon show.  Speaking of characters who were only Horsemen in that series…

War The first of the mutants we’ve already met in this particular X-Men franchise: Magneto. While he was never a Horseman in the comics, the previously mentioned X-Men: Evolution cartoon’s fourth season featured Apocalypse and his Horsemen and Magneto was among 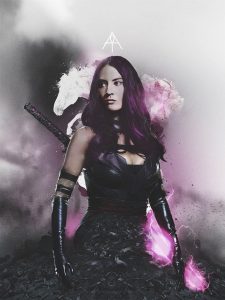 them (along with Professor Xavier, Storm, and Mystique).

His powers were significantly enhanced during his transformation in that show, so that appears to match what we’ll see in a few weeks.

Pestilence Betsy Braddock is the newest Horseman as far as the comics are concerned – not so much taking on the mantle as having it forced upon her by her then beau, Archangel, for the first time in 2011’s Uncanny X-Force #16 and not holding it for very long (about one issue).  Psylocke‘s power set varies greatly depending on where you’re at in continuity, but judging by what I’ve seen in trailers and such she is able to conjure her psychic sword and has telepathic abilities (marked by a purple butterfly shape around her face).

While this particular grouping of Horsemen is unprecedented in the comic canon, it is certainly an extremely formidable grouping of power sets and personalities.  While I’m not terribly psyched about the Ivan Ooze look of Apocalypse and Storm just doesn’t get me excited thanks to Halle Berry’s disappointing and underwhelming portrayal in past movies, I am legitimately pumped about seeing Archangel and Psylocke onscreen. I chose Psylocke as a part of my custom X-Men team build, and while a couple of those members might receive revisions after two more years of comics, she would not.

I actually have some pretty decent hopes for this movie. And I’m pretty happy to see that it won’t be as Wolverine-centric as…well…almost every other X-Men movie ever (First Class being the most obvious – if not only – exception, but, man, did he have one of the best cameos ever in that movie).

Comic readers, there is a new giant Age of Apocalypse omnibus, which is a collector’s dream. The second Age of Apocalypse saga is just 6 issues and provides an easier entry point. And if you are just looking for the coolest horsemen, then Rick Remender’s run on X-Force is the ticket!

Characters You Should Know: Sharon Carter