Con season is upon us. In fact, we are hitting peak con season pretty soon and as I prepare for my first nerdy convention of the season, I realized that packing and preparing is now second nature for me. In fact, packing for a regular vacation seems lacking now.

So, while we have a list on how to get the most out of DragonCon, I wanted to do a general preparation post for people who may go to cons but not DragonCon.

We decided late last year to attend Magic City Con in Alabama. It’s their second year and we are super excited. A good number of our DragonCon friends will be there and the coordinator has been super awesome and open about everything.

But what do you do when you are a week out from a con you have never been to? Well, here’s how to get the most out of a con: 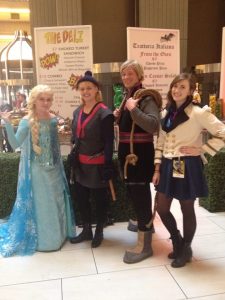 Basically, you have two cosplays you are getting ready for the con. One is a closet cosplay that you’ve done in the past so you are just sprucing it up. The other…looks like scraps of fabric at this point.

The week before con is stressful. You’ve had 6 or more months to prepare but suddenly everything is going wrong.

You’ve lost your tomato of pins.

The spray paint is dried up.

The hot glue is not gluing right.

This wig is stupid! I hate it!

Where did my thread go?!?

Many have been in the same boat as you. I promise. Morgan is at this point right now. I’m at this point. The red spray paint I got for part of my weapon looks like crap. I had to paint it by hand. My nails look like my nail polish has been on for five years.

We paper machéd part of my weapon last night. It refused to dry. I finally sent Morgan home and fell into bed. She just texted me that she did the same. Which was not her plan. She has armor to make. We leave in 5 days.

I’m an adult living in a world of student loans and adult bills. I have less money today with a full time job than I did when I was 16. Eating at this con is going to be interesting. But that’s okay. Because I’m gonna meet Jennifer Hale and buy stuff from artsy friends.

And I’m gonna look amazing because my cosplay will be finished and awesome.

My friends will look amazing because their cosplays will be finished and awesome.

I’ll just be a little more broke after the con.

I’ve come to accept it. 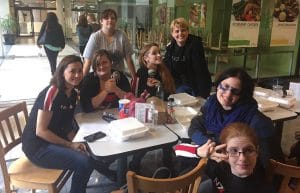 One way to save money is to pack snacks and breakfast foods so you don’t end up buying all three meals while at a con. Pack water, chips, candy, Pop Tarts, whatever.

Don’t pack it with the intent of eating it and it just sits in your bag all weekend. You won’t save money that way.

Also, you may get hungry at 10 am or 4 pm. You plan to meet for a meal in two hours. Eat a snack. And don’t pay for said snack. At least, not at con prices.

The con starts on Friday and it is now Wednesday night. You call your friend and ask what time y’all are leaving on Friday.

“Oh, well, our hotel reservation is for Thursday. We need to leave Thursday afternoon no later than 1 pm.”

Have an idea of when you will be heading back home. And who will be driving and navigating. Who gets car sick. Who has to pee every 20 miles.

Being in costume is awesome. I love it.

But it gets hot.

Make sure you have a pair of jeans or shorts and a few nerdy t-shirts just in case you want to take off the costume and mingle with the non-costumed folks. 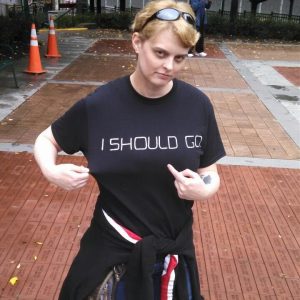 Also, make sure you pack the essentials but don’t over pack. You have to make sure you have room for the accessories you need for each costume, the weapons, the boots, the wigs. But you also don’t want to break your back getting it out of the car.

And packing it back up after the con is a pain in the butt.

And the most important part of this is Have Fun!!!

No matter if you aren’t in cosplay, you have a store bought costume, you have no money, you’re sick, whatever. Have a blast. You are with like-minded people. And that doesn’t happen every day.

You’ve probably paid a good amount of money to be there. Get the most out of it.

I’m sure you’ve heard of the “con crud”. This happens when you have so many people in such a small space touching, coughing, sometimes licking everywhere. It’s no fun. I’ve gotten con crud a couple of times.

Don’t let the crud make you miss the con. Take some Airborne with you. Wash your hands. Take a shower. Don’t lick people.

Unless they say it’s okay to lick them.

Stay healthy, open to anything, and happy. Sleep when you need to but don’t sleep all the time.

Attend everything you can. From contest, to panels, to parties.

This is why I take the day after con off work. I have to recover.

So, there it is. A quick, general guide to con going.

What do you do before a con? Let us know in the comments!