I have said this before, and I will say it again, we are living in the golden age of Nerd movies!  This year is already loaded and the best is perhaps yet to come.

We have already seen a terrific offering from the Marvel franchise, then we got the birth of the Justice League portion of the DC cinematic universe, as well as a new movie in the X-Men line, and we are only to June!

With a full slate of movies yet to come, I have to say the one I am waiting for with great anticipation is Star Trek: Beyond!  If you haven’t seen the first trailer, here it is:

While I was never HUGE into the James T. Kirk Star Trek—they were a little bit before my Nerd time—I was a fan of the Star Trek: Next Generation series and familiar enough with the original cast that I was excited to see that franchise rebooted. Especially with J.J. Abrams at the helm.

J.J. has earned some serious cred due to his successes with Star Trek and Star Wars, but if you followed him before, you really should have had little doubt. Abrams’ company Bad Robot does stellar work, and at this, few can deny him as one of the top directors, producers, writers and cinematic developers of all time. 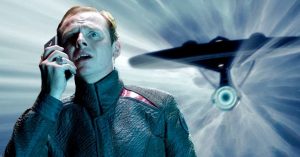 And I liked the Star Trek reboot film very much. I like what they are doing with an alternate time line by having the legendary Leonard Nimoy be part of the first two offerings, may he rest in peace. Into Darkness is perhaps in my top 7 favorite Nerd films of all time!  I think it will be especially difficult to outdo that film.

That said, I am very excited to see where we are going on the pens of Simon Pegg and Doug Jung. I am not so familiar with Jung, but I am a HUGE fan of Simon Pegg! I doubt we get a quintessential Pegg fill such as Hot Fuzz or Shaun of the Dead, but I am sure it will be enjoyable nonetheless.

Pegg is also a member of the perfectly cast group of actors and actresses in this franchise. With such stars as Zachary Quinto and Chris Pine playing the dynamic duo of Spock and Kirk to a new perfection, these movies offer enough nods to the old school fans and a fresh new arc which is easy to follow for the next generation of fans.

In this film we will also see the addition of Idris Elba and rising star Sofia Boutella and in typical sci-fi style they are completely unrecognizable aliens. So unless you looked it up, you would have been hard pressed to figure out who they were!

This film takes the crew out into deep space, where they meet Jaylah (Boutella) and Krall (Elba) when the U.S.S. Enterprise is almost destroyed, marooning—and dispersing—the captain and his crew on a hostile alien planet.

My understanding is that this film may have a lot of content nods towards the Deep Space Nine series.  I am not very familiar with DS9 either (man I have a lot of nerd blind spots) but I am sure J.J. Abrams will be behind something that the biggest Deep Space Nine fans can get on board with. 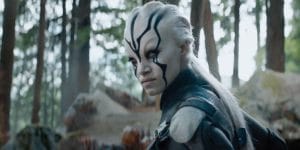 From the trailer we also see that Spock and Dr. Leonard “Bones” McCoy seem to be paired up and this should add for some interesting dynamics as Karl Urban’s well played “Bones” and Spock are not always on the same page when it comes to methods or actions. The banter between those two might be terrific given their opposite ends of the emotional spectrum as well.

While Star Trek has always been primarily about the captains, I think what has made this such a long running franchise are the secondary characters. These movies are no exception. When you look at this crew and see the well casted group of Scotty, Sulu, Uhura and Chekov you see a dynamic and endearing bunch.

While Chris Pine as James T. Kirk can carry this franchise a long way on his own, it is hard for the average person to relate to the magnanimous leader type, we can all find someone in the crew we do very much relate to.

So as the Star Trek franchise gears up for the next offering I am especially excited to see the development of the secondary characters. We have only yet scratched the surface with crew members such as Checkov and Sulu, who are primed for a little more screen time going forward!

I can’t wait until opening night.